The 8th at Pebble is my favorite hole on the course. There isn't a better over the cliff 2nd shot anywhere I've played!

Here’s the third installment of my stories from working at Pebble Beach. If you missed PART I or PART II click on the links to view. The baseball players are easily the most entertaining group of characters that I saw stumble their way the through the golf course. The best part about the baseball guys is that they show up to the first tee smelling like booze at 8-9AM. No other professional sports group drinks nearly as much as them. They will often ask you to grab them a bloody mary to cure the hangover before their round. It’s pretty funny when the mini-store they have at the resort runs out of booze EVERY time they come to town. The only times I saw the store sold out was during tournaments or when the baseball players were there! Another fun part is watching the baseball guys BOMB their drives.  They are one of the groups that plays a lot of mini golf games while at the resort such as scrambles/best ball/elimination games throughout the week. I always would volunteer to be a judge for the events and got to most of the time. Anyways, with spring training in full swing here’s my most notable memories from the always fun, MLB players.

Although there were complaints of someone leaving fecal matter in the elevator on this very night, but nobody owned up to that one, so it will be a mystery forever. We just know it had to be one of the ball players. It might be a coincidence, but  the two times that Boone came to Pebble, I saw him occasionally over their week, and about 6 of the 7 times I saw him, he had a cocktail in hand. I remember helping him in the morning of the particular day of the “incident”, and he was dropped off in the front area where the bag drop is. He had a cocktail in hand, and already had that drunk lazy eye look at 8:30 in the morning. Not surprising by any means, but he was slightly ahead of pace on this particular morning if you know what I’m saying.

Anyways, fast forward 16 hours to a little after midnight. Brett Boone and another player that was never identified to me decided to start a bonfire just outside his hotel room at Spanish Bay. A good chunk of landscape got burnt luckily not any fairway, and also a little of the building had some charring on it. This extremely smart idea no doubt came from some heavy drinking, and earned Boone a $20K fine for fixing up the damages. He also received a ban from the resort. In case you were wondering why so many athletes go broke, this could be another good example of why…

Adam Dunn – He holds the title for the best golf shot I’ve ever seen by a non-golf professional. We were doing a scramble, and I was the judge for the six pairings (twelve players overall). Basically, the game was; the two worst scores are eliminated on each hole, each pair had players alternating shots, when there were three teams left it went to a single elimination for each hole. I can’t remember who Dunn’s teammate was for this mini game, but there were only three teams left at the time of the shot. We were on the par 4 15th hole at Pebble. Dunn was hitting his fourth shot, and it looked like the other two teams had VERY make-able par chances(Neither groups made them). He was about 45-50 yards out, and he hit his shot a mile up in the air. It bounced on the green once with a little backspin slowing the balls speed after it touched down, and on the second hop it went into directly into the hole. His 50 yard chip in saved them on the hole, and they eventually won the scramble. It very well could be the only time I’ve really seen Dunn win! Sorry Reds and Nats fans, pun intended. 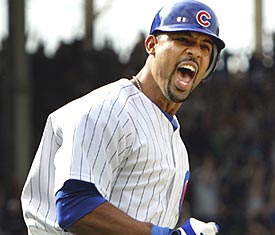 Derek Lee – The longest drive I’ve ever seen on the 18th hole came from Derek. I’m not sure exactly how far it traveled, but it went close to 400 yards. It was past the trees that are supposed to give you trouble on your second shot. It was a shame he wasted that monster drive by shanking his second shot into the water to the left of the green, but hey, most of us would be happy with just having that first shot… A side note on DLee, my buddy in guest services wouldn’t accept any of his money/tips from him all week while “hooking” him up with upgrades to his room and things of that nature. At the end of the weekend, he sent my buddy to the pro shop to get fitted for clubs and sent him a brand new set of Nike golf clubs. My friend couldn’t turn that down! I’ll always root for him no matter how much he struggles or how much Chicago fans rip him, he just made that good of an impression on me!

Cory Lidle – I was debating whether putting a negative on the deceased was in bad taste, but essentially I’m just telling a story. Also, it’s been two years since the plane crash, so I figure enough time has passed. It’s a shame my memory of Lidle was the most horrid display of putting I’ve seen. I could really see two year old throwing a ball at the hole and getting as close as him. He missed so bad on one putt he was slightly off the green after it. He took his time setting up these putts, and seemed to put some genuine effort into the shots which made it more perplexing. Something just wasn’t clicking, I felt bad for the guy. He ended up four putting that green, and the one that actually went in, was a rocket that he was lucky it stayed down. Maybe he didn’t care or was just THAT bad at putting.

I'm a dude that just hit 30 years old. Pretty much like everything that is funny, insightful, and has to do with the Warriors, A's, and Raiders. END_OF_DOCUMENT_TOKEN_TO_BE_REPLACED
This entry was posted on Tuesday, March 2nd, 2010 at 10:09 pm and tagged with 2010, Adam Dunn, AT&T National Pro Am, bad putting, Baseball, bon fire, Brett Boone, corey lidle, Derek Lee, drinking, funny, golf, long drive, MLB, Pebble Beach, Spyglass, stories, US Open and posted in Pebble Beach Stories, Sports. You can follow any responses to this entry through the RSS 2.0 feed.
« UFL Moving Two Franchises
John Tesh’s Greatest Contribution To Mankind »