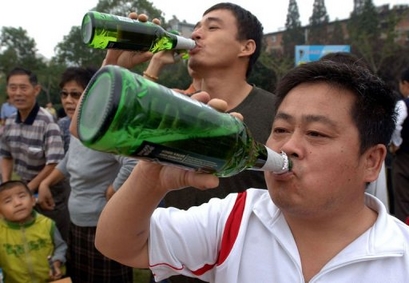 Believe it or not, this is NOT Chappy and I getting our drink on.

I usually start every non-sports related post with an apology, but not this time. If you like sports, there’s a 98.5% chance you like beer. The two go hand in hand. Well, maybe beer goes hand in hand with everything. You might notice a little West Coast bias in this list – much like everything else we write about on Doin Work. It’s also affected by the fact that breweries I’ve visited tend to skyrocket up my personal power rankings. But I also truly feel that the best beer is brewed along the Pacific. If it’s from California, Oregon, or Washington, I’m usually on board. So, apologies to fans of Allagash, New Belgium, or Victory Brewing Co. This list isn’t for you. Well, maybe it is. Maybe it’ll inspire you to step up to some better beers. First I should introduce my taste. I’m a fan of Pale Ales, IPAs, and Pilsners. If the mood is right, I can appreciate a good Porter or Stout. What you won’t catch me enjoying is a Hefeweizen or White Ale. If it’s brewed west of Germany / Denmark or East of Colorado / Montana, I probably won’t like it. (If I’m truly missing out on something, let me know. I’m not too proud to prove myself wrong) I don’t claim to be a beer science expert. You won’t hear me talking about aromas and finishes and what not. I just like what tastes good. I used to feel like the hoppier the better, but I’ve since been proved wrong. There’s a fine balance.

This is the equivalent of the NFL Draft’s “Mr. Irrelevant”. I can’t honestly say that Santa Cruz Mountain Brewing is the 10th best brewery in the world, but it makes my list because it’s the one brewery taproom I’ve been to where every single beer I tried was flawless top to bottom. Like many of my brewery visits, this place was a completely impromptu stop on a weekend road trip. I don’t even know how we

found the place – I had never heard of it before that one random weekend in Santa Cruz. We must’ve just seen a sign on the side of the road or something. Anyway, it felt like we were hanging out in a trailer where they served beer out on a farm. Okay, that description doesn’t really do it justice. I had a phenomenal afternoon on a Sunday drive home to San Francisco circa 2006. What’s funny is that was the only time in my life I ever drank Santa Cruz Mountain beer….. until recently. I stumbled upon an Organic Dread Brown Ale at a BevMo somewhere in the last year. I’m pretty neutral when it comes to Brown Ales, (I still think Newcastle does it best) but this one excels. Like I said, everything top to bottom is solid.

These guys are poised to start jumping up on my list. I seemed to stay away from their beers for a while, perhaps because of something so simple as boring labels. To be honest, Grand Teton brews don’t really

stand out. But every one I’ve tried to this day has been great. If anything, you know them for Bitch Creek. It’s an average ESB, but their real gem is the Sweetgrass American Pale Ale. That’s some great stuff. I’m also a big fan of the seasonals and limited releases of late, thanks to my local grocery store being of the boutique fashion. There are three from Grand Teton that stand out in my memory. The Pursuit of Hoppiness Imperial Red and the Trout Hop Black IPA were particularly good, but it was two days ago when I had the beer that would forever cement Grand Teton in my top ten. I was perusing the beer aisle when the Persephone Imperial Pilsner called out to me. I tell you it was glowing on the shelf. Time stood still. It was $9.99 for a 750mL bottle, but my confidence in this brewery was sky high. They exceeded all my expectations with this one. If you see a Persephone Pils on your shelf, grab it. It’s well worth the ten dollars. Or if you see one of Grand Tetons traditional offerings, feel free to try that instead.

END_OF_DOCUMENT_TOKEN_TO_BE_REPLACED

I feel like I’ve seen this before, but I don’t remember being as impressed with it as I am now. Maybe it’s because American beer commercials are either funny or stupid, or both. 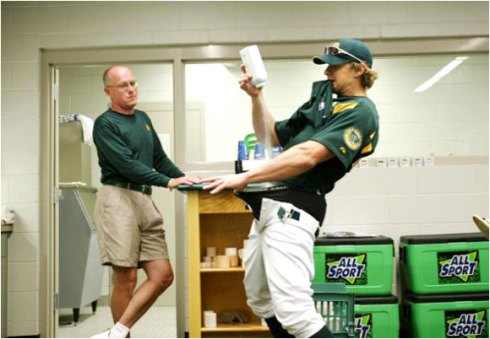 One of my favorite former A’s outfielders, Eric Byrnes, always came to the plate with Burn Baby Burn playing on the PA with Roy Steele announcing his name while he strolled to the plate. Looks like he’s decided to hang up the fast pitch spikes after being cut by the Mariners, and is going to join some of his buddies in some good ol’ beer drinking, and softball. Screw taking a step backwards like our good buddy Jack Cust accepting the demotion to AAA, and being pissed he has to commute. At 34 years young, Byrnes has decided to join the Menlo Park softball team sponsored by the Dutch Goose, and will be the biggest ringer in the Bay Area rec leagues, since Vernon Davis joined the curling squad. I wonder if he can convince old buddy Jermaine Dye to join the league too that would be one solid 3-4 combo in the slowpitch league. I’m also wondering if Byrnes would want to double as a security guard at the Oakland Coliseum. Back in 2005, he didn’t need a security guard with a taser to take down a fan that ran wild on the field. 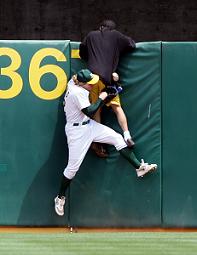 Instead he chased the fan down, and tackled the guy against the left field wall! I can’t find the footage, but here’s a great picture of the incident.

Said Byrnes on returning to the Bay Area to play softball: “This is going to be a blast. Playing with my buddies. I can’t wait for my first hit. I’m going to ask for the ball.” One of my favorite things about Byrnes was that he always hustled. He’d sprint to the outfield every inning, and he’d sprint to first on infield pop ups. I think his major contribution is keeping guys loose, and demonstrating how to give 110%. I do wonder if he will be Mr. Hustle when his belly is full of beer…

Byrnes wasn’t setting the MLB on fire with his .094 average over 15 games this season in Seattle, but he will still make $11M this year, thanks to that awesome deal he got from the D-Backs a few years ago! At the time it was fair market value for his services. My how times have changed, and guys like Dye are rejecting $1.5M to play. I hope he has fun, and isn’t out of my baseball for good. His personality is just too good to keep away from the game. I’m sure we will see him behind the broadcast desk throwing some goofy analysis out there. I see him as the Charles Barkley type, funny, but never loses his true opinion on the subject. 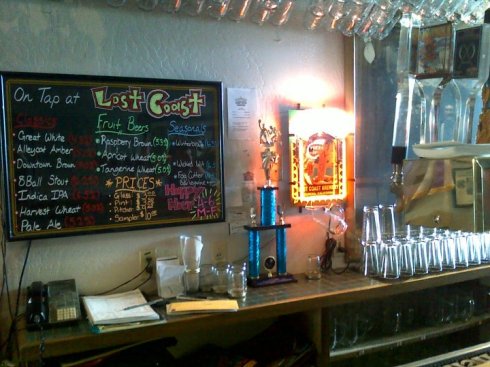 Although Northern California is best known for its wine production, there are some great breweries out here as well to satisfy any beer aficionado. Now I’m not just talking some home brewin’ favorites, there are some legitimately great beers that come out of this area. The most well-known is probably the Sierra Nevada Brewing Company in Chico, CA. Beyond that, there are countless lesser-known breweries in the area that deserve a visit. I’m really not sure why I haven’t made a point to visit all of these by now, but I have been slowly chipping away over the last few years. There’s nothing like tasting an entire catalog of beers directly from the source. This weekend, I paid a visit to one of the more notable breweries in NorCal, Lost Coast Brewing Co. in Eureka, CA. Lost Coast is one of the original North Coast beer producers, and arguably one of the finest. The problem is, I’ve never really liked any of their beers. I wanted to like them, because I think they make really good beer, but the problem is none of them seemed to be suited to my tastes. I made a stop in yesterday hoping to find a diamond in the rough – a Lost Coast beer that I could truly love.

They are best known for three beers: Great White, Alleycat Amber, and Downtown Brown. I’m not a fan of white beers, but damnit if I don’t respect Great White. It’s very well made, it’s just END_OF_DOCUMENT_TOKEN_TO_BE_REPLACED