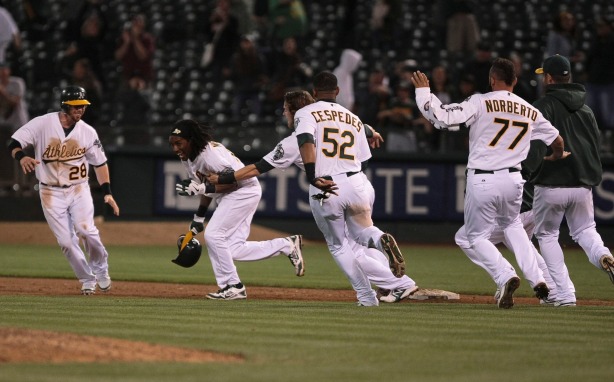 Last night I went to the A’s vs. Rays 5 hour marathon that ended in a surprising 12th walk off win for the A’s. The highlight other than the walk off sac fly was either seeing Cespedes fly around the bases or the seemingly standard outfield assist from Reddick. As the innings rolled along was thinking about the good things that come from having a dive park. One, you never have to worry about a game being sold out (except against the Giants), and two, you can get in for under $15 and sit in pretty good seats or at least move to some. Also, the fans that go to the game seem genuinely into the game opposed to the other parks I’ve been to where cell phones seem to rule the stands.

Anyways, bear with me, because sometimes I stray on my A’s posts due to extreme excitement. I wasn’t disappointed to see the A’s not make any moves at the deadline. Even though the Angels and Rangers made big splashes with their pitching acquisitions of Greinke and Dempster. In Beane we trust, and if he didn’t see the right deal for the A’s there probably wasn’t one. Plus the A’s already made their moves in June right around the time they started taking off. Waiver claims on Travis Blackley and Brandon Inge have been huge boosts while giving up nothing. Everyone they’ve called up from the minors seems to help in one way or another. If for some reason they need help in the starting pitching department when the rookies hit their limits or break down a little, they currently have SP Dan Straily waiting in AAA and he’s the #1 rated prospect in all of baseball according to ESPN. They also have proven pitching in Dallas Braden, Brett Anderson, and Brandon McCarthy all rehabbing from injuries. The only obvious place they needed an upgrade was shortstop, and last night recent shortstop call up Brandon Hicks hit a game tying homer. Hicks also had a walkoff in his third game with the A’s. One of the many examples of the A’s stumbling into found money in their system this year.

Everyone says the A’s need another bat, because they have the worst BA in the league, but when you get past the BA there’s a lot of good things going on. The BA statistic can be misleading, because since early June the A’s aren’t bad on offense, and the big reason their BA is so low is because of a dreadful April and May where they only averaged just over 2 runs per game. During their current July streak they only trail the Yankees in homers for the month, so standing pat is more and more palatable when they’ve gone from last to eighth in a month and a half in homers hit in the AL. Chris Carter’s emergence has been crucial to protecting Cespedes in the lineup, as he’s finally showing the patience and power that had A’s fans so excited about his Ryan Howard type potential when they acquired him in the Dan Haren deal.

Some think the A’s will fade as the season gets into August and September, but weren’t they supposed to fade when they had to play the Rangers and Yankees? Wasn’t the fairy tale story supposed to fade when they went back east to play Baltimore and Toronto last week? I know that the team has over achieved at least a little, but at some point you have to accept it as fact over a trend. Even last night I felt like Melvin out managed one of the best managers in the game in Joe Maddon. A big question I have is why doesn’t Cespedes get any love for helping turn this team around. Since he returned to the lineup on June 20th all he’s done is hit over .350 with 9 homers and 30 RBI’s. I get it, Trout is the MVP and ROY, but it seems like Cespedes should be getting more press than he is. Especially with the A’s sitting a half game ahead of the Angels in the standings, and a HUGE reason for that has been because of Cespedes’s play.

Quick side tangent, if the A’s, Rangers, and Angels all make the playoffs it will be the first and only time 75% of a division makes the playoffs. The reason it would be the only time is because of the addition of the 2nd wild card and the Astros will be joining the AL West next year, which will make it impossible to happen again.

I'm a dude that just hit 30 years old. Pretty much like everything that is funny, insightful, and has to do with the Warriors, A's, and Raiders. END_OF_DOCUMENT_TOKEN_TO_BE_REPLACED
This entry was posted on Tuesday, July 31st, 2012 at 2:48 pm and tagged with Baseball, MLB, Oakland Athletics, trade deadline, walk off, winning and posted in Sports. You can follow any responses to this entry through the RSS 2.0 feed.
« Pump It Good
If you can’t beat them, bite them »