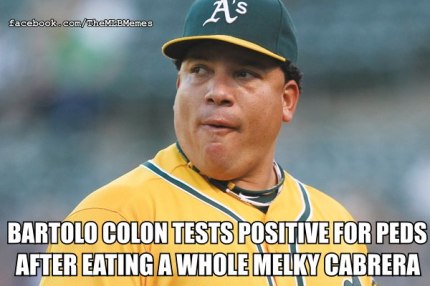 I'm a dude that just hit 30 years old. Pretty much like everything that is funny, insightful, and has to do with the Warriors, A's, and Raiders. END_OF_DOCUMENT_TOKEN_TO_BE_REPLACED
This entry was posted on Thursday, August 23rd, 2012 at 1:35 pm and tagged with Bartolo Colon, kings, Maloofs, MLB, NBA, Oakland A's, Oakland Athletics, sacramento, testosterone, virginia and posted in Sports. You can follow any responses to this entry through the RSS 2.0 feed.
« The Tear Away
Fans Being Fans »

10 responses to “Bartolo and the Kings”