I was on the road for the past six days visiting family and friends across California. My last stop on the way home was in Monterey. As many of you golf fans out there know, the AT&T Pro-Am is being held this weekend on the Monterey Penninsula. I stopped in to see my old boss at Pebble Beach, and see what condition the course was in. It looked as great as it always does, and made me realize that I haven’t written a Pebble Beach Stories post in a loong time. While I was walking past the putting green I saw George Lopez, and it reminded me of how cool some of the celebrities are, and George was one of my favorites. Since I’ve worked there, I haven’t seen that many celebs nor been able to interact with them aside from Big Papi in Vegas. Going back to the course and seeing some old co-workers re-reminded me of some of those memories. Since the AT&T Pro Am is 25% about the celebs in the tournament I thought I’d make a nice and not so nice celeb list based on my experiences with them while working at Pebble Beach. Granted some were longer conversations or meetings than others, so some people might have just been having a bad day. On the other hand, how can you really have a bad day if you’re golfing at Pebble Beach?!? I already talked about the Caddies in part IV. I rambled about Derek Lee, Adam Dunn, Cory Lidle, and Brett Boone in part III. I talked about Chi Chi Rodriguez in part II. I talked about Chris Berman and Vijay in the inaugural post of this series, so I won’t go into any details on those guys, and you can revisit those posts to see what happened with them in the links provided, Here’s some things that came to me while I was wandering around Pebble Beach Monday morning. I have more, but these were some standouts. 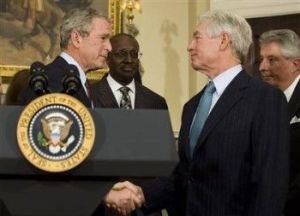 Hmmm, buddies with George huh, one more reason for me to dislike him...

Charles Schwab – Couldn’t be more of a dick, and has earned a place in the HOF of assholes. If there was a less friendly guy that holds onto his money with a vice grip like he does I don’t think I’ve met him yet. To top it off, he never tips. A co-worker of mine once laughed at me when I helped him for a second time in two days. Helping him culminated in driving him out to his $60M dollar house that overlooks the 18th teebox. I got no tip, he didn’t say more than two words answers when I tried to make some small talk with him. This is a man that could drop $1,000 dollars on the ground and not be worth his time to pick it up, and he can’t even give me a five spot. Even worse he couldn’t make small talk with someone doing him a favor!?! Talk to Chuck if you want your money safe, but you never know he might be stealing it too.

Mark Wahlberg – He wasn’t mean per say, but he wasn’t exactly nice either. I’ll just say his arrogance isn’t overblown. He’s the type of guy that lives up to his reputation. One time I was helping people with their practice round tee times, and he kept insisting I get him on earlier. I told him he had to talk to the players that already signed up, and he said that should be my job. Somewhat true, but I didn’t have a single other complaint that day on tee times, making me hate him, and having him be my only problem child of the day. 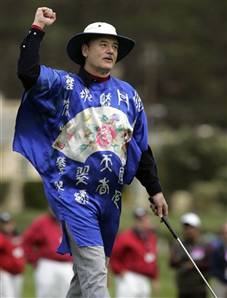 Even though it was Chinese New Year's when he wore this, I'm still offeneded.

Bill Murray – I guess I can’t really say I dislike Murray, but the few encounters I had with him at the AT&T it felt like he was trying waay too hard to be funny. I get it you’re a comedian, but at the same time, that doesn’t mean everything you do should be a joke. Please just answer the question without getting all witty on me. If I was a pro playing with him, I’d be pissed when he pulls out the putter pony ride. You’re not Happy Gilmore Bill, you don’t drive it 450 yards.

Kenny G – Great golfer, with a great swing. Unfortunately for Kenny, he lacks much of a personality. Either that or he’s so eccentric that not saying more than one word answers to you when you try to make small talk with him is a type of artistic statement. I can’t quite figure it out…

Dina Eastwood – Clint Eastwood own’s Carmel basically, and his wife acts like she does. I actually only ran across her once, and it was when she asked me to get her some water even though I wasn’t working or in work clothes. Can you tell where this rant is going? Yup, my friends that worked at the Beach Club by the 17th hole dealt with her all the time. This is a shout out for them to turn the other way if Dina is walking your way. Nothing will be good enough, and you won’t get tipped, so just get out of the way when she’s on the loose.

Justin Timberlake – I hated this guy at the time he came in. I was probably in the usual I hate boy-band dudes mode, and didn’t think I’d like him when I saw him on the tee sheet, but after meeting him he was about as cool as you can be for a young rich guy that gets every chick he wants. He was pretty much the anti-Mark Wahlberg. He also hooked his caddy up with a $2,000 tip for the day so I was told.

Cameron Diaz – There’s no way to hold her off the nice list. She tips well, she is friendly with everyone and the bubbly personality you see on TV/movies is basically how she is in real life. I thought she might be just an actor as far as the golfing goes, but she scored a par on the first hole at Pebble, so that settled that quickly. She looked better in person than she does on TV, simply amazing.

Samuel L. Jackson – He came to Pebble to craft his skills for a three month stint. I’d see him regularly, well, I chatted with him six or seven times at least. 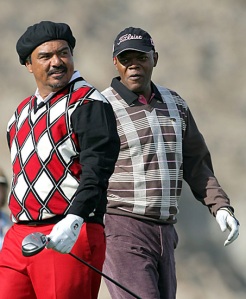 He’s a really nice guy, he gave me a Bluetooth lesson back when they first came out. I thought he was talking to me on the driving range, but was talking to his earpiece. He was also a good tipper, I got a few $20’s off him for not really doing anything aside from telling him where something was or somewhere to eat.

George Lopez – Probably the nicest regular we had coming in. He owns a home in Carmel so it wasn’t surprising to see him in there a lot. He’d often crack jokes at our bosses, and although I don’t really like any of his shows, he’s a funny guy in person. He’s pretty famous for making it rain on the 18th green after his round during the pro-am. He makes it rain with $20’s too. One day I took him to his car, and he hooked me up with a C-note. I told him that was too much, and he said “Everybody’s gotta eat man”. No matter what people say about his comedy, I’ll always be a fan of his.

Tom Brady – Ok, I couldn’t make it through the list without putting one athlete in, and this was my highlight of the month or maybe even that year when it happened. I hate Tom Brady on the football field, but in real life he is a very nice guy. I was working at the driving range during 2004 when the Patriots were out of the playoffs, and told everyone that we were closing down soon. Everyone left except Brady who was chatting with his caddy about his round. He started playing a little catch with his caddy, and since nobody else was really around except me and a co-worker cleaning up, I called for Tom to throw me a pass and took off running. He hit me in stride unsurprisingly, but surprisingly I held onto it. As little as I root for Brady, I can always say I caught a pass from a Super Bowl quarterback. He also took my recommendation for a restaurant over his caddies.

Jim Irsay – The Colts played the 49ers one weekend, and Irsay thought he’d hit up a round of golf. Just like Timberlake is the anti-Wahlberg, Irsay was the anti-Charles Schwab. He was standing out front of the bag drop like Jim Carrey in Dumb and Dumber handing out $100 bills to anyone that wanted one. I pointed him in the direction of where he was supposed to check in and got a $100 for that informative bit of info. This is how you’re supposed to roll when your rich Chuck. Please take a lesson from Jim on how to not be a dick, and spread the wealth.

I'm a dude that just hit 30 years old. Pretty much like everything that is funny, insightful, and has to do with the Warriors, A's, and Raiders. END_OF_DOCUMENT_TOKEN_TO_BE_REPLACED
This entry was posted on Tuesday, February 8th, 2011 at 4:38 pm and tagged with At&T pro am, big tippers, celebrities, cheap skates, golf, Pebble Beach, stories and posted in Pebble Beach Stories, Sports. You can follow any responses to this entry through the RSS 2.0 feed.
« Doin Super Bowl Lines
Sick Day Special »