Twinkies Get Their Cream Filling 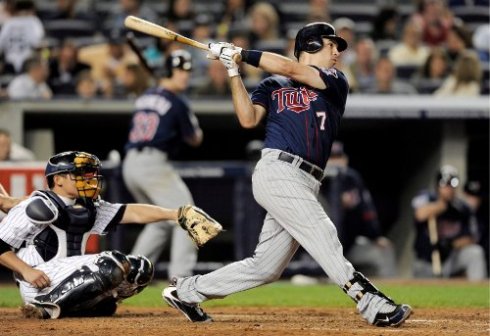 Yesterday the Twins decided to avoid having the elephant in the locker room all season long, and locked up their free agent to be and Minnesoootan God, Joe Mauer. He signed there with a no trade clause for the next 8 years for the generous hometown discount of $184 million. Locking up far and away the best catcher in the game doesn’t seem like a bad idea. It’s been highly debated if it’s worth using that much of the franchises total salary on one player. At first I thought it was pretty bold maneuver tying up all that money in one player, but after looking at it further there were some other factors that left me feeling like this was a good move for the Twins.

Getting this deal done well before he was a free agent most likely did get them a discount, believe it or not. If they had held off on the contract talks until the off season, they may have had to pony up an A-Rod type salary ($275 million) to keep him in a Twins uniform, and it would’ve been a distraction all year long. The Twins shifted from their normal MO of letting star players go via free agency, and signing one of their home grown talent must coincide with the grand opening of their new stadium, which looks pretty cool I must admit. It’s been reported that Minnesota’s payroll could hit the $100 million mark as soon as next season pushing them out of the small market team division. If they get five solid seasons out of Mauer behind the plate, and throw him on first base for those last few. He could be winning multiple batting titles. If it pans out that way, the Twins would sign the contract twice over. He could also be the next Eric Chavez, but I hope not for his sake. Will he stay healthy? Who knows, I’m not Nostradamus. My question to the league is, when are the A’s going to get their new stadium built? We were so close, and it fell off the table. We really want to sign some players to ridiculous contracts too!

Glory Glory Hallelujah! The Warriors Are For Sale! 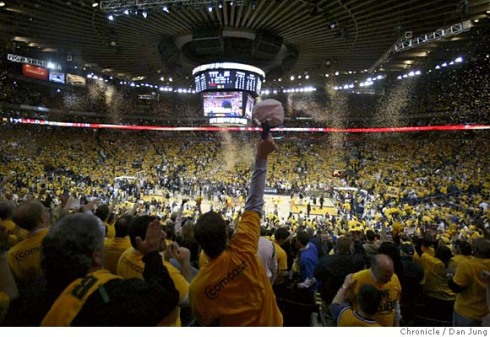 Finally Dubs fans have something to roar about at Roaracle!

I’ve waited my whole adult life for this moment, and the possibility of my favorite team being sold to an owner that cares about the team could truly happen has made this a great Monday! The words “great” and “Monday” aren’t in the same sentence very often, unless your watching an ESPN MNF commercial, but today is special. It was reported just hours ago that owner, Chris Cohan, has hired Galatioto Sports Partners to assist him with the SALE OF THE WARRIORS! A team that is in the fifth largest market in the NBA is hoping the bidding will go over the $400 million mark. Personally, I think that’s a little high, because the Bobcats just went for $275 million, but I’m far from qualified to tell you what a teams’ value is. I’d think it would make it more difficult to get what the price he wants since there is the pending lockout looming large over every possible future franchise owner. Apparently there are more buyers in the running than the only previously reported one, Larry Ellison. We know that Ellison will be in the mix in the bidding war, since he previously had said he was interested over the past year plus, but also had said you can’t buy what’s not for sale. Now that they are, so let’s hope he can assume ownership of the team.

Despite owning one of the worst records in the league, the Warriors draw the 13th best attendance in the NBA. This is just one more reason this is great news for the best fans in the league that pack Roaracle on a nightly basis. We now actually have something to cheer for. Their first order of business when the team gets it’s new owner should be to rehire Chris Mullin. We need him back in the front office making smart personnel decisions. He was the main catalyst to getting together that very exciting 2007 team that upset the Mavs. Yesterday, there was no hope for the future outside of Curry, today the possibilities are endless!