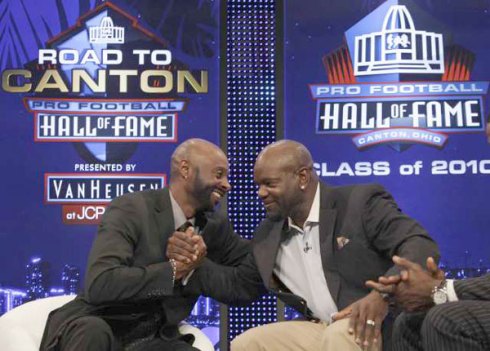 The day before the Super Bowl we were made aware of the players that were going to be enshrined into Football’s Hall of Fame. Obviously there were two of the best offensive players of all-time in Emmit and Jerry that were a lock to get in. It was pretty cool to see how choked up they got when they were named to the HOF! You could truly tell that they were genuinely honored by the induction from their interviews, and the anti-Jordan speech will surely come at the ceremony. I’m a huge fan of the professionalism that Emmit and Jerry showed on and off the field, getting it done without being pre-madonnas. I have to admit I didn’t like Jerry for much of his hayday in a Niners uniform. Mostly because I was surrounded by Niners fans, and was constantly reminded of how good he was. Not to say that I liked the Cowboys or Emmit, but since they did shut up the Niners fans up here and there, I didn’t mind them nearly as much! All that changed when Rice went to the Raiders and helped us get to the playoffs. Too bad his work ethic and love for the game didn’t rub of our young guys like Jerry Porter, but oh well. 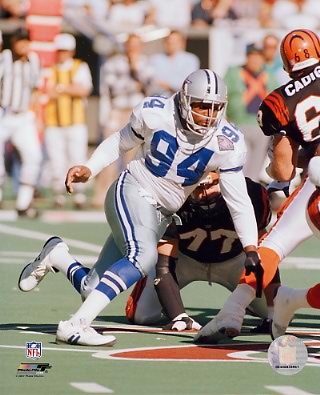 The thing that gets me about the Football Hall of Fame, is the voting. I’m not sure exactly what the selection process is, but I feel like there’s a ton of guys on the ballot that are as deserved as the guys that got in. I understand if you don’t let a guy like Tim Brown in, because it’s his first year of eligibility, but if he doesn’t make it next year that’s NOT cool. If for some reason Chris Carter and Tim Brown don’t get in, I won’t feel the HOF is a valid achievement. They were easily top 10 recievers of all time, and if they didn’t play in the same era as Rice, they would be close to the top all time receiver. So here’s my list of guys that should have gotten in over Rickey Jackson who wasn’t even the best linebacker on those late 80’s Saints teams; Tim Brown, Chris Carter, Charles Haley, Eddie George, Shannon Sharpe, and Kevin Greene. I’d say one of the biggest snubs was Haley, since they seemed to pick out of a hat on who to let in. The guy was flat out dominant for the Niners and Cowboys and has five rings!?! He was an integral part of the defenses that won those Super Bowl’s, and I feel that he was better than John Randle that DID make it in. I’d say that Dick Labeau and Floyd Little shouldn’t have made it in, but I never really saw them play since their careers ended before I was born. Based solely on their numbers I wouldn’t have voted for them, if I had actually had a vote. I guess you could give Labeau some credit for his coaching career after playing, and built up the Steelers defense to the way it is today. I think the NFL needs to make an eligibility length like there is with baseball’s HOF, because if these guys haven’t made it in on their first 20 tries, they shouldn’t be elected in. Seems like a fair rule to me, especially because I made it up. Another thing that bugs me about the NFL enshrinement, is that they are required to elect 5-7 guys each year. Instead of just picking out of a hat, they should consider just allowing the best to get in no matter how few or many guys it happens to be. I feel like some of these inductions are rendered meaningless, since they weren’t even the cream of the crop in their era!