All-Star Saturday night is just 48 hours away now, and the Dunk Contest is always the make or break event of the weekend. It’s definitely had its share of ups and downs over the course of the last 20 years, even taking two years off, due to a lockout and a season in which the contest was shelved, before Vince Carter single-handedly brought it back. The Dunk Contest is like Christmas. Sometimes you get great presents, most of the time you get some good and some bad, and some years you walk away with nothing more than a stocking full of coal. That’s what the 1995 Contest was…. a stocking full of coal. First off, the list of competitors reads like a 1995 D-League all-star team, even though it didn’t exist back then. Sure, you had the two defending champions, Isaiah Rider and Harold Miner, but the average basketball fan would be lucky if they could remember more than one of the other guys. There was Antonio Harvey, who was actually an opening night starter for the Lakers in 1993, alongside other Laker legends like Trevor Wilson and Tony Smith. There was Tim Perry, who was traded to Philadelphia for Charles Barkley (along with a couple other guys of course). There was Tony Dumas, who believe it or not, was the second best Dumas in the league that year. And then there was Jamey Watson, who to be honest, I haven’t thought about probably since 1995, if not before. He’d be a great RFP of the Day, except he really WAS forgotten. Watson’s first dunk on this highlight reel pretty much sets the tone for the contest as a whole. It looks like a warmup dunk. Even Rider and Miner, two of the best dunkers of the decade, seemed to leave their ‘A’ game at home. I truly believe this contest was the one that got the wheels turning in the league office to think about canning the event. Here are the highlights. Enjoy….. if you can.

Tim Lincecum, the two time Cy Young Award winner, is going to be arbitration eligible for the first time in his career. He obviously deserves to get paid, and there really isn’t any reason for him NOT to demand boat loads of money. The Giants wanted to give him $8 million in his first year of arbitration eligibility, but Lincy’s camp wants around $13 million. We debated in an e-mail chain what the Giants should do. We had someone that isn’t a part of Doin Work crew, but is a huge fan Giants fan, and is under the name Lincy Lover.

Lincy Lover: They should give him $40 plus million, in essence buying out his arbitration, and move on.

Cali4Dre: I’m curious what the Linecum’s team countered with when they say over $40M…

Lincy Lover: It’s really a matter of what the 2 years after this one are worth, since he’s not getting a dime more than $13m this year, no matter how things shake out.

Cali4Dre: If Lincy wants 3yrs/40M, I think the G’s should offer $80M over 6 years and be done with it…  Maybe that would meet his expectations, and they could sign him long-term all at once (at a discount in the latter years) 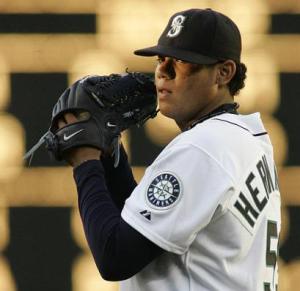 Lincy Lover: That’s less money than Felix and Verlander got, so it’d have to be more like 6 yrs. for $90m, but I like where you’re going with his contract…

Cali4Dre: I realize it’s less money than the other contracts, but the G’s need to at least be diligent in their pursuit of the best deal possible, which it seems they are doing by going to arbitration, otherwise they would have already made a better offer…  and do we really think the Verlander/Felix contracts will have a huge say in the outcome of Lincy’s hearing?  Tough to say…

Dyslecix: Would this already be done if Zito wasn’t on the books ($90M plus over 6 years)? I’m going to say yes, the Felix and Verlander contracts have a huge impact on Lincy’s deal.

Cali4Dre: Ah, Barry Zito’s contract… The gift that keeps on giving (headaches that is) Well, based on ML experience, both have been in the league longer than Lincy, so it’s not a perfect match for the situation.  The thing that makes the difference is the CY’s (ie. multiple)

Lincy Lover: I’m guessing it would be more if Zito wasn’t in play, but yes, it becomes a no-brainer if Zito’s not in the mix. Zito’s deal is also a problem because his contract is heavily back-loaded, so as Timmy makes more, so does Barry. I don’t see it as huge for the hearing, but if those contracts (along with Zito) are a baseline for any long-term negotiations.

Dyslecix: I’ve been reading a lot more SI of late…and saw this last week… I think the main point is the market has been set by those two, and Lincy, with his two Cy Young Awards, has all of the leverage at the table. I see that being the biggest thing.

Cali4Dre: I think besides the two Cy Young Awards, maybe a major piece but not the only one, you would also have to look at years in ML (3 to 5-JV and 5-FH) and starting point of their first year.  For JV and FH, according to your article, it was only $7M in year one… He’s in arbitration year one with the Giants offering $8M and Timmy asking for $13M.

Lincy Lover: The reasoning to lock him up now is to hopefully save money down the road, when he could hit the open market and be too expensive to keep, but you’re right, they don’t really have to do anything for 3 years.

Dyslecix: If they wait, his value will only increase….He’s a super star, and will only get better. Lock him up now at whatever the cost.

Cali4Dre: Wouldn’t they just keep going back to arbitration though, with Timmy probably winning it every year?  Might as well have more certainty, and less ill will with your Star… What would it cost the Giants to just waive Zito?  I assume a lot, but not all of the money is guaranteed obviously…

Dyslecix: Interesting…I thought all of Zito’s contract was straight up guaranteed. I heard them going on and on about this a while back when he was shitting on the mound every 5 days, and were discussing waiving him. It’s been forever since I heard that though…

Lincy Lover: Right. Any long term deal is basically buying out his arbitration and pushing back his free agency, but it seems like the Giants are going to be very careful with any hearings and stick to numbers and precedent, so not sure how much ill will can build up. All money in baseball is gauranteed, and zito’s due about $83m over the next 4 years, and i think there’s even an option for another year that the giants would buy out for $7m. f-me.