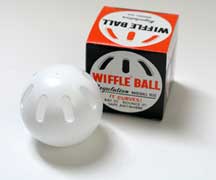 Exciting news out of the Northeast as Golden Stick Wiffle Ball is expanding next year. A little less than a year ago, a couple friends and I were having a couple beers, perusing Youtube, when we came across some videos of guys throwing ridiculous stuff with wiffle balls. We were amazed at the junk you could throw with those little plastic balls. A couple minutes later, we were out in the alley by my house throwing unhittable breaking balls to each other until 2am. I looked into Wiffle Ball leagues in my area and was surprised to find there are none. Chappy suggested Fast Plastic, a league he had played in previously in the Los Angeles Area. Unfortunately, they don’t have a league in the Sacramento region. The league that stood out to me was Golden Stick. Their leagues were out in Massachusetts and New York, but it was clear that GSWL is the NFL to Fast Plastic’s CFL.

Fast forward to December, and I found myself watching more wiffle ball videos – this time highlights of Golden Stick’s playoffs. Now, I’ve been known to watch basketball and wanna hit the hardwood, but it doesn’t even compare to how much watching wiffle ball highlights makes you feel like wanting to grab some plastic and head outside. Seeing as how I was knee deep in snow upon stepping outside, I thought I’d pop over to GSWL’s website and see if by some crazy chance they were expanding into CA. Amazingly enough, they are!

That’s right. Next summer, Golden Stick will be in Northern California! Teams are forming right now from Chico to Sacramento to San Francisco. Since this is actually going to become reality, I checked out the league further and was blown away by what I saw. This isn’t exactly the same wiffle ball game you played as a kid. We’re talking jerseys with professional logos and names and numbers. The website has standings and statistics that make my rec basketball league look like the local newspaper in the small town I grew up in. And the ultimate prize – an all-expense paid trip to Las Vegas for regional winners to compete for the National Championship.

If you haven’t done so yet, head over to Youtube and watch a video or two. Makes you wanna get out and hurl some 70 mph plastic at your buddy’s face. The best part is watching his knees buckle while the ball breaks right in over the plate. I’m ready to get out there and see if anyone can hit me. The league starts in June 2010. GSWL is expanding into other markets as well, so definitely check out the site to see if it’s coming to your area.

me links if you’re looking for more information…..

For information about the NorCal Region, e-mail….

Let's Go Oakland....clap, clap, clap clap clap END_OF_DOCUMENT_TOKEN_TO_BE_REPLACED
This entry was posted on Sunday, December 13th, 2009 at 6:20 pm and tagged with Baseball, fast plastic, Golden Stick, sacramento, Wiffle Ball and posted in Sports. You can follow any responses to this entry through the RSS 2.0 feed.
« RFP of the Day: Kenny Anderson
The Race Draft Revisited »