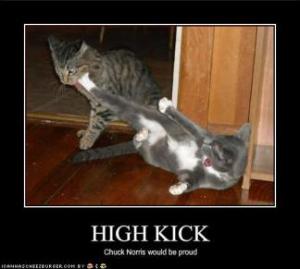 10 ) Chuck Norris recently had the idea to sell his urine as a canned beverage. We know this beverage as Red Bull.

8 ) Apple pays Chuck Norris 99 cents every time he listens to a song.

7 ) When the Boogeyman goes to sleep every night, he checks his closet for Chuck Norris.

6 ) Chuck Norris doesn’t bowl strikes, he just knocks one pin down and the other nine faint. 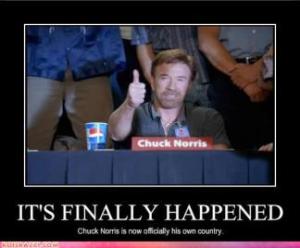 5 ) Chuck Norris is suing Myspace for taking the name of what he calls everything around you.

4 ) Chuck Norris can set ants on fire with a magnifying glass. At night.

2 ) Chuck Norris has the greatest Poker-Face of all time. He won the 1983 World Series of Poker, despite holding only a Joker, a Get out of Jail Free Monopoloy card, a 2 of clubs, 7 of spades and a green #4 card from the game UNO.

This entry was posted on Saturday, October 3rd, 2009 at 12:29 pm and tagged with Chuck Norris, funny, Jokes, top ten and posted in Comedy, Random. You can follow any responses to this entry through the RSS 2.0 feed.
« Coaches Gone Wild, Part IV : Charity Receives “Pearl of Wisdom”
Sometimes you have to play 163! »