I noticed something after tonight’s Kings-Wizards game and couldn’t wait to launch this rocket off into cyberspace. After the horn, Tyreke Evans grabbed Gilbert Arenas’ arm from behind, presumably to say good game bla bla blah. Well, ESPN cameras cut away to something else, and when they cut back to Evans, accomplished lip readers like myself saw him yelling “Yeah fuck you homeboy.” Since a mere second or two had elapsed, one can only assume this was directed at Arenas. Personally, I’ve seen nothing to suggest Tyreke Evans is at all anything short of a humble, class act. Therefore, I’m left with the impression that Gilbert was sour grapes after losing the game by getting stripped by the rookie on national television. Though perhaps it’s possible Tyreke was being the Byron Hout to Gilbert’s LeGarrette Blount – minus the right cross. Nonetheless, I’m curious to know what really transpired, so someone please fill me in. Gilbert, you’re a fellow blogger. Tell us what the deal is! 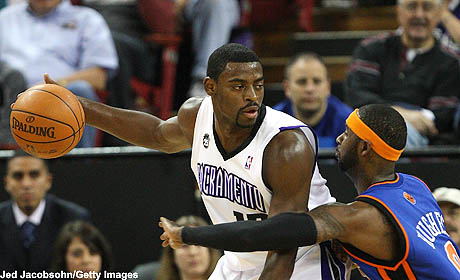 ESPN recently added tonight’s Washington Wizards – Sacramento Kings game to their schedule. It will be broadcast nationally at 7:30pm PST. This marks leading Rookie of the Year candidate Tyreke Evans’ national television debut. Basketball fans throughout the country will get their first glimpse at Evans’ professional career, something I’ve been watching every step of the way early in the season. The red carpet has pretty much been laid out by the national media over the last few weeks, and tonight, Evans will make his much anticipated debut. Tyreke didn’t take long to make his presence felt in Sacramento. After Kevin Martin was sidelined with a wrist injury, Evans has assumed control of the team and become the franchise player. Honestly, he’s one of the best rookies I’ve witnessed in the entire decade. Let’s take a look at what he’s done thus far….

To this point, Evans is averaging 20 pts, 5 reb, and 5 ast per game. You can find him in the top 10 in numerous statistical categories among NBA point guards. Although his status as a point guard can be debated, his impact on the court cannot. He’s the primary reason for the Kings’ surprising 10-13 start. He’s playing 35+ minutes per night, and his ability to get into the lane and attack the basket is borderline unparalleled. One of the bigger knocks on him coming into the season is his jump shot, but he has knocked it down better than was predicted. Opposing teams have often put their best perimeter defender on him, only to see him blow by them and get to the basket. He’s also impressed with his defensive ability. His 1.55 steals per game rank him 20th in the league, and 6th among point guards. It will be interesting to see him match up against Gilbert Arenas tonight, someone whom I would compare Evans’ game with. Tonight will be a huge night for Tyreke, as it will mark his national coming out party. His name has been floated around in awards discussions, not only for rookie of the year, but he’s also garnered consideration for an all-star berth, and even MVP attention. If he plays well tonight, expect him to remain atop the Rookie of the Year rankings at least through Christmas. If this is your first time seeing Tyreke Evans play in the NBA tonight, sit back and enjoy the show. The kid is well on his way to a phenomenal NBA career.

Raiders Sign Another Interception Machine… It Could Be Worse Though!

JP is turning in the yellow and blue for silver and black!

JP Losman is coming fresh off leading Las Vegas Locomotives to the UFL Championship, and is destined to battle with Gradkowski for the starting job, as he signed with the Oakland Raiders! I’m not sure he’ll play this week, but with Gradkowski injured that might be why he was brought in. Watch out Denver, we have someone slightly to mildly better than Jamarcus! I don’t think Losman will do much, but this all but reaffirms that Jamarcus will be cut at the end of the year. Raider Nation has been waiting all season for Al to give up on him, and this looks like it might be the last nail in Russell’s horrendous career, if you could call it that.  The organization finally had enough of Russell last week when he came into a 10-10 tie after Gradkowski was injured. He did his best to show he learned nothing from being benched. He got sacked his usual 50% of the time, and threw passes to the other team as much as he could with no receiver in sight. I think he threw it to Zack Miller, because he’s the only one he ever threw to accurately. I was glad he at least refrained from blaming the playmakers for not catching his balls 20 feet over their heads this week, which was his excuse when Bruce came in and won for them. Hopefully this will have to be the last rant I make on Jamarcus as he goes on his farewell tour… JP’s stats aren’t exciting, but one thing does stand out, his career QB rating is 10 points higher than Russell’s! I guess we’ll see how he does, but we all know it will be better than Russell.

Who would've thought this would be the last time he'd be #1 at anything! I guess, everyone but Al...