Raiders Were Screwed Either Way… 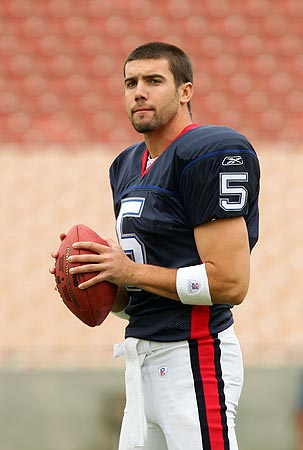 I found myself saddened by the Bills decision to cut Trent Edwards today. It’s strangely the second pro athlete my mom has met since I left NorCal, and I was more excited to hear about her encounter with Ricky Williams, but Trent Edwards wasn’t a terrible silver medal. Edwards happens to be my mom’s neighbor’s wife’s cousin, so she has seen him a few times here and there. Anyways, the reason for this post wasn’t to be sad about Edwards getting the axe in Buffalo, but more to be happy that the Raiders couldn’t have selected a solid quarterback out of that 2007 draft when they gave their fate to arguably the biggest draft bust in the history of busts selecting Jamarcus. It might have been one of the ugliest classes in decades, unless Kolb somehow grabs the job from Vick (don’t hold your breathe for that one) it was a horrible draft for QB’s. It’s always fun to see where the top QB’s for the first 100 picks of that magical 2007 draft are today.

I’ve said all I can say about this guy, but right now he’s probably pounding some sizznurup hoping the UFL will give him a call.

He’s now hanging out in Denver behind Tim Tebow(another over drafted QB) of all people. I guess if Orton got hurt, he might see the field, but if his resume isn’t bust material I don’t know your definition of a bust is.

Can’t call him a bust yet, but can’t call him much of a success when Vick has already supplanted him as the starter in Philly after 6 quarters against bad teams. I’m not a beliver yet, but I guess there’s a chance he could be good…

Who? Took me a minute to remember who he was too. Miami didn’t like him all that much, now he’s a third stringer in Washington, not exactly a successful 2nd round pick.

Another who? Is there an owl nearby or something?!? He is holding down the backup spot on Detroit right now, but when Stafford gets back on the field he’ll move down the depth chart.

Just got cut, so the way I see it, if Kolb sucks the Raiders didn’t make a terrible choice in drafting Jamarcus, there was simply nothing to work with out of this QB class, so we were doomed no matter who ended up coming to Oakland.

I'm a dude that just hit 30 years old. Pretty much like everything that is funny, insightful, and has to do with the Warriors, A's, and Raiders. END_OF_DOCUMENT_TOKEN_TO_BE_REPLACED
This entry was posted on Monday, September 27th, 2010 at 8:22 pm and tagged with 2007 draft, Brady Quinn, draft busts, football, jamarcus russell, NFL, sucks, terrible QB's, Trent Edwards, worst draft ever and posted in Sports. You can follow any responses to this entry through the RSS 2.0 feed.
« Vincent Jackson’s Value E-mail Thread
Mythbusters for Sports »

8 responses to “Raiders Were Screwed Either Way…”