Are the Twins the New Braves? 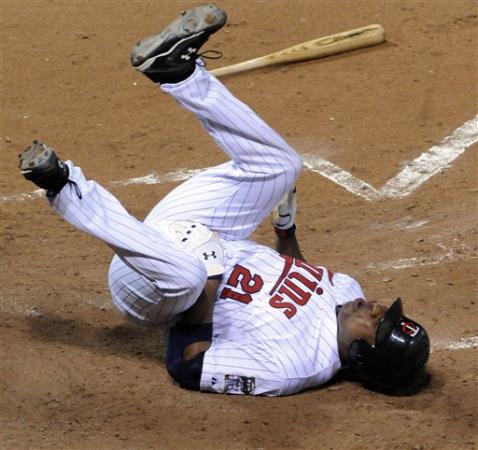 Chappy brought up a good point the other day. The Minnesota Twins are the new Atlanta Braves. The Braves gained notoriety for not just winning 14 division titles in 15 years, but only winning ONE World Series during their run of domination. The Twins aren’t quite on that level, but they are starting to put together quite a streak of postseason futility. Being an A’s fan, I can’t say I don’t know what it feels like, but with today’s ALDS series loss to the Yankees, that makes 5 LDS losses in the last 8 years. What’s worse is they only have TWO wins to their name during that stretch. This is their third consecutive time being swept in the LDS, including one at the hands of the Oakland Athletics in 2006. They seem to have their nucleus locked up for a few years to come, but will they ever taste postseason success? Much like the A’s, their defeats seem to come often at the hands of the Yankees. You can’t help but feel like they’re destined to reach the playoffs year after year, only to be tossed aside by whichever team draws them in the opening round. But hey, most can only hope for a taste of the postseason. I can appreciate the Twins’ low-budget success. But really, I can’t help but think they’re the Braves of this era.

Let's Go Oakland....clap, clap, clap clap clap END_OF_DOCUMENT_TOKEN_TO_BE_REPLACED
This entry was posted on Saturday, October 9th, 2010 at 10:12 pm and tagged with Baseball, minnesota twins, MLB, mlb playoffs and posted in Sports. You can follow any responses to this entry through the RSS 2.0 feed.
« AFC West Stronger Than Expected E-Mail Thread
Raiders Catch the White Unicorn »

6 responses to “Are the Twins the New Braves?”