This week’s lines are brought to you by the legend Kenny Powers!

I can’t quite get to .500 on the season, and By fell just below .500 for the year. It’s always funny to see the games that you weren’t worried about go completely wrong, and the ones that you questioned picking, coming through without a hitch. I guess it just shows you how good those damn odds makers are, and just how much parody there is in the NFL, but they can be beat, and that shouldn’t be an excuse! Even if I’m more indecisive than all these head coaches are with picking a starting QB, it doesn’t mean that I can’t pick a winner, right?!? Now that I’ve completely lost you, I’m going to try to make this week’s picks without bias, ie. I’m not going to pick teams that I want to win! Rule number two for the week; if you see both of us pick the same team in the same game immediately pick the opposite way. We are 0-2 in games we both picked the same team; hopefully the odds will even us out soon.

Like Vernon Davis, I fell flat on my face on the guarantee to win ’em all.  I finished a dismal 1-2-2 last week, but honestly, I thought I came out better than that.  Philly was up big, and Oakland had St. Louis at home.  Those two should have been a lock to cover, but I check the final scores, and both teams let me down.  So this week I’m stepping my game up, not only more focused on spotting the winning lines, but I’m picking a career high six games!  So I’m giving you the quantity for sure, and perhaps … the … quality?  I guess we’ll find out come Sunday.  On to the picks!

It was announced all over today that our new Warriors regime (Lacob and Gruber) would like a fresh start this training camp without Don Nelson holding the keys to their new investment. They can’t officially make moves for the team, but they made it clear to Cohan and Co. that they’d like Keith Smart at the helm to start this season. As By said, the Smart era is upon us! As much bashing as Nellie took over the last two seasons it’s hard to remember why they wanted him in the first place, but looking back he was easily my favorite Warriors coach of my lifetime, and for that I thank him for bringing me some joy in the postseason which is more than I can say about any of the other coaches they had.

Growing up people always wondered why I liked the Warriors. It was hard to justify, but in the late 80’s Nellie made me a huge fan throwing together the Run TMC package of Mullin, Hardaway, and Richmond. Sarunas Marcuilloneus is still my favorite international player of all time. From that moment on, I was going to be a Warriors fan for life, and going to their games every time I went to visit Grandma and Grandpa probably added to it as well. He retooled the dubs with Spreewell and Chris Webber after the Run TMC days were over. Nellie’s teams made the playoffs in four out of his seven years as the Warriors coach. Little did I know then that they wouldn’t make the playoffs for a loooong time after he left, because the beginning of the Cohan Era started in 1995.

His second stint with the Warriors was highlighted by his inability to get along with players, and that shouldn’t have come to a surprise to the fans, since he was behind selling Chris Webber away for a poo poo platter after just getting ROY honors. Alas, he did give us a magical season in 2007. It was probably one of the most exciting teams to watch in the league, unless you’re a big fan of defense for some reason. The year after they won the most games of anyone to miss the playoffs, so he still hadn’t lost the team yet, but that offseason he broke everyone up starting with Baron. Even in this day in age where we only remember what was said last, I still love the guy, even though he was the main catalyst behind breaking up two good teams. He gave me the best basketball for my team during my lifetime, and I’m grateful for that  no matter whatever other stuff happened. I wish him the best, and hope that the Smart Era isn’t like the Montgomery, Carlesimo, Musselman, and St. Jean Eras. It can’t be worse than them, and it looks like our new owners actually want to acquire talent that fits together. I’m cracking a Bud Light right now just for you Nellie!

Why Is Bob Geren Still Here? 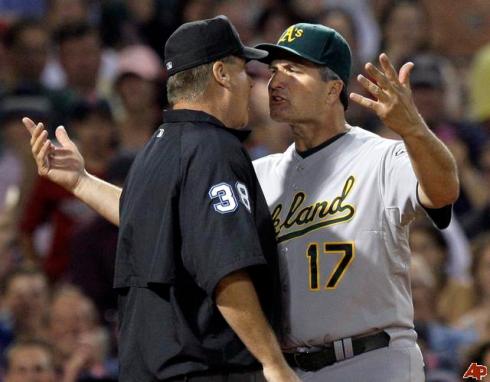 That’s a rhetorical question. Bob Geren is still here because he’s Billy Beane’s BFF. I just really wish the A’s would try to find a good manager instead of apathetically letting the GM’s buddy run the show. Today, the Oakland Athletics exercised the option on Bob Geren’s contract for 2011, meaning he’ll be back for another year at the helm. It’ll be his 5th year as manager and he has yet to top 76 wins. Granted, he’ll most likely top that this year, but the guy hasn’t even managed a .500 season in his tenure. He has a career record of 302-334. What club actively brings back a manager after four consecutive losing seasons? It’s not like they’re a struggling franchise like the Royals where a 70 win season could be considered a success. This is a team that had EIGHT STRAIGHT WINNING SEASONS, capped by an ALCS berth. Then the Geren era began, and it’s been all losing ever since. Sometimes I feel like Lou Wolf and the A’s ownership are recreating the classic film, Major League – I probably allude to that every time I write about the A’s – except Lou Brown would probably do a better job.

I think it’s time for the A’s to do what the other Oakland teams did and bring back an old coach that had success. The Warriors brought back Don Nelson and before you knew it were back in the playoffs. The Raiders brought back Art Shell and they only gave up 332 points – their lowest in a season to date since the Super Bowl season in 2002. They went 2-14 but that’s neither here nor there. It’s time to bring back Art Howe. Maybe Ken Macha will be available after the Brewers finish the season. Shoot, Don Wakamatsu, former A’s bench coach, is available. Oh

wait, we’re locked in on Geren for another sub-.500 year. I guess the A’s are just going to milk another revenue sharing season and let attendance dwindle even more so they can continue to build their case to leave Oakland. I’m fed up with this charade. The fanbase is there, but this ownership regime continues to alienate. I’m the biggest A’s fan I know, but it’s hard to support a group that simply can’t compete. Sure, there are some great young players, and the future is bright, yada yada yada. But Get Carter had a great cast and that doesn’t make it a good movie. Anyway, I’ll sit through one more year. It’s not like they signed Geren to an extension; they just exercised his option. That’s same thing as someone putting on Get Carter, so you sit through it, as opposed to going to the theater and buying a ticket. I’ll tell you this much though, if the A’s buy a ticket to Get Geren next year, I’m done. But by then they’ll probably have a deal in place to move somewhere so I won’t really care…..

One on One in Alcatraz

It’s no secret, during any sports off season I wish that sport was starting it’s season already. Basketball is no different, and with the World Championships over there’s not a lot of entertaining hoops going on, so instead of heading into the past like MCeezy did, I’ll have to make due with amateur’s playing in a one on one tourney at Alcatraz.  The venue makes it more entertaining than it actually might be!

2 Comments   |  tags: Alcatraz, basketball, one on one tournament | posted in Sports