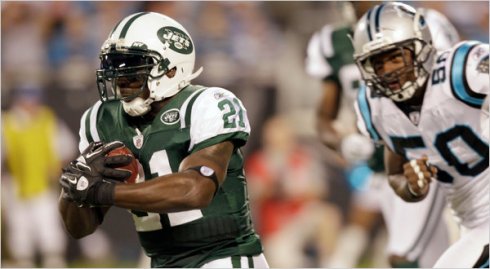 The life of an elite NFL feature back is getting shorter and shorter. I don’t mean that they’re dying at a young age, just that a guy can be the man on his team for just a handful of years, and that lifeline seems to be getting shorter. It seems like just a few decades ago, it’d be the same handful of guys racking up 1,000 yard season for years on end. Now a guy is likely to have one or two, and then be replaced by the next young, healthy back. It’s evident this season when you watch guys like Ladanian Tomlinson and Marion Barber no longer getting the bulk of their teams’ carries. It seems like just yesterday guys like these were dominant on the field, and now are relegated to sharing duties with younger guys. In other sports, you could look at league leaders from five years ago and the majority of those guys are still putting up numbers. I took the top ten rushers from 2006, and it looks like all ten of those guys would be lucky to total 1,000 yards combined this year…

TIKI BARBER, NYG. 1860 yds: Barber totaled 6 1000 yd seasons over a span of 7 years, and though you could argue he retired still in his prime, it was clear that Barber’s days were numbered, which probably prompted his retirement somewhat. Barber’s last season was 2006, but he knew Brandon Jacobs was the back of the team’s future.