I bought this putter while I worked at Pebble. There were only 400 made, and to this day I'm pissed that I sold it away just to double my money. I wish I listened to my buddy Roy, and if you reading this, you were right to keep yours!

The caddies at the courses at Pebble Beach Resorts are probably some of the luckiest guys around. You wouldn’t you know that listening to them complain more than a feminist group. Sure, it’s a physically demanding job carrying two bags for 18 holes, but there aren’t many better places to take that walk, and sometimes they get blamed for making the wrong call on a shot, but in the end they get solid pay even before they get their tip. When I was there it was $65 a bag, and usually they’d carry two for a guaranteed $130. They’d get a minimum of a $50 tip, but more times than not, it was between $100-$200. Some of them have returning clients that must either be a nice person to walk with, or they are a baller that is going to want that caddy to hook them up with some things non-golf related.

Sometimes the caddies hook the guys up with, ummm, escort services, yes even the married ones. (Side note, a lot of guys asked me about escort services, and I would either give them the number to call or tell them to ask one of the caddies.) Another reason is sometimes certain caddies are good at getting their players certain drugs, no need to elaborate which ones, it’s irrelevant. I’ve heard some guys actually request a certain caddy, because they liked them the last time, that’s an unimaginable crazy scenario, I know. Some also take a caddy based on their reputation, and that is basically their seniority. 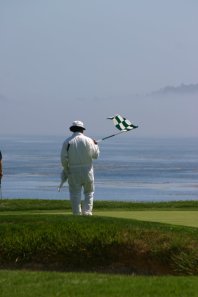 They get to meet all kinds of cool people that are just happy to be there whether they are famous or on a company sponsored trip. One of my good buddies caddied for the CEO of Jack Daniels, he ended up with a nice tip ($400-$500), and delivery a week later that was a box of JD Single Barrel bottles, flasks, cocktail glasses, and other JD swag. I gladly helped him take down some of the premium whiskey! It seems to happen to each caddy every couple months, which is why I think they have it pretty easy.

Seniority reigns supreme in the caddy shack, and it’s weird that the oldest guys are the grumpiest. It was always funny to hear them talk about some of their players, and how they didn’t deserve to play on the course, because they were so bad at golf. It might be half true, but REALLY!?! They just paid $450 for the round each, probably had to stay a night at the resort just to get the tee time ($400-$1,000), and throw in $65 more for a caddy that doesn’t even like them, and they don’t deserve to be there?!? I’ll be the first to admit, there were some spoiled rich bastards that came in, but knowing how much we charge for everything, you just have to suck it up, and be nice. Usually you’ll even get a tip out of it, unless your helping Charles Schwab (the cheapest man in America who never tips with a $60 Million dollar house next to the 18th tee at Pebble).

Another thing about the caddies I found entertaining is when the big tourneys come into town. I got to chill by the driving range and give them range balls. I’d often listen in on them betting on their players within their pairings. They would be betting on everything! They would bet on shots their players took on the range! I remember one time Luke Donald’s caddy was talking to another caddy for the player next to him (can’t remember who), but they were betting on whether or not Luke could fade his shot around a range pole, because that was what he was working on. They were betting $5 a shot on the stupid range warm up shots! I know for a fact that some guys lost all their money they made for the day to another caddy, always funny stuff. This is one reason I’ve always believed Stevie Williams must be more rich than we even think. I bet Tiger makes 9 out of the 10 shots Stevie could bet on!

I'm a dude that just hit 30 years old. Pretty much like everything that is funny, insightful, and has to do with the Warriors, A's, and Raiders. END_OF_DOCUMENT_TOKEN_TO_BE_REPLACED
This entry was posted on Friday, June 11th, 2010 at 6:27 pm and tagged with AT&T National Pro Am, Caddies, caddy, expensive, golf, Luke Donald, Pebble Beach, PGA, US Open and posted in Pebble Beach Stories, Random, Sports. You can follow any responses to this entry through the RSS 2.0 feed.
« Best of 3
Funny Signs From China »