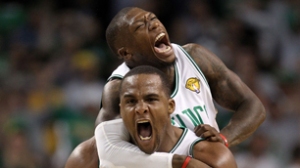 With all the star-power featured in the 2010 NBA Finals, it’s hard to imagine that the championship will be decided by Andrew Bynum and the Celtic’s bench, mainly the “Big Baby” himself, Glen Davis.  Game 4 was ugly for the first 36 minutes, but once the final period began, all mayhem broke loose.  The Celtics bench unleashed hell on the Lakers, and credit Doc Rivers for leaving them in.  One thing I admire about the Celtics, is that they completely embody the word “team.”  Three future HOF’s were at the scorer’s table ready to check in, only to be called back when the bench started rolling.  Neither of the three had a bit of a problem with it.

None of us expect Davis to play out of his mind like this again this series, especially after his performance during the post-game press conference along with Nate “Dog” Robinson (I think LA might not appreciate it, and will have som

ething to say about it) but it’s safe to assume he will contribute.  Especially if Bynum is hobbled, again.  Sorry Lakers fans, but Bynum is about as reliable as Lindsay Lohan’s ability to stay off the booze.  What’s scary for LA, is the fact that if you look back at every game this series, Allen, Garnett and Pierce have all failed to string together good games at the same time.  Yet Boston has somehow pulled off two wins.  Including a win in LA in which they were out shot in free-throws some 40-25 (Boston’s final 6-7 when LA were forced to foul).  You have to be concerned that they’ll finally get it going, along with an energized bench, it’s going to be tough LA.

other side, if you’re Boston, you have to be concerned that the three days between Games 4 and 5 will be enough to heal Bynum’s knee.  If Bynum can be even halfway productive for the remainder of the series, Boston’s chances of winning decreases.  Another cause for concern if you’re Boston, Derek Fisher.  Fisher’s foul trouble kept him sidelined for most of Game 4, and LA clearly missed his presence down the stretch.  What Boston appreciates is when Kobe Bryant gets into that mind state that he has to win it on his own, and they stop going to Gasol.  Pau Gasol dominates the post when they go to him, and for the life of me, I can’t understand why LA doesn’t run their offense through him more?  He is a willing passer, and he puts the defense at a retreating position every time.  And of course Kobe Bryant.  Kobe needs to trust his teammates during the course of the game, then take over late ala “The Closer.”  When Kobe plays within the rhythm of the game, he is unstoppable.

Oh, and the Lakers bench has to show up.

With all that being said, I must say the officials have had a hand in all the wins, and these NBA Finals have been heavily influenced by bad calls.  I’m not one to draw up conspiracy theories, but a Boston/LA rivalry renewed does look good going seven.  I’m sure that’s crossed the minds of the higher-ups at the NBA corporation.  Just saying.