Who knows the NBA Rookie of the Year candidates better than Doin Work? Name one blog with more content about the Kings and Warriors. We’ve been gushing about Tyreke Evans and Stephen Curry all season long, so now that it’s down to a two-man race for the award, who better to weigh in on the subject than us? We’re breaking down the analysis into three categories which we feel make up the criteria for the award. The first is Stats – no explanation needed. The second is Team Performance / Influence – how well has the team played and how much is a result of the player’s impact? The third is Future Outlook – meaning whose resume is going to look better 20 years from now. Most voters will probably tell you that has nothing to do with the Rookie of the Year award, but that’s not true. Sportswriters love being right. They want to vote for the guy who’s going to have a couple MVP awards in his career so they can say, “I voted for him.” You think any writers out there are watching any Wizards’ games bragging that they voted for Mike Miller for ROY? Come take a trip with us up and down I-80 to see if the trophy is going to end up in Oakland or Sacramento this year….

Tyreke Evans (MCeezy)- The numbers don’t always tell the whole story, but I think in this case they do. Evans is averaging more than 20 pts, 5 reb, and 5 ast for the season. This fact

has been well documented, including here, but in case you missed it, the only other rookies to do that are Lebron James, Michael Jordan, and Oscar Robertson. He’s in the top 20 in the league in Points, Assists, Steals, Minutes, and triple doubles. Sure, he has one, but no one who’s not named Lebron James has more. In fact, Evans’ last outing he came up one rebound shy of his second triple double. Curry’s got a slight edge in 3pt and FT%, as well as steals, but Evans’ overall numbers definitely trump those of Curry.

Stephen Curry (Chappy)- I have to concede that Tyreke’s numbers are superior to Curry’s, but in Curry’s defense, his first two months under Nellie were inconsistent to say the least. There were games when he’d play 35-40 minutes, and the next night he’d play 10-15. I’m not sure if it was Ellis saying that they couldn’t play together, but either way Nellie didn’t seem to trust him that much. Since the Warriors were struck furiously by the injury bug, Curry’s minutes went up and so did his production. Since December, he’s had close to the same numbers as Reke averging 20 pts, 4 rebs, 4 assists, and nearly 2 steals. He’s easily been the most improved rookie over the season.

Tyreke Evans – The Kings have overachieved this year, and you don’t have to look any further than Tyreke to see the reason why. They were 1-4 before Kevin Martin went down with a broken wrist. After that, they rattled off 5 straight wins and Tyreke Evans became the leader of the team. He hasn’t looked back since. Sacramento won just 17 games last year, but they’ve already notched their 23rd win of the season, and there’s still a month to play. Tyreke has been so good, he made the Kings’ best player expendable. It’s his team now, and they’re clearly on the rise. 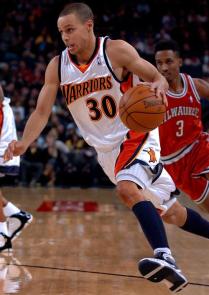 Feeding off Mceezy’s comments, Curry is slowly replacing Ellis in the Warriors backcourt as the best guard on the team. His basketball IQ is superior to anyone on the Warriors, and that might even include Nellie when he’s had a few too many beverages tailgating before games. The Warriors were supposed to see what the future held this year with a roster full of young guys, unfortunately endless injuries will have us wondering the same thing when next year begins. Only being able to muster 18 wins so far can’t be blamed on Curry, especially when they had a hand full of games with only one guy over 6’9” available to play. Curry has shown leadership skills. He runs the offense, and gets creative with his passes, ball fakes, and finger rolls around the hoop. He seems like everything you’d want in a teammate and franchise player.

Tyreke Evans- There are few doubts about Tyreke Evans’ star potential. He can pretty much get to the basket at will, and opposing defenses have been centering their gameplan around him since December. Yet and still, Evans has continued to produce. He’s impressed on a national stage, including taking home MVP honors for the Rookie-Sophomore Challenge. He’s also a soft-spoken, mild-mannered personality off the court. He may have been an alleged accessory to murder at one time, but he figures to be a model citizen for David Stern to stand behind for years to come. On the court it’s a different story. Evans is already emerging as one of the great clutch players, and he has fun doing it. Tyreke is the kind of superstar the NBA can stand behind, and they love those guys. Don’t be surprised if Evans is a perennial all-star for the remainder of his career. He’s a consistent jump shot away from becoming a top 5 player in the league. 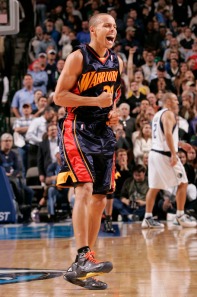 Stephen Curry- If his dad taught us anything, it would be, if you have a sweet and quick releasing jumper you can last in this league. Curry’s percentages speak for themselves (42% 3PT, 46% FG, 88% FT). The best thing about those percentages is that isn’t even the best part about him. He effortlessly gets where he wants on the floor, and depending on what the defense does when he gets there he makes the right choice more often than not with either a pass or that sweet jumper of his. If you didn’t catch him at Davidson, then you might not know how clutch he is. Just youtube it, I won’t explain… He has brought the Warriors back with his three pointers a few times this year, although he hasn’t hit a game winner, he’s tied a few and sent them into OT. I’d never question letting him have the last shot in a game. Curry understands what it takes to run a team, and could be as good as guys like Nash and Kidd if his career lasts as long as daddy Del’s 16 year career. The only reason I compare him to Nash and Kidd is because he never leaves his feet and is never caught in the air without a purpose. He will be a superstar and even if it ends up not being with the Warriors I’ll root for him.

Let's Go Oakland....clap, clap, clap clap clap END_OF_DOCUMENT_TOKEN_TO_BE_REPLACED
This entry was posted on Tuesday, March 16th, 2010 at 9:21 pm and tagged with 2009-10, award, basketball, debate, golden state warriors, great rookies, NBA, predictions, rookie of the year, ROY, sacramento kings, Stephen Curry, tyreke evans and posted in Sports. You can follow any responses to this entry through the RSS 2.0 feed.
« What March Madness Could Have Looked Like
Doin a Video Game Review: MLB 10 The Show »

11 responses to “Doin Debates: Tyreke vs. Curry for ROY”