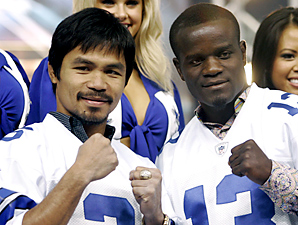 I won’t be one of the people purchasing the Pacquiao vs. Clottey on PPV this Saturday the 13th, mainly due to the ridiculous price of the event, and paying for a fight that could be over about as fast as it started isn’t appealing either. It should no doubt be Manny and Floyd squaring off, but unfortunately that’s not the case. I probably won’t buy another fight until that match up happens, but who knows if it will ever happen. What if one of them loses!?! Would that make it impossible for the match up to happen!?! I’m sure I’ll catch Pacquiao and Clottey on HBO when that’s released. I’ve always liked boxing since one of my old roommates got me into it. His grandpa was none other than Denny Moyer. These days the sport isn’t what it used to be. I wish MMA never came around. I think that took a lot of true warriors out of the boxing pool. If Manny loses this fight it, would be as big of an upset as Buster Douglass over Iron Mike. I wouldn’t hold my breath though. Here’s my list of reasons why Manny will destroy Clottey this Saturday. 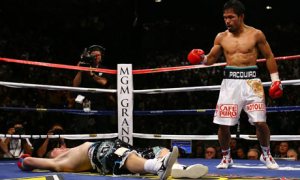 This is how most of his opponents end up... I don't see it being any different this weekend...

I’m probably beating a dead horse with this post, since most don’t really belive Clottey has a shot, but I’ve never really written anything about boxing since we’ve had the blog going, so I thought I’d see how it went… All in all it’s pretty improbable to see any kind of upset. Manny is flat out the better fighter, and in reality, is the best fighter on the planet right now. I guess we can’t be 100% sure of that until he and Mayweather stop squabbling about blood testing, and get in the ring, but if Mosely beats Mayweather on May 1st we may never get the chance to see it.

I'm a dude that just hit 30 years old. Pretty much like everything that is funny, insightful, and has to do with the Warriors, A's, and Raiders. END_OF_DOCUMENT_TOKEN_TO_BE_REPLACED
This entry was posted on Monday, March 8th, 2010 at 5:04 pm and tagged with Boxing, fight, Joshua Clottey, Manny Pacquiao, PPV, preview, reasons pacquiao will win, Saturday March 13th and posted in Sports. You can follow any responses to this entry through the RSS 2.0 feed.
« Rodney Rogers And The Greatest 9 Seconds Ever
Doin Work Public Service Announcement »

5 responses to “Pac-Man’s Fight To Lose!”