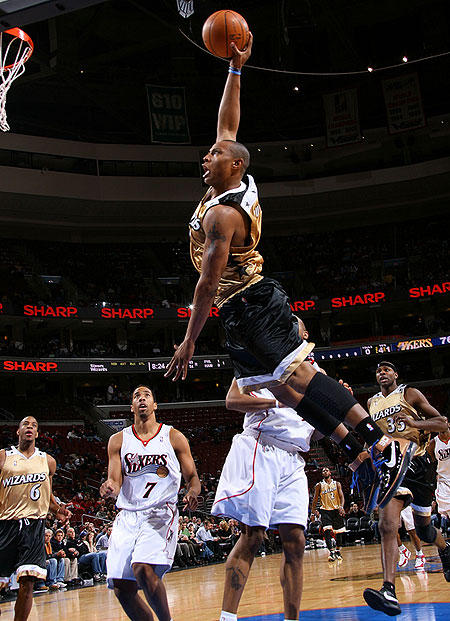 Playing host to the All-Star game in the city he owns, Mark Cuban, tried his hand in the celebrity game last night. He didn’t look to good on the court as the super slow white guy, but today he showed why he’s pretty good off the court in the front office. Early today it was reported that the Mavs will be sending two actual players Josh Howard and Drew Gooden, and two contracts Quinton Ross and James Singleton to Washington for Caron Butler, Deshawn Stevenson, and Brandan Haywood. We all knew the Wizards would do something, and it looks like they made their salary dumping choice. My first thought was, damn this is going to hurt Caron’s fantasy value, but then turned optimistic since he will be with Kidd in a faster paced offense putting up better numbers than Josh Smith did in the same role. Maybe going to a winning team will also inspire him to play a little better than he has so far this year.

I really like the move for Dallas. They get better at two positions, and Haywood is having a great year. I guess they didn’t want to do the Josh Howard for Caron straight up, so Washington threw Haywood in the mix and Cuban pulled the trigger. Josh Howard seems to regress more than improve, so Caron will be a huge upgrade. Haywood is one of the best defensive centers in the league this year, so I see him toughening up this soft Mavs team. Their main criticism over the years is being soft, and now with the addition of  the three mentioned players it will also give them some attitude, which might actually make a few teams kind of scared of them come playoff time. I wouldn’t put them up there with the Lakers in the west, but it sure improves their chances!

I'm a dude that just hit 30 years old. Pretty much like everything that is funny, insightful, and has to do with the Warriors, A's, and Raiders. END_OF_DOCUMENT_TOKEN_TO_BE_REPLACED
This entry was posted on Saturday, February 13th, 2010 at 7:24 pm and tagged with bad, big deal, Brendan Haywood, Caron Butler, contender, dallas mavericks, Drew Gooden, good, James Singleton, Josh Howard, Mark Cuban, Quinton Ross, trade, Washington Wizards and posted in Sports. You can follow any responses to this entry through the RSS 2.0 feed.
« Dar the D-League Dunker
Kobe and Cook Wish You A Happy Valentine’s Day! »

2 responses to “Cuban is Doin Work”