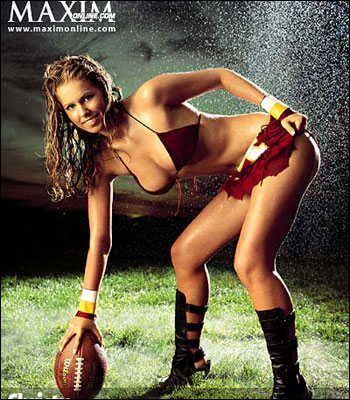 Well, I took a week off, but I’m back! I’m actually pretty surprised that I have done my picks for all but one week. Anyways in week 11, I went 4-3 which brought me back to .500 (31-31-1) on the year. As I was scanning through the upcoming games I realized that I liked a lot of road teams to win, so this week is my road LOCKS of the week! The lovely lady pictured above is a former Redskins cheerleader turned wife to a Redskin named Chris Cooley. Yes, the guy who let his dong flop out for everyone to see on his blog (that’s his wife, Christy). As usual the home teams are in bold, or in this case listed 2nd…

I actually think KC can hang in there with the Broncos, but that all depends on which Denver team shows up. Is it going to be the physical one that pushed teams around on the line of scrimmage for seven wins or will it be the team that got pushed around in four losses? I think having the extra few days off, and annihilating the Giants, should give them at least a little more confidence going into this showdown. If KC has any shot, it will be because of Jamaal Charles is running the ball effectively. The Broncos should win this game convincingly, if they truly are a contender.

This game features two teams that have lived to win in the 4th quarter. Vince and Peyton have been the definition of clutch these past six weeks. Only one team can win this week though, and you can bet it will be close. It’s ridiculous that the spread is this high even if the Colts are at home. The Colts haven’t beat the spread in three straight weeks, and this week doesn’t seem much different to me. The Titans are possibly the hottest team in the league, and the college option play with Vince and Johnson seems to have every analyst drooling worse than Peter Griffen’s co-worker at the toy factory. They have been playing some inspired and fun to watch football, so we’ll see how it plays out! I think this Titans squad has more talent to end the Colts winning streak than the Texans did.

I’m not sold on the Eagles, and usually don’t bet on them because they are so up and down. This week however, they are playing against a very banged up Atlanta team missing their glue on offense. Having Turner and Ryan sidelined makes this all that much easier to pick Philly. It will be interesting to see how the crowd reacts to Vick, but honestly, I don’t really care if they boo or cheer. If he was actually doing something in the offense, I could see a reason to make a big deal about it, but he’s not, so get over it MEDIA! It will just be a side note to the game. Desean Jackson will be out, but thankfully for the Eagles, they have plenty of other weapons to use in his absence.

Zorn knows the end is near, looks like he's even tearing up!

The Miller Lite Can’t Make This Line High Enough Award, goes to, every opponent that the Skins play from here on out. As we proclaimed yesterday on Doin Work, Drew Brees is the front runner for MVP this season. Hardly a shock to many, but we had to debate it anyways! I don’t really foresee any possible way for the Redskins to keep this one close. The Saints are looking to clinch the NFC South with this victory, so it should give them enough incentive to NOT overlook this game even on a short week! After making Brady look like an average QB, just think what they will do to Campbell and this ugly offense.

Yes, I finally found a game I can take the points for the lambs. Actually, I’m not overly confident on this one, but since I have to stick with the road team theme, it’s very possible for them to cover. The Rams are a terrible team that might not win again for the rest of the year, but the Bears aren’t much better lately as they’ve completely abandoned the run, and have a defense that is a former shell of the dominant unit that it used to be. The loss of Lance Briggs won’t be helping them much. They’ve been giving up tons of points. The Rams have one bright spot, and that is Steven Jackson. He’s currently ranked 2nd in the league in rushing yards, despite the team playing from behind in most cases. It’s going to be tough for Chicago to compete if they don’t start giving Forte the ball some more! I know he hasn’t done much this year, but giving him only eight carries last week is ridiculous!

Rivers was in our MVP talks, mainly because the Chargers could be the hottest team in the league, but alas, he was denied from the top 5. This San Diego team is one that nobody wants to face right now, especially a team as bad as the Browns! LT is finally playing well, maybe it’s because of his kid he just had. He didn’t want his newborn to think that he was the reason for his decline into running back irrelevance. He’s been scoring like he used to lately as opposing teams forget to protect against the run in this pass happy offense. Their D has been stepping it up too, causing turnovers, and getting pressure on QB’s. They look like their normal December selves. It’s only a question now of when will Norv mess this up!

I'm a dude that just hit 30 years old. Pretty much like everything that is funny, insightful, and has to do with the Warriors, A's, and Raiders. END_OF_DOCUMENT_TOKEN_TO_BE_REPLACED
This entry was posted on Thursday, December 3rd, 2009 at 1:40 pm and tagged with Atlanta Falcons, chicago bears, Cleveland Browns, Denver Broncos, football, Indianapolis Colts, kansas city chiefs, match up, michael vick, New Orleans Saints, NFL, philadelphia eagles, predictions, preview, San Diego Chargers, St. Louis Rams, Tennessee Titans, vs., Washington Redskins, week 13 and posted in Sports. You can follow any responses to this entry through the RSS 2.0 feed.
« Beggars Can’t Be Choosers
Great Moments in Nets History »