Since I was unable to make my gambling picks for the weekend being away for Turkey Day, I’ll have to settle with putting out my Power Rankings through Week 12. Without having the advantage of seeing how the big MNF matchup plays out I’ll just assume that the Saints win. Since everybody might be in the mood to slim down, after all that turkey I’m only doing the top 16 teams. No need to write about all the other teams that would just rather have an autograph from the guys lining up across from them.

It’s tough to not pick the Saints, but I think the resilience of this Colts team puts them over the top. They’ve now won five straight trailing going into the 4th quarter. If you aren’t convinced by that, they have won an amazing  19 in a row, and is the most behind the Patriots 21 straight.

Drew Brees blah blah blah, he’s amazing blah blah blah. We’ve all heard it. The impressive part of this team is that they are the 5th ranked rushing team, and it’s not all because teams are playing the pass, it’s because they are actually very good at running the football. People always say how the Vikings are so balanced, this team is just as balanced as them!

Unfortunately I was completely wrong about Favre signing with the Vikings. I guess the season isn’t over yet, so there’s still hope he could suck it up still, but I’m not holding my breathe. The Silver Fox, as Jared Allen calls Favre, looks to keep it rolling all the way to a first round bye.

Yes, Brady is as flaming as ever, but damn it I respect him… He’s got a better rhythm with his receivers than Bostonian sports fans have with being completely annoying. Their young defense has been a lot better recently, and they will need them to keep up the good play when it matters. Should be a good one Monday Night, and they will be tested every play with the Saints! 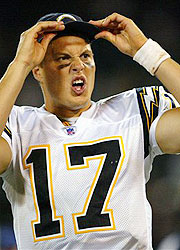 Who would’ve thought the Chargers would be this good? Not me, and not most of their fans until recently. I thought they were the best in the AFC West, but not the kind of team that could win six straight. Somehow Norv has this team rolling, and they still don’t run that often, but it doesn’t seem to matter with Rivers throwing the ball 40 times a game. They might be the hottest team in the league.

They didn’t dominate Cleveland like I thought they would, but at least they won which is better than they could say for playing against Oakland. The Cardiac Cats have proven they can come from behind, they can win ugly, and they play surprisingly good defense. They look to be a lock for the division title with the Steelers loss.

I don’t know why, but I just don’t think they as good worthy of their record. Of course there’s always a little extra drama with them, and Romo feels about as reliable as betting on or against the Raiders each week. I hope Dallas stumbles along the way, it always makes it more fun when they go into panic mode!

I can’t say I’ve been a big supporter or had any confidence in them against the spread this year, but they DO pull out wins, and look as explosive as ever with another new gadget in Beanie Wells. Even though they lost to the Titans they are still the division leaders, and should wrap up the west sooner than later. As long as they get old man Warner back in there, and Leinart doesn’t have to face Vince Young anymore, they will be fine.

Mcnabb has won two close ones in a row! Maybe we can put to rest those talks of him being the worst closer in Philly and slide him to the #2 slot behind Lidge. They’ve had tons of injuries, but I think they’ll be able to pull through when everybody gets healthy. Let’s just hope for their sake that DeSean isn’t out for long after his concussion he suffered today.

Rodgers IS having an amazing season. If it weren’t for him, their defense would probably outscore their offense! If they didn’t have to play Minnesota twice, they could probably be 9-2. Even missing key guys in their D they destroyed Detroit on Thanksgiving. They finally look like what everyone expected when the season opened, a playoff team.

They had a nice bounce back game against the Giants, but once again they will have to prove themselves after those four straight bad weeks. If they can somehow beat Indy in week 14, I’ll buy them as “for real” again. At the moment I don’t see them winning a wild card spot.

They’ve been up and down as all title defenders usually are. I think Polamalu was a bigger loss than Big Ben. I’ve always been a big Dixon fan, so I was glad to see him get a chance to showcase his abilities in the NFL. Baltimore barely beat them tonight, and with a third string QB starting and Troy out this should have been much more lopsided, so even though the Ravens won the Steelers are still the better team.

I don’t really think the Ravens D is all that great anymore. Thankfully they have Ray Rice to help Flacco put up some points, which haven’t been as plentiful as they once were. It was a big win for them tonight, but I don’t see that translating into a wild card berth…

With Matt Ryan hurt, I’m not sure this team is really going to go anywhere. Even if they get back Turner, I still don’t see them turning it around. It’s been a disappointing season for them, and I don’t expect to see them in the playoffs.

I actually think the Titans are better than the two above teams, but since they are under .500 it’s hard for me to justify putting them at 13. Vince has made me a believer, and also may have cemented himself with Mario Williams as the best players from that 2006 draft.

They haven’t missed a beat since losing Ronnie Brown, and I for one thought they would. The Wildcat has been as effective as ever with Rickey looking like the dominant back we remember from his prime! I like this team, because they show up every week whether they have a good chance to win or not.

I'm a dude that just hit 30 years old. Pretty much like everything that is funny, insightful, and has to do with the Warriors, A's, and Raiders. END_OF_DOCUMENT_TOKEN_TO_BE_REPLACED
This entry was posted on Monday, November 30th, 2009 at 12:34 am and tagged with arizona cardinals, Atlanta Falcons, Baltimore Ravens, Cincinnati Bengals, Dallas Cowboys, Denver Broncos, football, Green Bay Packers, Indianapolis Colts, Miami Dolphins, Minnesota Vikings, New England Patriots, New Orleans Saints, NFL, philadelphia eagles, Pittsburgh Steelers, power rankings, San Diego Chargers, Tennessee Titans, week 13 and posted in Sports. You can follow any responses to this entry through the RSS 2.0 feed.
« More Than a Hobby
The Tiger Saga… »