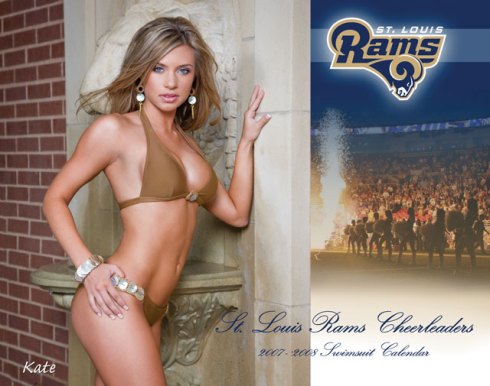 Kate is my favorite Rams Cheerleader

Hmm, maybe I’m not cut out to do this anymore for our blog. It seems like my record is going downhill faster than Southern California is getting pushed out of the playoffs. After going 2-4 last week, I’m under .500 for the first time on the season at 14-16. I missed three games by 2 or less points last week which really hurt, and made me realize once again that Vegas is way too good at making these lines! I guess it always goes in waves with football, so good news is I’m due for a winning weekend after two miserable ones. Anyways, here are my week 7 picks, and as always the home teams are in bold.

Hmmm, REAL tough one here! I think I’d give early MVP Peyton after a bye week 21 points over the Rams. I don’t think the Colts will overlook the Rams, the way the formerly undefeated Eagles overlooked the Raiders last weekend. It’s nearly impossible for teams to compete with the Colts when they have two weeks to prepare, so this should be a massacre. I doubt this game will be worth watching, but it’ll sure be worth betting on! If the Rams weren’t close to the league lead in penalties, I might give them a small shot to cover, but as of now I’m putting this one down as my lock of the week. On a side note, if you’re wondering why there’s a beautiful lady at the top the last two weeks, I’ve run out of interesting pictures of chalk lines, so I’ll be picking a hot cheerleader/fan of the losing team in my favorite pick of the week. So in case you were looking for something positive about Rams, at least there’s Kate…

I'd really like to see Cribbs on a good team.

I won’t make the same mistake twice of underestimating the Green Bay offense against a crappy team, and the Browns are just that. Last weekend made me realize that the Packers are at least organized enough to destroy the lower class of the league. This has the same set up as last weeks Lions matchup, and unless the Browns get a few kickoff returns from Cribbs they might not even get on the scoreboard. If I were Cleveland, I’d lock Joshua up since he seems to be the only thing right about the Browns these days. Anyways, I think Aaron Rodgers will keep fantasy owners, Green Bay fans, and gamblers happy with a big game similar to last week. This unfortunately is another unwatchable game on the weekend slate, and it looks like were already going to go three for three on the snore-a-meter with my next pick.

Brady finally put up those video game numbers that we’ve been waiting all season for.

It’s pretty obvious he wasn’t missing those deep routes with Randy this weekend, so I look for that connection to finally start getting some consistency that we once saw. The only thing that makes me hesitate picking the Pats in this one is that last years game in London, the field was a total mess, and produced a very low scoring snoozefest. I haven’t really read up on whether or not they’ve made adjustments to the field to handle this game, but you have to figure it’s at least improved. With Tampa giving up as many points as the other team wants to score, it’s impossible not to pick the Pats here. The Bucs are about as well rounded as Brendan Fraser in the beginning of Encino man. If it wasn’t in London, this might very well be blacked out.

I guess I jumped on the San Francisco bandwagon sometime early this year, and can’t seem to get off. They’re 4-1 vs. the spread, so you have to take the points when they’re given to you. The bye week came at a perfect time for them as they came off a loss that they really didn’t show up for. I look for them to bounce back in the same way Atlanta did against them after their bye week. I’m sure Singletary had them working out extra hard on their so called break. It’s also the first time we’ll see Crabtree on the field. Whether he makes a difference or is even on the field much remains to be seen, but they did open up a roster spot for him this week. Either way it’s just nice knowing that Hammer is on his side, and is ready to help show him the path to blowing boatloads of cash quick! I’m not quite sure I understand the Texans this year. They lose to Jacksonville and Arizona, but beat Cincy and NY Jets. They are about as up and down my picks this season, and only play well every other week, I like this as their off week, and losing to the 49ers outright.

Ah, and now to my Raiders. What a win last weekend! I really didn’t see it coming. I guess I want to thank the media and Giants players for getting those wall posting comments up in the Raiders locker room. It was a great defensive effort, and we finally see the reason that they made the trade for Seymour. Although they are more successful against teams that pass like the Chargers and Eagles, but struggle against balanced teams like the Giants and Broncos. Even with NY having a fairly balaced attack with a very good running game, the Raiders did beat them last year, which makes me believe that they can do the same this year or at least keep it close at home. Even though JaMarcus didn’t give me any added confidence in the offense last weekend, they did prove that they can convert a few third downs to at least give their defense a solid rest. I have a feeling they will bring the pressure once again against a shaky Sanchez. Did you see him on the sideline last weekend? I thought he was going to cry. If he’s closing in on the crying point, the New York media is going to tear him up. Hopefully it won’t come to that for him. Anyways, I’m sure Raiders fans will make him feel right at home after he throws his first pick.

HOTlanta has been impressive this year, and I feel are being slightly under rated by the line makers this weekend by giving Dallas more than a FG for their home field advantage. The Falcons only subpar performance of the season was against the Patriots, and since that stumble they’ve been rolling. Their defense is better than I thought it would be this year, and is carrying them nearly as much as their highly touted offense. I see them putting up some big numbers against an over rated Dallas team. Wade Phillips will sink this ship sooner rather than later, so brace yourself for a possible losing season in Dallas. I think having Wade as the coach automatically discounts whatever benefits that a bye week has for a team. I mean they barely escaped an awful Kansas City team, and they’re getting four points against a better team!?! I guess that’s what happens if you’re a hometeam in your billion dollar supermall stadium. I guess a lot of fans in Texas are betting on their team, and raising that line.

As much as I boasted about New Orleans in my best of the undefeated teams post, I’m a little concerned about giving up 7 points to a road team. Yes they beat down the Giants in their friendly confides, but this team has to have a let down at some point this season. Miami can control the clock for long periods of time, and is bound to have a few new wildcat variations in store for this weekend coming off a bye week. I’d be a little higher on Miami and their two game winning streak if they had beat teams that were close to New Orleans caliber. The Jets win was impressive, but if I’m going to pick the Raiders to cover in that one, I have to pick the team I dubbed the best in the league. The Dolphins defense is an aging one, and Brees will outsmart them whether it’s checking to a run or bombing it down field.

I'm a dude that just hit 30 years old. Pretty much like everything that is funny, insightful, and has to do with the Warriors, A's, and Raiders. END_OF_DOCUMENT_TOKEN_TO_BE_REPLACED
This entry was posted on Thursday, October 22nd, 2009 at 10:18 am and tagged with Atlanta Falcons, betting, Cleveland Browns, Dallas Cowboys, football, gambling, Green Bay Packers, houston texans, Indianapolis Colts, lines, London, New England Patriots, New York Jets, NFL, oakland raiders, picks, predictions, preview, San Franciscon 49ers, St. Louis Rams, Tampa Bay Buccaneers, vegas, vs., week 7 and posted in Sports. You can follow any responses to this entry through the RSS 2.0 feed.
« Phightin’ Phils!
A Night Angels Fans Will Never Forget »