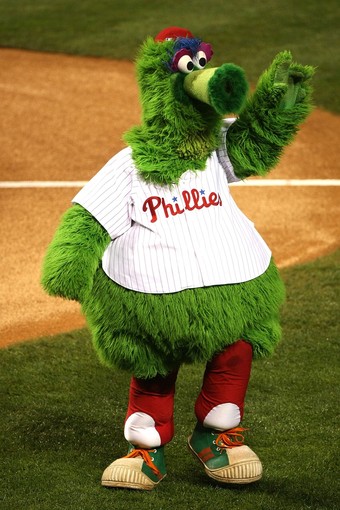 As I watched the final outs of the NLCS, I had to say goodbye to the eastcoast westcoast matchup I hoped for when the series began. I can’t say I didn’t see it coming, but nonetheless it’s always a little disappointing when it happens. There was one thing that struck me as odd though. When they made the last out, didn’t it seem like a lackluster response from the Phillies? Sure they were smiling and stuff, but I didn’t see the normal passion that most teams have after winning the National League Championship. They seemed to trot/walk it into the pitchers mound for the always predictable dog pile, but they way it slowly came together was disappointing to me. Maybe it’s the been there done that feeling, but you’d think we’d see at least one or two guys get tackled or more guys sprinting to start celebrating. All in all, I was a little disappointed in this celebration moment in sports. I bet the Phillie Phanatic showed more emotion when they won! We’ll see if they have a chance at a redemption celebration against the Yankees, er, I mean the winner of the ALCS.

Who is the Best of the NFL’s Undefeated Teams? 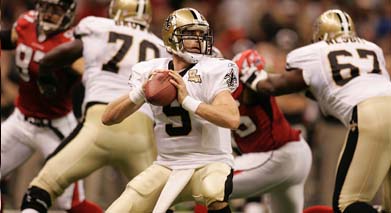 After debating with some friends and co-workers about who is the best undefeated team in the league, I think I’ve made my choice,  and that choice would be the New Orleans Saints. The Saints have made the best case for this spot, and it all starts with Breeeeeesss! His complete demolition of the #1 rated NFC Giants defense was pretty much the marker for how good they are this season. I thought they were good before, but this past weekend has made me see the light! Their run so far has been nothing short of amazing, and their whole team seems to be on the same page on offense and defense. They’ve even showed they can run the ball, but teams will still scheme to stop Brees. They are truly a team that has everything working on all cylinders.  They have a great leader to keep the ship steered straight, and fired up at the same time. I think they are a gambling mans goldmine as they cover the spread every week. One more crazy Brees stat since I’m all over him like Tim Mclelland on those 3rd base calls tonight during the ALCS. He’s got 13 TD’s this season which is only 7 less than all the QB’s in the NFC South combined and he’s had a bye week.

I'd give Peyton the ball in a game against bears...

The Colts came in a close second, and it’s really hard to pick against the reasonable early choice for MVP, Peyton Manning, but at the moment I have them slotted in at #2. We really haven’t seen the Colts at full strength, so it’s tough to say what they’ll be like when Bob Sanders and corner back Kelvin Hayden return on defense. With the relentless Mathis and Freeney, it can only give offenses more problems to worry about. They also recently lost Vinitari the most clutch kicker in a long time! If they get healthy, they might be getting the ball back more often for Peyton to work his magic. Maybe it’s because they haven’t been tested by any truly good teams yet, so there isn’t real measuring stick to go by for them. It’s too bad we won’t find out this week as they should run over a hapless Rams team. I don’t think Vegas can set a line high enough for the Colts coming off a bye week playing the Rams. It’s probably my top pick in doin lines week 7! Anyways, the Colts have the most room to improve of the undefeated teams as Peyton gets better acquainted with his receivers, and their defense gets some extra swagger back with Sanders. Either way, they are going to be a force through the rest of the season.

I think Marshall is as surprised as everyone else that it's all working out in Denver!

The Broncos are a shocker to everybody except maybe, Bill Simmons… I might root against them because they are in my beloved Raiders division, but in the end they have been very impressive. They are balanced, and Orton doesn’t make mistakes. Who cares about his winning record as a QB, it’s all about their defense and preparation for the games. Sure Orton might be a good game manager, but he’s not anywhere near the same league as the two guys mentioned above.  The Broncos have seemed to be one step ahead of their competition every game, and at the perfect times. I along with many kept waiting for the, I told you so loss, but it keeps not happening. I guess they are for real. I kinda thought they were the real deal last year, and crumbled epically bad down the stretch, but this feels like and is a much different team. The only reason I still have a mild doubt is that they haven’t had one injury this year. They haven’t made one change to their regular season opening roster, which makes me wonder if they have any big holes in the backups positions. One crazy stat; they’ve only allowed 10 points on defense in the 2nd half of games. They’ve given up more special teams points in the 2nd half than defensive points. This just shows how great they are at making crucial halftime adjustments. If you can win half the battle you can win a lot of games, even the Raiders D proved that against the Eagles. Bystradaumas wrote a good piece on the Broncos D.

The Vikings come in fourth in this race. I think they have the weakest coach of the bunch, and seem to struggle to hold the big leads that they have had in nearly every game. Giving teams chances could have cost them two games. They could have easily lost to the 49ers and the Ravens. I just don’t have confidence in Childress when the game is on the line, but he’s been lucky so far. Childress feels like a guy that would rather have the clock run down instead of going for an extra score with :40 seconds before the half. His weak decisions will cost them a game at some point, and almost led them to a 4-2 record, which makes me feel like they are at the bottom of these four undefeated teams. I’m really mixed with the Vikes as I like AP and Jarred Allen, but Favre annoys the crap out of me! It’s really hard for me to like or dislike them. It’s really confusing me! So I’ll leave it to you to decide!