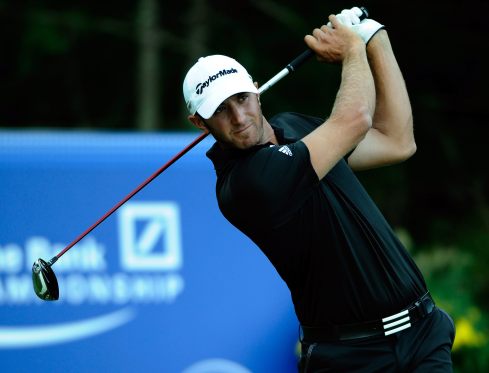 I’ve been a Dustin Johnson fan for about two years now, and today when he sunk his birdie on the 17th/71st hole at Whistling Straights, I thought for sure he’d be the winner of his first major at the PGA Championship. I was really excited for the guy that I’d been pulling for to break through over the last couple seasons. I met him when he was first coming onto the scene, and he was a very likable guy. Really easy going, and someone you truly want to see succeed. He had more Phil than Tiger in him. I thought his coming out party was going to happen when he was leading in the US Open at Pebble Beach heading into the final round, but he choked hard on the 2nd and 3rd holes, and was never able to recover. Even MCeezy, who never watches golf was pulling for him in the US Open. He was right there at the Brittish Open, but Louie had an insurmountable lead after getting favorable playing conditions for each of his rounds, so DJ was an after thought on the leader board as was everyone else on that Sunday. I thought today was DJ’s day since he was one shot up with only one hole to go, but it wasn’t to be as he was once again a victim of himself.

Is it a bunker? I wouldn't call it one, unless the green fees were only $1 for that course....

His tee shot was bad, but the disaster wasn’t even him hitting his second shot from the middle of a hoard of onlookers. You’ve probably heard about it by now. His ball was sitting in what looked like a cart path like area that was trampled from numerous spectators walking on it all weekend. I’m not saying that it didn’t look like a bunker, but it was one f***ed up bunker that looked worse than any municipal course bunker I’ve seen. In the heat of the moment, it was tough to really confirm that he was in a bunker. When he addressed the ball in the f***ed up bunker, he ended up touching his club to the ground, and that cost him any chance at the major. There were boos raining down from the crowd as the ruling was made shortly after he putted out and was on his way to what seemed to be a three way playoff. The ruling honestly killed my enthusiasm for the playoff and the rest of the tourney. I can’t say I don’t agree with the ruling, since a rule is a rule, and they did post it in the locker rooms. The only winner in this situation was CBS, because all the drama at the end had to add to their ratings.

All in all, it was Johnson’s fault for not taking the time to check it out with a rules official or anyone just to make sure that it wasn’t a hazard. Actually if I was DJ, I’d probably have some choice words for Bobby Brown (his caddy) for not noticing that it was a hazard. Every players caddy should be reminding their player of rules on any particular course. The caddies sure make enough to be held accountable for that (10% of the winnings usually). DJ handled it classy though. He didn’t scream injustice or cry about it. He solemnly faced the reporters the same way he did after his implosion at Pebble, and gave them the disappointed answers they were looking for. As an avid golf fan, I’m happy that we will have a better storyline for the major news networks to talk about than how Phil and Tiger did. Hopefully this will be a tipping point to where we can start talking about all the great up and coming golfers in the mainstream media like McIllroy, Johnson, Watson, Ishikawa, Kaymer, and Day.

I'm a dude that just hit 30 years old. Pretty much like everything that is funny, insightful, and has to do with the Warriors, A's, and Raiders. END_OF_DOCUMENT_TOKEN_TO_BE_REPLACED
This entry was posted on Sunday, August 15th, 2010 at 9:37 pm and tagged with bunker, Dustin Johnson, golf, hazard, Major, penalty stroke, PGA Championship, sand trap and posted in Sports. You can follow any responses to this entry through the RSS 2.0 feed.
« Lebron’s List Isn’t Shrinking
Matthew McConaughey Loves Beef »