Blazers and Nuggets Battling It Out to Challenge the Lakers

So far, the start of the NBA season has been somewhat of a disappointment.  Both Cleveland and Boston as well as the Lakers and Clippers all looked like they were still tuning up for the season on opening night.  The Rockets waited three quarters before showing up against the Blazers, and many other games fell short of expectations.  Earlier tonight, the Bulls handled the Spurs with little resistance.  All that came to a head later tonight when the Blazers and Nuggets tipped off.  So far, this has easily been the best nationally televised game of the young season.  Not only do you have the usual suspects, e.g. Brandon Roy, Carmelo Anthony, Chauncey Billups, and Lamarcus Aldridge, but also making their presence felt are newcomers Andre Miller and Ty Lawson.  This is the first game I’ve seen this season that had a competitive feel to it.  At the time of writing, Denver has a 93-91 lead with just over a minute to go in the game.

This got me thinking, are we watching the 2nd and 3rd best teams in the Western Conference?  The Spurs look like they don’t care, and instead are waiting until next year for their once-every-four-year run at the title.  New Orleans appears to have taken a step back.  Phoenix dropped off the radar a while ago, and Houston, with the exception of their slim victory over the lowly Warriors, look like they’ll be lucky to make the playoffs this year.  So, who’s left to challenge the Lakers?  It’s looking A LOT like it’s going to come down to Denver and Portland.  On the Nuggets’ side, Carmelo looks more focused and motivated than anyone in the league thus far.  We know what Billups can do, and Nene looks even better this year, and Ty Lawson is already a key piece in the Nuggets’ rotation.  On the Blazers’ side, Brandon Roy appears to have elevated his game yet again, and he’s quickly becoming one of the most clutch performers in the league.  I can’t wait to see what he does as the game winds down tonight.  Martell Webster looks like he’s finally figured it out, and Juwan Howard is surprisingly playing a key role for the Blazers.  All things considered, we can’t be surprised if we find ourselves watching these two teams battle it out in a Game 7 in the Western Conference Semis, for the right to play the defending champs, who will probably watching from home, waiting, after sweeping whoever their second round opponent was.

If you ever have a chance, you should check out the Jacksonville cheer leading squad. They have as much talent as the Colts and Saints.

Last week went as expected with an easy slate of games on the menu. Three of these were easier to bet on than picking the sun to rise from the east. It yielded my best week in the last four going 4-2-1. It kind of sucks that I’m .500 on the year when there are so many crappy teams out there, that should make this an easy gambling season. Alas, I find this weeks slate a little tougher, so I hopefully I’m not setting myself up for another sub par performance.  Oh well, we’ll see if the 2nd half of the season treats me a little kinder. As usual the home teams are in bold.

Not that I think Chicago is all that great, but I do think Cleveland is that bad. I was pretty shocked to see Cedric Benson and Carson Palmer destroy the Bears defense this past weekend. 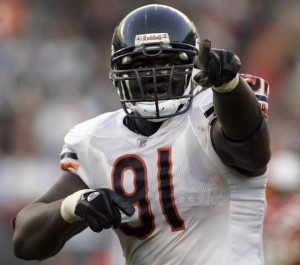 I guess that’s how important Tommie Harris is to the Beard D, who, by the way practiced, and should be back this weekend. Derek Anderson is the proud owner of the leagues lowest QB rating, which can’t go down, right? I guess it could, but I think this should give the Bears D some much needed confidence after an ugly loss. Cutler hasn’t exactly been a Pro Bowler in Chicago, but maybe they just don’t know what to do with a quarterback since it’s been so long since they had one. It’s also a strong possibility that Cutlers’ receivers were just THAT good in Denver. They’re obviously are doing fine without him, so maybe Cutler was a little overrated. Matt Forte has been a ghost in the offense this year, but I’ll give both of their crappy starts a pass. They’ve had a fairly difficult schedule so far this season. Having the hapless Browns at home should be a good cure for them. Remember they beat Detroit 48-24 two weeks ago, so they are good enough to run the score up on crappy teams!

I don’t know whats wrong with Buffalo. They looked like they were moving in the right direction last season, but this year just like Jamarcus, they’ve regressed. Unfortunately for them, the peak of their season may have come in week 1 when they nearly beat Patriots. They haven’t really shown they can run or throw the ball since, which makes me think they won’t be breaking out of the funk. Even TO has said that his numbers are “pathetic” (18 receptions 242 yards with one TD), which shows that even the places they were supposed to improve are regressing to in Buffalo. Houston almost blew a lead last week against SF, but the Niners offense looks better than the Bills, sadly. If Houston can get their defense straightened out, they could be a playoff team. I see Andre Johnson tearing up this suspect secondary all game long, which makes this a pretty easy pick.

This is probably the pick Im most worried about. I missed it the last time these two teams played each other by a couple points as Minnesota won. I think this game will be more emotional for Favre in his first return to Lambeau on the opposing sideline. 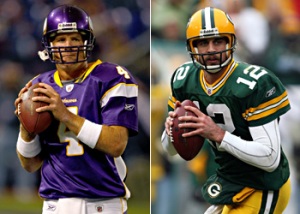 I know I reminisce whenever I go back to a former workplace whether its good or bad memories there are emotional ties, so I can’t see Brett being any different since he spent more time there than anyone expected. I’m looking for the crowd to get to him since they know him better than anyone.  Rodgers on the other hand, looked bad in their last meeting as he was getting knocked down more times than Quagmire has pickup lines. I think he won’t be holding the ball quite as long this time around, and hopefully won’t try to force as many throws. Plus, wasnt it this time last year everybody loved the Jets because they were 4-2? I’m getting excited, it looks like Favre could still be on the path to mediocrity, and he’s one Charles Woodson interception away from losing two in a row. It might just be me, but don’t you think Aaron Kampman and Jared Allen should start a butt rock band 90’s style? Sure, Kampman cut his hair, but everyone got a glimpse of the long headbanger hair in his first year he can grow it!

It’s tough to tell who is the best team in the league between the Colts and the Saints, but both teams have been amazing.

I’ve been riding the Niners bandwagon for most of the season, but I’ll have to step off their train since they’ve lost for me two weeks in a row. I’m sure the Colts will give them all they can handle. Austin Collie has slipped into a very nice complement receiver to Reggie Wayne. The Colts defense is also going to get back Bob Sanders which should give them a little extra swagger. The Niners defense has been pretty good this season, but they haven’t faced an offense as good as the Colts. If the 49ers can somehow get the running game going, their stagnant offense might start producing. I’m not sure I buy the Alex Smith is a worthy first round pick yet, but he can’t be much worse than that Shaun Hill was under center.

I’ve come to the realization that Arizona is in fact for real, and making it to the Super Bowl on a hot streak. Their defense is actually pretty strong, and they may not need to put up 35+ every week to win. Carolina, has been very disappointing to say the least, and I thought they’d rebound and get it together, but it seems like they have given up on this season. Jake Delhomme could be one of the worst QB’s in the league at the moment, and has shown nothing to think the contrary. They have a running game, but what good is that when you can’t throw the ball. What could be worse for Panther fans? They traded away their 2010 first round pick to the 49ers in the Everett Brown trade last off season. Sorry Carolina, but you’ve earned the hottie of the week!

This guy can’t win in the media or on the field. I kind of feel bad for him, but at the same time I don’t really care. The Bye week should be a tough opponent, but I still see him losing popularity and responsibilities before their next game!

Maybe I hyped Atlanta too much last weekend, so they showed me up by throwing in a stinker against Dallas. I really don’t think Dallas is for real, since they only are in the game when Romo plays well. There’s really only a 50/50 chance of that. I think I might have picked the Saints every week so far this season, and miraculously they’ve covered every time! Thank you Darren Sharper for that pick six with two minutes to go last week! Darren, you made the Miller Lite gambling cover of the week! I don’t like Bush saying they can go undefeated, but looking at them at this point in the season it’s hard for me to say they can’t. I see them coming out strong in this one after being worked in the first half of last weeks game.