1. Green Bay Packers – They played on the biggest stage of Week One and arguably put on the greatest show. The defending champs opened the season with a win over one of their primary challengers. The throne is theirs until someone knocks them off.

2. Baltimore Ravens -Wow, I’m on board with the Ravens after watching their dismantling of the Steelers to kick off the NFL Sunday season. Lewis, Suggs, and Reed all look like they’re still the same age as they have been the last 8 years. Who’s gonna stop the Ravens in the AFC?

3. Philadelphia Eagles – It looked like they were going be an average team for the first 20 minutes or so of their game against the Rams, but in the second half particularly, the Eagles showed they should have no problem living up to expectations as an elite team in the NFL this year.

4. New England Patriots – I watched the game with a couple of New England natives, and at one point I actually said, “I feel like the Pats promised someone they’d keep the game close.” That’s what it felt like. Even when they weren’t dominating the scoreboard, they were in control of the Dolphins the entire game. As usual, that’s how they’ll look for thirteen or fourteen of their games this year.

5. San Diego Chargers – The Chargers, thanks to their schedule, have every opportunity to start no worse than 4-1. They weren’t particularly overpowering in their defeat of Minnesota, but they capitalized on Donovan McNabb’s existence.
6.Chicago Bears – No one gave them a chance to win the opener against Atlanta. So, even though it’s just one win, it’s a win over another NFC contender that may prove valuable when it comes to playoff seeding.

7. San Francisco 49ers – Jim Harbaugh notched his first win as an NFL head coach. I’m not sure where the credit should lie, since the Niners didn’t do any one thing special. But anytime you can get 2 returns for TDs from Ted Ginn, I’m sure you like your odds

8. Washington Redskins – Washington took advantage of an injury-riddled Giants team and an uninspired Eli Manning. Rex Grossman was the better QB on Sunday, and the Redskins notched a much needed division win.

9. New Orleans Saints – Brees and co. didn’t disappoint, but the ground game was pretty painful. Not sure if it had anything to do with Reggie Bush, but I expected bigger things from the trio of Thomas, Ingram, and Sproles. There’s no shame in losing to the defending Super Bowl champs though.

10. Atlanta Falcons – Maybe it was just one game, but the Falcons did NOT look good in their opener. The offense is supposed to be their strength, so 12 points isn’t going to cut it – especially when your defense is going to give up 30 points to the likes of the Bears.

11. Buffalo Bills – So far the Bills have one more win than a lot people predicted they would have. Beating the Chiefs is no accomplishment, but putting up 41 points on offense is more than enough to get recognized. Especially when you do it with guys like Fitzpatrick, Jackson, and Johnson.

12. Cincinnati Bengals – The Bengals are only this high because most people picked them to be at the bottom of the league. I don’t think they’re going to be as bad as many predict though. Granted, their victory came at the expense of the Browns, so we won’t go pumping them up into the top ten just yet.

13. Detroit Lions – Matthew Stafford threw for 305 yards and 3 TDs leading the Lions to a week one win over a Tampa Bay team that was over .500 last year. The talent seems to finally be there in Detroit, but can they put it all together?

14. New York Giants – Expectations were fairly low after injuries ripped through the Giants roster in the preseason, but no one really expected them to lose to the Redskins. Lucky for them, the Cowboys couldn’t pull off the win against the Jets, so it won’t be too lonely at the bottom of the NFC East just yet.

15. New York Jets – Mark Sanchez doesn’t set the world on fire, but he seems to come through in the clutch more often than not, which is exactly the opposite of the guy he beat this weekend in Tony Romo. This didn’t look like the team that got to the AFC Championship game, but they didn’t look too bad either.

16. Houston Texans – I’m not sure if the Texans won, or the Colts lost because they didn’t have their captain of the ship running the show, but they did win in convincing fashion. This could be their year to reign supreme in that division.

17. Miami Dolphins – Miami put up a respectable fight agains the Patriots Monday night, but they never really threatened to win the game. Not when you rely on Chad Henne to make throws, or Reggie Bush to be your primary back. He came out of the gates hard and then ran out of gas 4 min into the game! At one point, the Dolphins seemed like they were handcuffed – forced to throw exclusively at Brandon Marshall just to keep his evil personality from coming out. 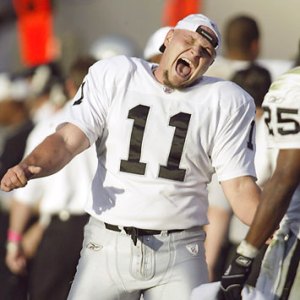 18. Oakland Raiders – At the time Janikowski put his name in the NFL record books for his 63 yard field goal, it didn’t seem like that would be the difference in the game as the Raiders were dominating the Broncos. Still they have way too many penalties to consider them a contender just yet.

19. Jacksonville Jaguars – The Luke McCown era begins with a win, as the Save Jack Del Rio season gets underway. Home games against teams like the Titans are the ones the Jags will need to stay afloat this season.

20. Tampa Bay Buccaneers – Hopes are high this season for the Bucs coming off an impressive 2010 campaign. Kicking off the year with a home loss to the Lions will kill all that noise real quick…

21. Minnesota Vikings – Oh man, are we witnessing one of the greatest, fastest falls from the elite ranks of an athlete this decade? Where does this rank on the Allen Iverson, Tracy McGrady, Ken Griffey, or Tiger Woods scale? Donovan McNabb threw for 39 yards in his Vikings debut. His first pass was  an interception that led to a San Diego TD.

22. St Louis Rams – Expectations are fairly high for Sam Bradford and the Rams, but no one can overlook their ridiculous schedule. They put up a decent (albeit futile) fight against Philadelphia, but things don’t appear to be looking up, as Steven Jackson will miss at least the next week, and Bradford has a banged up right index finger.

23. Cleveland Browns – The loser of the Cleveland-Cincinnati matchup gets an automatic invite to the bottom three in the league. Add the fact that they lost at home. But they were able to move the ball a bit, and managed to put 17 points on the board.

24. Tennessee Titans – The wannabe highest paid player in football rushed for 24 yards on 9 carries, and so went the Titans offense. They struggled to move the ball in a 16-14 loss to Jacksonville

25. Pittsburgh Steelers – They sure didn’t look like a team ready to go to war in week 1. It was more like the U.S. (Baltimore) taking on some third world country  with rocks as weapons in a war. It looked over by halftime as mistake after mistake happened to them. Maybe they got them all out in this opener…

26. Arizona Cardinals – The Panthers gave them all they could handle, but Kolb looked really good in his first game as a red bird. He better be good if they are going to be in shootouts with against a QB making his first start. I have very little confidence in this team going forward, because they need to make some major adjustments on defense.

27. Indianapolis Colts – Poor Indy. They’ve fallen so far in just one week of football. I’d like to see them go out and get someone not named Kerry Col lins. I feel like nobody in the locker room trusts the guy, and why should they?

28. Carolina Panthers – Wow, was Cam impressive. I couldn’t tell if it was terrible defense on Arizona’s part or if he was really tearing them up. Either way it looks like Carolina picked a heckuva player with the #1 pick this year.

29. Seattle Seahawks – Losing to the 49ers in the fashion they did is reason for plenty of pessimism in Seattle. Despite lackluster performances from Alex Smith and Frank Gore, the Seahawks suffered a 33-17 defeat in San Francisco. At least none of their fans got shot.

30. Denver Broncos – They battled the Raiders, but never really looked like they could win the game. It was awesome to hear the crowd chant for Tebow at the end of the game. Maybe it was because they had no running game!?!

31. Dallas Cowboys – You didn’t think they’d be high on these rankings did you? Romo seems to do everything possible wrong in the moment. Maybe he tries too hard to make the big play, but he never makes the right one. They’ve got talent, but there’s many areas they need to improve on, like conditioning. They looked winded down the stretch this weekend.

32. Kansas City Chiefs – Yikes, losing by 36 to the Bills!?! If you thought they took a step in the right direction last season, then this must be three steps backwards. Getting blown out by those proportions and getting beat in every phase of the games lands you last in the ol power rankings!