Raiders Off and Running Wild 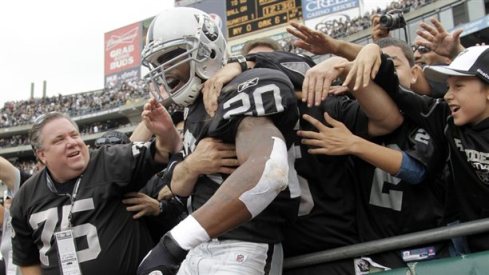 I was cautiously optimistic coming into the season about the Raiders, but looking back, I think I have been for the last three since we dumped Jamarcus. There’s something vastly different about this team this year. Even today against the Jets they improved from the previous two weeks in big ways. Penalties was one. Seven might sound like a lot, but to the Raiders that is a good sign. They are notorious for penalties, and somehow we’ve kept them under ten for two straight games. That might be the longest streak they’ve had in four years. I’ll sum up the reason why I believe they have changed, Hue Jackson has the attention of this team. He has them actually aware of what is going on compared to many past coaches that couldn’t get the players to compose themselves in the heat of the moment. Do I dare call them a cohesive team!?! Just looking at their collapse in Buffalo yesterday’s Raiders would’ve gone into a four game losing streak spiral, but not this team, they bounced back and showed the showtime Jets some real swagger.

Another big reason for my optimism this year was that they actually have some playmakers. Everyone knows, and in most cases rips on Al Davis for picking guys on two criteria, athletic ability, and speed. It took seven drafts drought to finally start picking some of the “right guys”, but it looks like Al hasn’t completely lost his touch that made the Raiders great in years past. Sure, some picks were probably easier than others like selecting McFadden (the best back in the NFL right now) in 2008 looks like a no brainier, but the last three years they took their best three receivers/playmakers in the 4th or 5th round. Guess what the pundits said about the picks at the time? Meh, Crazy Al picking the fastest guy in the draft again… 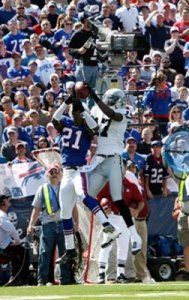 Who were those picks? 2009 4th round pick, Louis Murphy. 2010 5th round pick, Jacoby Ford. 2011 4th round pick, Denarius Moore. I had low expectations for nearly all of them, but at different points they’ve all looked like big time players. Denarius shined for a second straight week. Last week he caught 5 balls for 164 yards and a TD. Today he had an amazing reverse, and broke a few Jets arm tackles for a TD. Jacoby Ford hasn’t even taken the field yet this year, and he is our best receiver imo. I’m not saying any of these guys will be 1,000 yard recievers this year, but everytime any of them touch the ball they have a shot at breaking it into a big play. Hell, even Heyward-Bey has the speed to break a big one, if he can actually hang onto the ball. This team is a run first team, but with many weapons on the outside, it’s become the reason the Raiders are actually consistently putting up 30+ points with a less than exciting Jason Campbell leading the way. Another thing Al never gets credit for is building this offensive line paving the way for McFadden and Bush, three of those linemen were drafted in the last three years as well. This whole rant feels a little strange, because I haven’t defended Al Davis like this in a LONG time.

There is one main concern on defense for the Raiders, and it’s the secondary. I think Mceezy and I have both agreed that the Raiders front four might be the best in all of football. They pretty much hit the QB on nearly every passing play, and do well bottling up RB’s not named Fred Jackson without much help from blitz schemes. They already have 10 sacks on the year. Their glaring weakness is the young Asomugha-less secondary. They seem to account for half the teams penalties called on them for holding or pass interference. They just need to learn to keep their head up, because the front four are putting plenty of pressure on QB’s, so they don’t really need to hold the recievers.