“Check”ing In On My Hockey Picks 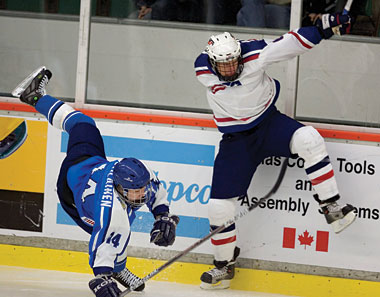 Love that wordplay reference to my favorite move in hockey. Two weeks ago I weighed in my expert opinion on the Stanley Cup Playoffs. The logical thing would be to wait until tomorrow before revisiting my first round picks, but odds are hockey won’t even cross my mind for the next week at least. So, let’s get to it….

In the East, I nailed the Capitals in 5. The Flyers took Game 7 instead of the Sabres, like I had so bravely predicted. Montreal will win tomorrow night as scheduled and the Penguins will take three extra games to dispose of Tampa rather than sweeping. I can’t wait to see how tomorrow unfolds so I can make my second round picks! Or can I…?

Let's Go Oakland....clap, clap, clap clap clap END_OF_DOCUMENT_TOKEN_TO_BE_REPLACED
This entry was posted on Tuesday, April 26th, 2011 at 10:44 pm and tagged with hockey, nhl, Playoffs and posted in Sports. You can follow any responses to this entry through the RSS 2.0 feed.
« Easter Fun
Warriors End Their Relationship With Smart »

6 responses to ““Check”ing In On My Hockey Picks”