Can the Sharks Actually Come Through? 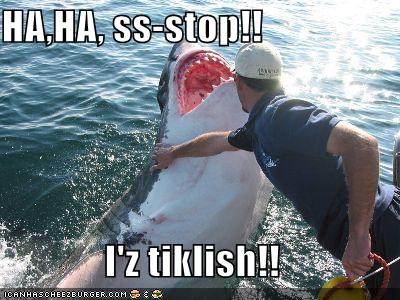 I don’t follow hockey aside from the Sharks, and by saying I follow them, that mostly entails looking at where they are in the standings every once in awhile. Once the playoffs roll around I usually start watching some of their games, and this year hasn’t been any different. I mean you gotta take a break from the NBA playoffs every now and then! I think the real reason I don’t get entirely into hockey is because nearly every year I watch the Sharks just to be disappointed with their playoff performance. They usually have a pretty high seed, and a solid team, but never make it over the hump. It must be the same kind of feeling that Mavs fans have as they are great through the regular season only to suck and collapse in the playoffs. I thought maybe this year would be different, kinda like I think every year will be different for them, but looking at it a little before the game 7 tonight, I don’t seem to have much faith in them. They had a 3-0 series lead on the Red Wings, and are faced to play a game 7 tonight at home in HP Pavilion, which doesn’t feel like much of an advantage. The Sharks are on the verge of being the fourth NHL team to lose a series after going up 3-0. I’m tentatively excited about the game if the SJ star (Marleau) can get his act together, because he’s been non-existent this series. Even his former teammate and my favorite player in video games when I was younger Jeremy Roenick, even called him out.  The whole team has lacked energy in the losses, and it’s probably fair to blame their captain, so I agree with Roenick that Marleau needs to stop being so gutless. I feel like they’ve already booked their off-season plane tickets like Andrew Bynum did. Hopefully they win tonight, but I feel like there’s a much better chance they’ll lose…

“Check”ing In On My Hockey Picks

Love that wordplay reference to my favorite move in hockey. Two weeks ago I weighed in my expert opinion on the Stanley Cup Playoffs. The logical thing would be to wait until tomorrow before revisiting my first round picks, but odds are hockey won’t even cross my mind for the next week at least. So, let’s get to it….

In the East, I nailed the Capitals in 5. The Flyers took Game 7 instead of the Sabres, like I had so bravely predicted. Montreal will win tomorrow night as scheduled and the Penguins will take three extra games to dispose of Tampa rather than sweeping. I can’t wait to see how tomorrow unfolds so I can make my second round picks! Or can I…?

Sharks Need to Swim, Not Sink 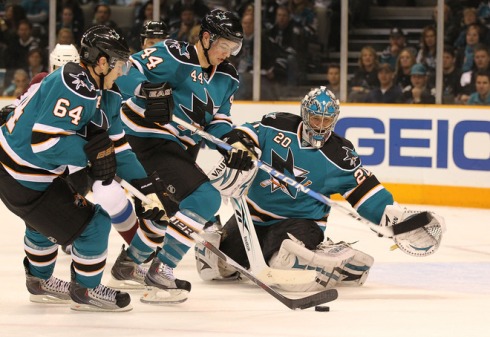 So Doin Work isn’t exactly NHL Central. That we know. We don’t follow much hockey out here in California. It’s not that we don’t appreciate it, it’s just that we don’t feel it like our neighbors to the northeast. But, as a Northern California sports fan, you can’t help but take a little pride in the success of the San Jose Sharks. They’re a perennial contender, and they constantly are reloading their roster with top of the line talent. All the other Bay Area teams are lucky to have one of those characteristics. The problem with the Sharks though – like most hometown teams here – is they can’t get over the hump in the postseason. The Sharks are entering their sixth consecutive postseason, this time, like many others, a high seed in the Western Conference bracket. They’ve failed thus far though, to not only win a ring, but make it to the Stanley Cup Finals. In their early years of existence, the team was a perennial Cinderella, entering as a low seed and scoring some memorable upsets. Lately, though, it’s not uncommon to see the Sharks with home ice advantage, only to bow out of the playoffs early. 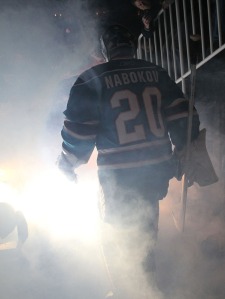 They enter this postseason once again the #1 seed, drawing the Colorado Avalanche. Rob Blake won one for his old team, deflecting a pass off his skate into his own net in Game 1, putting the Sharks in a familiar 0-1 hole. It’s only one game, but one can’t help but think that this is the beginning of another Shark’ playoff meltdown. Game 2 is tomorrow night in San Jose at 7pm local time. Let’s hope they can draw even in the series and not make this another disappointing Bay Area playoff performance.

Presenting the greatest hockey song EVER. Brass Bonanza, the theme song of the former Hartford Whalers, as made famous in NHL 94 on Sega Genesis. Even though the Whalers are dead, the Bonanza lives on!!!

In just over an hour, the ALCS will resume from Anaheim as the Angels attempt to make their arrival to the series.  The Yankees have a 2-0 lead thanks to some timely hitting, and some inept defense from the opposition at the most inopportune time.  Postseason legend Andy Pettitte takes the hill tonight to face off against Jered Weaver.  This is obviously a must win for the Angels.  There’s now way they could come back from being down 3-0 with the Yankees having home field advantage.  Although Weaver is having a great season, New York’s offense can only be held down for so long, so the Angels will have to outscore them and probably even need a 4+ run advantage going into the ninth so the meltdown machine, Brian Fuentes, can preserve a victory and get them back in the series.  Since this is doubtful, it’s likely the Yankees will unofficially put the Angels away, and the bandwagon fans of Orange County will quickly go back to forgetting the Angels even exist.

On the National League side, the other Southern California team will resume play in Philadelphia, where the Phillies hold a 2-1 lead after last night’s blowout.  While tonight’s game isn’t quite as urgent as for their SoCal counterparts, to go down 3-1 would be a huge hole to have to dig out of.  If there was ever a game the Dodgers should be able to take, it would be Game 4 against the capable but unsure Joe Blanton.  Blanton is usually solid, but we all know he’s prone to give up the longball.  Look for the Dodgers to even the series behind some long bombs from Manny and company.

2009 schedule was released, no one would’ve been surprised to look at this game and guess that it would be a 5-0 team versus a 2-2 team.  The thing is, most would’ve expected the Chargers to be undefeated and leading the division.  Instead, while they’ve been underachieving, the Broncos have excelled to a 5-0 start, the first time they’ve done so since the 1998 season, where they rattled off 13 straight wins to start the year en route to a Super Bowl victory.  Tonight will be a battle of quarterbacks, as the overrated Philip Rivers has just 9 more passing yards than Kyle Orton, whom you wouldn’t necessarily say was underrated, but he’s better than the blind quadrapalegic the Chicago media made him out to be.  It’s hard to say how he’ll fare tonight in a hostile environment under the bright lights of MNF, but one thing is for certain.  Tonight is the night we’ll find out if the Broncos are for real, and we’ll also see if the Chargers run under it’s current nucleus has run its course.

Let’s be honest here, Doin Work isn’t exactly the foremost authority on the hockey world, but a big game is going down at 7pm Eastern time at Madison Square Garden.  The 7-1 Rangers, who are tied with Pittsburgh for the best record in the league, will host the San Jose Sharks.  San Jose has struggled to a 4-3-1 record, but they’re coming off a season in which they had the best record in all of hockey.  If they want to still be considered a contender, tonight’s game will be a huge proving ground for them.  Sharks’ forward Dany Heatley scored 10 points in his first four games with the team, but is scoreless in the three games since.  He’ll need to get back on track if the Sharks are going to stand a chance.  I can’t predict what will happen, or even really care for that matter, but keep the Versus Channel in your rotation tonight when MNF and MLB are both at commercial.