Changing of the Eras in the NBA? 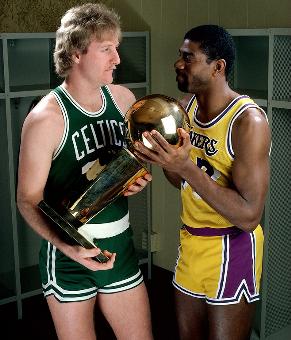 I’ve watched as much as I could of these NBA playoffs so far, and with every lower seed playing the higher seed tough it got me thinking about the state of the NBA. Make no mistake, t’s in a great state right now as every team in the playoffs looks good even some of the lower seeds. In basketball we usually don’t see a ton of surprises, because you don’t surprise any team four times in a series. That’s what basketball has right over all the other sports, they always get the true champion, because no road traveled is easy. That’s not really the case in every other sport. Coming to conclusions like this makes it even tougher as a Warriors fan…

I guess the first question that popped into my head is this one of the last chances for the “older” teams to win a championship? Maybe not this year, but it’s coming. This year we have the traditional favorites that you can’t really bet against like the Lakers, Celtics, and Spurs, but how much longer can their reign last? Most of their top-tier stars are well into their 30’s, and these teams are all stumbling a little already in this first round. I’m not saying that I’ve counted these teams out already for this year or next, because that would be ridiculously short sighted. I do find myself having a hard time seeing them continue their dominance beyond this year especially last years finals pairing. The Lakers and Celtics will have some huge questions to answer at the conclusion of the season.

Both are going to be praying that their coaches stay, and Phil has already said he believes there will be a long lockout which is a reason he wants to retire. Doc might be thinking the same thing. New coach and new system doesn’t usually equal championships, but you can teach an old dog new tricks every once in awhile. The Spurs are finding it impossible to have their big three healthy and together when it matters for the past few seasons. Maybe the lockout would help them since they wouldn’t have to play nearly as many games, keeping these older guys fresh without a long regular season might be to their advantage, but at the same time I don’t see that making up for slowly eroding skills. The NBA is an era league, that started way back with Bill Russell dominating. More recently, we went from the Bird-Magic era to the current Kobe-Duncan era, so are we heading into a new era? Oh my the possibilities that are coming to light are enticing.

The East is stacked with young superstar talent as we all know. The Bulls, Knicks, and Heat are sure to be battling it out for years to come barring injury of course. Nearly all the superstars on those teams have had previous playoff failures, so in my eyes these teams aren’t as inexperienced as some would have you believe. The West isn’t as clear cut as the East in terms of power, but the Grizzlies are the second youngest team in the league, and have showed promise against the Spurs just like the Thunder did with the Lakers last year as an 8 seed. OKC is the seeming favorite to be the heir apparent to the Western Conference Throne, and I can’t argue with that. A side note on the Sonics, why doesn’t every GM follow the blueprint that they used? Get a superstar, have cap space to spend on the other players, build through the draft, and boom, you have an elite team. The Clippers have a solid core with a superstar that can only get better, oops, I shouldn’t ever put the Clippers in a championship post… Anyways you get the point, and my question is who’s era is it going to belong to?

Today is the unofficial holiday in the US for weed. In Cali there’s always quite a bit of celebration going on, and especially in cities like SF. I remember one year going to a parade in SF, and many people were dressed up like different types of weed, bongs and hippie stuff. One thing is for sure during this day, there’s no trouble started from these groups celebrating. It might be one of the least threatening holidays there is. This John Holt song came out back in 2001, and was one of my favorite songs in my early college years! For some reason a lot of people think this is Eek-a-mouses song, but it doesn’t sound like him so I’m not sure why that is…