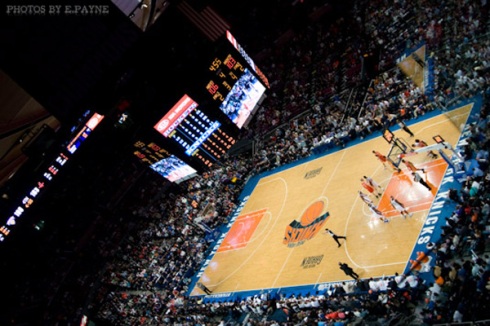 I’m watching this Knicks-Celtics game on ESPN and I can’t tell you how good it feels to see the Garden rocking again like it’s 1995. I’m not one to root for New York teams, but sometimes you get to a point where you need that hated team to be good again. It just makes the game more interesting. It’s been about 10 years since the Knicks were good. I rooted against them for all those years, but eventually, you want that team to be good again, so you can resume rooting against them. It’s just not as fun when teams like the Knicks, Lakers, and Celtics aren’t good. It helps that I have Amare Stoudemire and Wilson Chandler on my FIRST PLACE fantasy team (and Amare just threw down an emphatic dunk!), but it’s great to see Madison Square Garden getting loud for a game against the Boston Celtics. Guys like Amare and Raymond Felton are probably enjoying their best days as professional basketball players.

The Knicks are like the Yankees, the Cowboys, or even the Cubs…. You hate them, but it’s just not as fun to hate them when they’re not good. So here’s hoping the Knicks make it back to the playoffs this year, but ONLY this year. They’ll probably need to pick up a few more guys I don’t like though. Because, all these former Warriors and guys on my fantasy team are making it hard.

7 responses to “Welcome Back New York”