End Of An Error

We’re still waiting for our first big free agent signing of the offseason out here in Oakland. Though the biggest move to date may be addition by subtraction, as another MLB club has finally taken Jack Cust of our hands. The A’s have been seemingly trying to get rid of Cust for a few seasons now, and today the Seattle Mariners took a chance on the slugger/walker/striker-outer. At the beginning of last season, the A’s designated Cust for assignment, hoping another team would claim him. After he cleared waivers, he reported to AAA-Sacramento until injuries on the big league roster would force him up. He played uninspired ball the rest of the season and helped the A’s to another underwhelming offensive campaign. Cust made popular the “three true outcome player.” Each of his at-bats would surely end in one of three outcomes: a home run, walk, or strikeout. Problem is, two out of every three ended in a strikeout. His homers never seem to come when they counted, and his walks were mostly the result of resting the bat on his shoulders for 6 or 7 pitches. Throw a breaking ball, and you’ll surely strike him out. I know what the Mariners were thinking, he’s a guaranteed 20 HRs a year, but does this mean they’ve been sitting there for the last three years thinking, “where can we find a left-handed Richie Sexson?” Seriously, Mariner fans, that’s what you should be thinking right now.

Cust has got to be my most loathed player on the A’s in the last decade. There aren’t many, since the A’s have a knack for having blue-collar hustle guys. Pitching, defense, and basically fundamentals reigned supreme. Cust is none of these. Instead, he occupied the fat, lazy designated hitter spot and led the league in strikeouts three consecutive years. His 197 in 2008 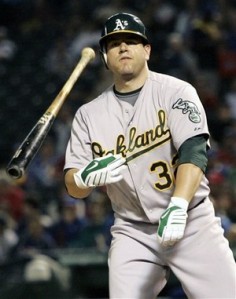 were particularly impressive. I won’t even get into his defensive shortcomings. The good news is this opens up a spot for a power hitter the A’s so desperately need. I share Chappy’s sentiment in that I don’t want them to break the bank on an older player who’s best days are behind them, but that may be our only option. And, if you give me a choice, I’ll take anybody over Cust. Right now it’s looking like Hideki Matsui, but I’d be happy with Doris Matsui at this point. Alright, so Cust isn’t that bad; I’m just happy for a change.

“You want to go where you’re wanted,” Cust said. “In Oakland, even though I always did pretty well there…I’m sure they’d say I struggled in spring and what I did the three years before wasn’t good enough to make that team, I guess…..When I talk about Oakland last year especially, it’s definitely not a very positive experience for me. So I’m trying to block that out a little.”