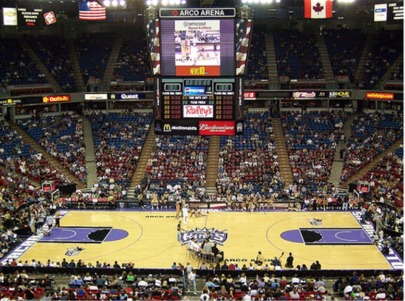 I made my Arco Arena debut last night – a week and a half after my Oracle Arena debut – and caught the Kings and Pacers. Yes, it was as bad as advertised. Indiana fans will argue that their team is 9-7, and I even picked them to make the playoffs this year. But trust me, they’re not very fun to watch. Danny Granger is one of the league’s great players, but along with Mike Dunleavy and James Posey, they stand around and jack up a lot of threes. Roy Hibbert is surprisingly polished for someone I never thought would be a solid NBA player. I really thought he was going to be the beta version of Hasheem Thabeet. On the Kings side, Tyreke Evans had a few highlight moves, but seems to have taken a step backward from last year’s Rookie of the Year campaign. There were only two players on the court that impressed me…..

Demarcus Cousins – After an impressive summer league that had many predicting back to back ROYs for Sacramento, Cousins has struggled out of the regular season gate. He’s been mired in foul trouble and proved the knocks on him to be true with his whiny demeanor on the court. Hell, he even got kicked out of practice on Monday. Last night, though, he looked like a future all-star. Cousins is ridiculously quick off the dribble, blowing by post defenders for some strong finishes inside. He fought hard on the glass and even showed a smooth stroke from the perimeter, knocking down some shots from 18 feet. He finished with 20 pts and 8 rebounds, and was +6 during his 23 minutes on the floor – pretty good for a guy who’s team lost by nine.

Josh McRoberts – Here’s a guy who wasn’t that dominant at Duke, and played in just 8 games in his rookie season with Portland. He started only three contests through his first two seasons in Indiana since. This year, he’s started all 16 games for the Pacers, and last night, he looked particularly impressive. His line of 7 pts, 3 reb, an 4 ast isn’t

overwhelming by any stretch of the imagination, but he made some great plays on the court. He was somewhat limited due to foul trouble, but along with some sweet dimes, he had two amazing highlight plays. One was a thundering alley-oop dunk from Darren Collison that could be seen on NBA.com’s Top 10 Plays of the Night. The other was a blocked dunk attempt on Jason Thompson that should’ve been on there, but the video is nowhere to be found. I’m pretty excited to have this guy on my fantasy team, since I just added him to replace the injured Reggie Evans. (Yes, my team is that bad, despite my 3rd place standing). If McRoberts gets the minutes, he’ll be a breakout player this year.