Ohio State just had five of their best players suspended, including QB Terrelle Pryor. Definitely not a Buckeyes fan, nor do I feel that this was all that solid of a punishment. They took a measly $1K to $2.5K, and are all paying for that with a five game suspensions. The main part I don’t understand in this whole suspension is why these players get to play their bowl game this year. If all the evidence is there, shouldn’t the NCAA suspend all of them for the bowl game, and the first four games of next year for the five games?!? Personally I think they should, and that feels like a much stiffer penalty than the one handed down. Missing a bowl game and most likely losing it because you are missing five of your best players seems more fair in my book. Maybe the NCAA is trying to protect itself so if they run across something on Cam Newton, he will still be eligible for the Championship game, and then they could suspend him for next year when he’ll be in the NFL anyways keeping everyone’s pockets fat.

The Bobcats are blowing up the team to start 2011 with fresh outlook, after a season of underachievement. Adrian Wojnarowski wrote a good one on Yahoo about how the Larry Brown-Michael Jordan relationship all broke down starting back in 2008 when Jordan wanted to draft Brook Lopez, but ended up listening to Brown and drafted DJ Augustin. Change was obviously needed. I’m not sure what to make of Paul Silas coming back to coaching after being out of it for awhile. I thought he was a great coach for the Hornets the first time around with BD, Mashburn, Magloire, and Steve Smith, but this Bobcats team is nowhere near them talent wise. Either way, I’m sure he’ll be better than Art Shell was coming out of his hiatus back to coaching. I loved that Jordan brought Charles Oakley in as an assistant coach. 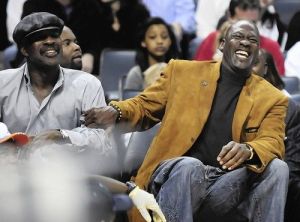 Last week Oakley blasted Charles Barkley for being lazy and just getting by with his athletic skills. I won’t argue with Oak, because he’s probably taking mental notes and I don’t want to be on that list. Lebron’s list is fine, but Oak’s isn’t. I was more wondering if he knew what was about to happen and wanted to say “Chuck, stay behind a desk and keep being lazy cracking jokes on TNT instead of trying to coach or be a GM, you just don’t have the work ethic.”

Phil Jackson sounded off about not wanting to play on Christmas saying “I don’t think anybody should play on Christmas Day. Soccer teams don’t play this time of year, they take a break. I don’t understand it… It’s like Christian holidays don’t mean anything to them anymore. We just go out and play and entertain the TV. It’s really weird.”

Ummm, we know Phil is full of head games, but seriously Phil? I know you guys work hard and all, and maybe most don’t want to work on this glorious Christian holiday, but sports is a form of the entertainment industry, and when are the most people watching? When they don’t have work! You and your squad are paid ridiculous millions to play, so give us some damn entertainment. If you want your team to suck and not be one of the marquee match ups on Christmas I’m all for it. I’d love to see the Lakers not be on TV during Christmas because they aren’t relevant, that would almost be as good as any present I could get. I can make a list of the cons of my job a mile long, and I’m sure everyone playing on Christmas would much rather have that be their biggest “problem over a the average citizens problems like even having a job. I’m positive Jeanie will be able to handle giving out the solid gold PS4’s you got the kids this year. Plus, if there were no basketball games on Christmas, how could I parlay my Christmas money on some games to have an even better Christmas?!?