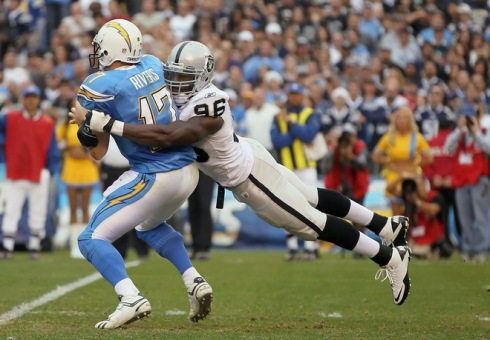 I don’t really have any analysis on the game, since I was busy putting up Christmas lights at my parents’ house, but what a win for the Silver and Black today! I really didn’t see much hope for the Raiders to sweep the season series against a San Diego team that hadn’t lost in December since Philip Rivers became the most maligned player in the NFL, so I didn’t go out of my

way to catch. I’ve wasted too many Sundays watching games like the ones against Miami and Pittsburgh. A December showdown AT San Diego didn’t really seem like one worth catching. But alas, the GOOD Raiders showed up once again and dominated the Chargers en route to a 4-0 division record – for the first time since 1990, which could prove huge with Kansas City leading the way just two games ahead. The two teams still have a matchup looming on the schedule. All I know is, being in the hunt at 6-6 this late in the season may be the best thing going for an Oakland fan these days. Even if they end 6-10, you can’t take away the fact that they won both games against the team that had won the division for the last I-don’t-know-how-many years.