Why Is Bob Geren Still Here?

That’s a rhetorical question. Bob Geren is still here because he’s Billy Beane’s BFF. I just really wish the A’s would try to find a good manager instead of apathetically letting the GM’s buddy run the show. Today, the Oakland Athletics exercised the option on Bob Geren’s contract for 2011, meaning he’ll be back for another year at the helm. It’ll be his 5th year as manager and he has yet to top 76 wins. Granted, he’ll most likely top that this year, but the guy hasn’t even managed a .500 season in his tenure. He has a career record of 302-334. What club actively brings back a manager after four consecutive losing seasons? It’s not like they’re a struggling franchise like the Royals where a 70 win season could be considered a success. This is a team that had EIGHT STRAIGHT WINNING SEASONS, capped by an ALCS berth. Then the Geren era began, and it’s been all losing ever since. Sometimes I feel like Lou Wolf and the A’s ownership are recreating the classic film, Major League – I probably allude to that every time I write about the A’s – except Lou Brown would probably do a better job.

I think it’s time for the A’s to do what the other Oakland teams did and bring back an old coach that had success. The Warriors brought back Don Nelson and before you knew it were back in the playoffs. The Raiders brought back Art Shell and they only gave up 332 points – their lowest in a season to date since the Super Bowl season in 2002. They went 2-14 but that’s neither here nor there. It’s time to bring back Art Howe. Maybe Ken Macha will be available after the Brewers finish the season. Shoot, Don Wakamatsu, former A’s bench coach, is available. Oh 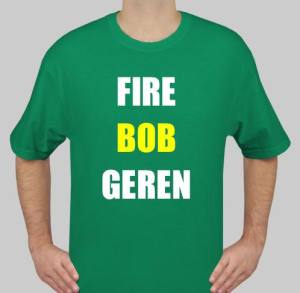 wait, we’re locked in on Geren for another sub-.500 year. I guess the A’s are just going to milk another revenue sharing season and let attendance dwindle even more so they can continue to build their case to leave Oakland. I’m fed up with this charade. The fanbase is there, but this ownership regime continues to alienate. I’m the biggest A’s fan I know, but it’s hard to support a group that simply can’t compete. Sure, there are some great young players, and the future is bright, yada yada yada. But Get Carter had a great cast and that doesn’t make it a good movie. Anyway, I’ll sit through one more year. It’s not like they signed Geren to an extension; they just exercised his option. That’s same thing as someone putting on Get Carter, so you sit through it, as opposed to going to the theater and buying a ticket. I’ll tell you this much though, if the A’s buy a ticket to Get Geren next year, I’m done. But by then they’ll probably have a deal in place to move somewhere so I won’t really care…..

Let's Go Oakland....clap, clap, clap clap clap END_OF_DOCUMENT_TOKEN_TO_BE_REPLACED
This entry was posted on Thursday, September 23rd, 2010 at 7:10 pm and tagged with Baseball, Bob Geren, fire bob geren, major league, MLB, Oakland Athletics and posted in Sports. You can follow any responses to this entry through the RSS 2.0 feed.
« One on One in Alcatraz
Ode to Nellie »

5 responses to “Why Is Bob Geren Still Here?”