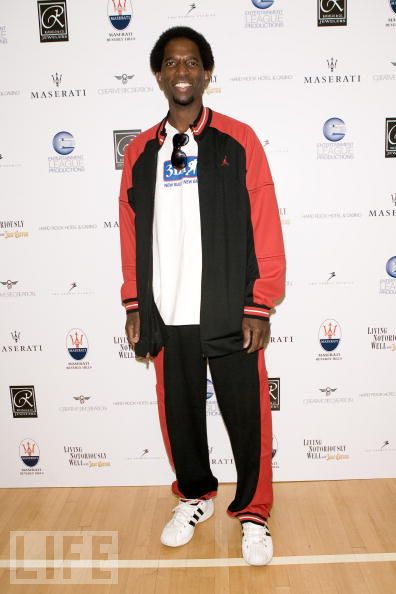 Due to a Sunday morning obligation, I stayed in Saturday night and channel surfed what ended up being a wave of RFPs. The star of the show was none other than NBA Ironman, A.C. Green. Green was cohosting a religious show on channel 95. I didn’t even recognize him at first. Whereas most retired athletes tend to pack on the pounds, AC looks like he’s been on a decade long fast since his playing days. The guy is so skinny he looks like he should be writing for Doin Work! Obviously Green ditched the jheri curl long ago, but he’s also left behind the flat top he rocked in later years. Green now sports the semi-fro, with a soul patch to boot. We all know about AC’s incredible consecutive games streak – he basically played every game from 1987 to 1998. Nowadays he’s an ironman on God’s court.

After I got bored of that show, which was pretty quick, I stumbled upon some NBA D-League action. The Dakota Wizards were taking on the Erie Bayhawks. One guy stood out right away. Former Georgetown standout Michael Sweetney is a member of the Erie club. Now, talk about a guy who’s packed on the pounds. I didn’t even recognize him at first. There’s a number 50 across the front of jersey, but you can’t help but notice the belly and two boobs first. He can still play, as he went for about 20 points, but based on his appearance and lack of mobility, I wouldn’t expect to see him back in the big league any time soon.

Also on the Bayhawks is former Santa Clara University star, Big John Bryant. While Bryant’s size is the main thing keeping him from the NBA, he put it to work last night. In just 17 minutes, he logged 6 points to go with 6 rebounds, but he made his presence felt on the defensive end, blocking 5 shots. The Dakota team boasted an even more unknown player that caught my eye in Corsley Edwards. Edwards was a former 2nd round pick of the Sacramento Kings in 2002. While he struggled from the field, 3-13, he saved his best play of the night for the final possession. With the clock winding down, Edwards drove and dished to a wide open guy (it’s the D-league, you expect me to remember everyone?) for a buzzer-beating, game winning layup.