Players That Should Consider Getting Their AARP Cards

I’ve never been a fan of watching athletes hang on like reality stars do when they reach the 29th second of their 30 seconds of fame. They hold onto their glorious lifestyles as long as they can, and it’s not my call to make, but based mostly on the bad taste it leaves in everyone’s mouth. I’d much rather see some guys out of the league at this point, but there’s always some owners that will pay. It’s sad to watch the best of the best fall into mediocrity. Yeah, they can still play, but they aren’t helping their teams like they think they are. Unless you are a freak like Dikembe Mutumbo there’s a big chance you won’t be playing into your 40’s. Every team has at least one guy that the fans, the media, and the players know that it’s time to call it a career. In the wake of the AI gambling and seeing his production drop off the map over the last two years, I guess it’s as good a time as any to scan through the league rosters, and pick out some guys that may as well apply for the AARP. I’m sure it was a nice ride no matter how long or short it was! I don’t really blame any of them for holding on as long as possible, but at some point enough is enough. Adam Morrison almost made the list after the convincing argument MCeezy made on his future RFP of the day eligibility. Alas, I’m going to keep this list to guys that have had their shot, and either aren’t cutting it or aren’t good anymore.

The Warriors selected him #1 overall, and he played well for a few seasons, but wasn’t much more than a role player for most of his career. I would’ve been more happy with any of the four guys that followed him in the 1995 draft KG, Sheed, McDyess, and Stackhouse. Now he’s in his 14th season, and doesn’t see very much court time (9 mpg), so maybe he should consider ending his run. The 34 year old just keeps lasting, and I’m not sure how, but he does. I’m sure he’s helped teach Josh Smith a thing or two, but they could get him to coach at a reduced rate.

I’m sure everyone in New Orleans would fill up Bourbon Street if Peja decided to retire instead of playing next season where he’s owed a whopping $15 million. He’s easily gaining steam for one of the worst contracts in the league at the moment. His 12.6 points and 3.4 rebounds per game isn’t what you really want out of one of your “star” players from the forward spot. He could be a reason why they struggle up front, and his declining FG% and 3PT% isn’t helping him win over any Hornets fans. Has anyone seen him since he got that buzz cut? It took me literally two minutes to figure out who that old looking guy was on the court. He might need to invest in some Rogaine or plugs with that $11 million check he cashed in this year.

I still never understood why this guy was in the league in the first place. I never really saw him as a dominant defender like the next guy on the list, and his career high in ppg was 2.9. Is this what Thabeet will turn out like? He’s averaged 14.7 minutes a game over his career. Time to pull the plug on this never ending project of supposed upside.

I’m shocked how long he’s lasted past his better days. I’m surprised he has survived on the ability to rebound and block shots, but if Diop played more than two years Foyle has earned his worth. His career high in ppg was during his 4th season in Golden State, for a whopping 5.9 per game. Maybe he’s just the breathe of fresh air in the locker room that a team needs in a league filled with “thugs”. He’s a well rounded intellectually, but since he’s been active about as much as he’s been inactive the past few seasons it looks like his value down low just isn’t worth it anymore. He’s played a total of zero minutes this year, so it’s about time to make it official Adonal.

Ah, the inspiration for this post. I don’t want to remember Iverson the way he went out. Fading skills surrounded by silly personal arrogance that kept teams from being able to be utilize his talents off the bench. I’ll remember him for his glory days on the Sixers. It’s sad to hear he has a gambling problem, but I’m not truly shocked about anything in the TMZ type atmosphere we live in now. I hope he doesn’t end up like the countless athletes that have gone broke when their playing days are over. It’s good he has come to the realization that his days as a top notch player are over, and has tentatively retired. I won’t rule out a return next year though… 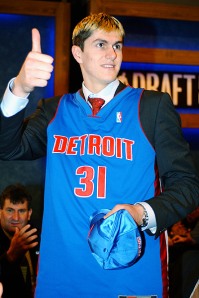 His name hits the same cord as Adam Morrison’s name when I hear it. One of the worst draft busts we’ve come across over the years. Can you believe he’s been in the league for six years already!?! He didn’t find much playing time in New York this year, and ended up in Minnesota. He’s playing a little more, but still is only averaging 5 points per game on the season. If he hung it up today, I’m guessing he could go back to Serbia and live like a king with a 1 Serbian dollar to 1 US Cent conversion rate! Not a bad way to go out for a guy that teams kept giving chances and didn’t pan out. If I’m still mildly bitter about drafting Joe Smith, then Detroit fans have a long ways to go on Darko buyers remorse.

It’s funny I didn’t even know he was still playing until he got traded to the Celtics. I guess Spurs fans would barely know either, as he’s only played in 25 of their 63 games all season. I’ve always had a sports hate for him, and I’m sure it was based on him playing for Dallas. Regardless of how many old guys are on the Celtics, Finley (36) should call it quits when the year is over. I don’t mind him being a role player to try and win a Championship, but it feels like this should be his farewell tour.

I'm a dude that just hit 30 years old. Pretty much like everything that is funny, insightful, and has to do with the Warriors, A's, and Raiders. END_OF_DOCUMENT_TOKEN_TO_BE_REPLACED
This entry was posted on Wednesday, March 10th, 2010 at 12:40 am and tagged with AARP, adam morrison, adonal foyle, Allen Iverson, bad players, basketball, draft busts, Joe Smith, Lindsey Hunter, Michael Finley, NBA, old players, past prime, peja stojakovic, retire and posted in Sports. You can follow any responses to this entry through the RSS 2.0 feed.
« Seriously Royals Fans?
Heat Seeking Missiles »

22 responses to “Players That Should Consider Getting Their AARP Cards”