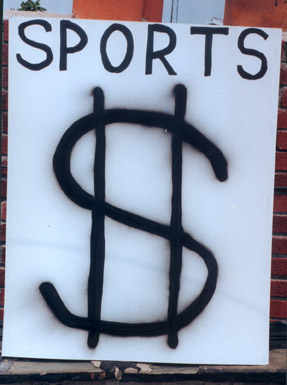 In these tough economic times, when it feels like your money isn’t going all that far, just remember that there are plenty of people that are worse off than you. USA today had a study on athletes, and it found that 78% of retired NFL players are bankrupt within 2 years, and 60% retired NBA players are broke within 5 years. So congratulations to all the rookies out there! They’re usually thrown into the glamorous filled lifestyle of the rich and famous, but that life is usually abruptly ended, and they end up being just an anecdote in one of my pointless posts! Far too many times we see athletes blow off hundreds of millions of dollars, but there should be no reason to be surprised. They have to realize they just can’t blow through cash like Joey Chestnut powers down hot dogs! Here is a list of things that some players didn’t realize weren’t within their means.

Taking the Lil Wayne approach. This guy already has two kids and is about to have two more with two different ladies on very close due dates.

Travis and six of his eleven kids

I’m not saying don’t have kids, but he could easily go broke down the line just like Travis Henry who has 11 kids with 10 different women. In March of this year he was pulled over and arrested for failing to pay $16,600 in child support. He is currently in jail for trafficking cocaine. Shawn Kemp ran into similar problems having at least 7 kids with 6 different women.

Buy a private jet. Burn money like it’s going out of style! Scottie Pippen borrowed $4.375 million to get himself a personal jet. Did you know that it costs about $50K to fix a windshield on one of those!?! I’m sure that insurance, fuel, and a personal pilor are good investments to ride in style to the next stop on the road trip. Apparently, he still owes the airplane company $5 million.

You could go by sea if you don’t like flying. Latrell Sprewell tried to hide his 70 foot yacht in storage, until the bank foreclosed on his house and yacht. He famously turned down a 3 year $30 million contract stating “I’ve got a family to feed”.

Ballin out of control. Most players fall into this trap. They don’t drive their own cars. They don’t write their own checks.  They don’t raise their own kids. They just play their sport and let others pick off their carcass like vultures. Just look at how Vick turned out, as his friends ran his life outside football helping lead to his dog fighting ring.  For some reason most athletes set up a large support system behind them, and because they are the only ones supporting it they go broke! LaTroy Hawkins offers his advice to teammates “When I was a young buck, I was trying to spend all my money. Now I try to preach to young guys in the clubhouse who are like that. I’ve got all this stuff from 10 years ago — jewelry, rims — that I think, Why the f— did I even buy this?”

Screw up, deny everything, and fight it with all the lawyers and cash you have. Rodger Clemens sold his Bentley last year to none other than Bret Michaels. The sale of the car was reportedly to pay for legal fees.

Kareem signed over his power of attorney, and then let an agent named Tom Collins have his power of attorney. It cost Kareem about $9 million before he figured it out. Mark Jackson was taken by one of his business managers who forged about $2.6 million worth of his checks to get his gambling fix. Barry Bonds seems like he’s well on his way to this dilemma.

So in the end, athletes are just like many of our own friends and people we know. Maybe our friends aren’t going bankrupt or quite as extravagant as these athletes, but we all know people living out of their means. A recent study suggests that if you make $35K a year you will never retire. I myself think I could contain my own spending if I hit the lotto, but then again I am a sucker for a friend in need and I can think of a lot of them that would probably hit me up.

I'm a dude that just hit 30 years old. Pretty much like everything that is funny, insightful, and has to do with the Warriors, A's, and Raiders. END_OF_DOCUMENT_TOKEN_TO_BE_REPLACED
This entry was posted on Friday, July 31st, 2009 at 8:36 am and tagged with athletes, bankruptcy, basketball, broke, football, Jack Clark, Joey Chestnut, Latrell Spreewell, Lil Wayne, NBA, NFL, Rodger Clemens, Shawn Kemp, Travis Henry and posted in Sports. You can follow any responses to this entry through the RSS 2.0 feed.
« Doin Work E-mail debate: Who Else is on the list of 100+ that used PED’s?
No Surprises on the NBA 2009-2010 Schedule »

3 responses to “Go For Broke!”