Early Predictions for the MVP 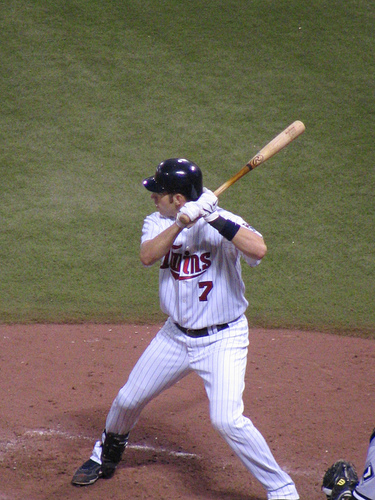 Mauer has been my fantasy teams MVP this season, but does he have a case for the AL MVP this year? Currently ranked 3rd in Yahoo fantasy games, Mauer figures to be a top contender in the running for AL MVP. You can’t say that he’s been a huge surprise, because he’s always been an elite hitter consistently in the batting title race, but it’s his home run totals that have made his case much stronger for being the MVP this year. It’s pretty tough to argue with the man’s stats so far, .383 average (1st in majors), slugging .643 (1st in majors), 1.088 OPS (1st in majors), 25 homers (10th in AL), and 77 RBI’s on the season even after missing nearly the whole first month. It’s too bad the Twins are starting to fade back in the race for the central, but I feel he should win the AL MVP if he keeps his current pace. Who knows, a .400 batting average may not be out of reach either!

I don’t blame people for picking Mark Teixeira as he is having a great season with 30 homers and 86 RBI’s, but he hasn’t had the better overall season that Mauer has.

They are both top notch gold glovers on the defensive side at their positions, so that’s a wash. Besides, nobody picks the MVP based on their defense, because that’s what gold gloves are for. If I did for argument’s sake, I’d have to say playing catcher would have to be a little more difficult than first base. In evaluating an MVP, you have to include other factors like the ballparks they play in. The new Yankee stadium is obviously a hitter’s park, while the Metrodome is much more of a pitcher’s park. Maybe that doesn’t even out the home run totals, but when you look at the fact that only 11 of Teixeira’s homers are on the road, it has to be weighed in. The Yankees have scored sixty more runs than the Twins this year. I’d assume that that is why Teixeira has more RBI’s as he has more chances. Stats would support that as well as Mauer is hitting .403 with RISP, and Tex is hitting .258 with RISP. Who is more clutch for their team? Numbers say Mauer.

Many argue that the MVP should come from a team that is going to the playoffs. This definitely hurts my Mauer argument, but it’s unlike basketball where it’s basically a requirement to be on the best team. 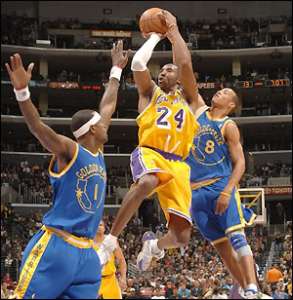 Baseball’s voters don’t limit their view to the best teams as there have been 47 MVP’s that didn’t make the playoffs. It is one of the criteria, but it isn’t weighed nearly as heavily as football and baseball. If Kobe wants to try to take the MVP he can chuck up 50 shots a game, and surely he’ll average 35 per. Drew Brees can throw the ball 50 times in a game to put up crazy numbers (Wait, he already does that. Bad example.), but in baseball a hitter only comes to the plate once every nine players. He can’t control how many times he bats or if his teammates don’t do anything at the plate. So penalizing Mauer because his teammates are worse is unfair.

As for the NL MVP race, it’s pretty clear cut that Pujols is leading the way. He doesn’t look like he’ll win the triple crown, but it’s still not out of reach for him. He should be going for his fourth or fifth MVP by now, but for some reason the voters decided to pick someone that is more valuable to a team than him a few times. Most recently, I don’t see how Ryan Howard won the MVP over him last season. Not that Howards numbers weren’t incredible, but how can anyone really say that Pujols isn’t more valuable to his team than Howard? 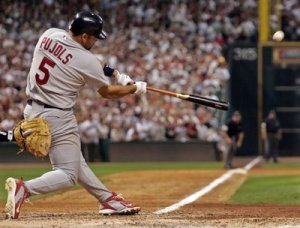 The Phillies have three guys that can potentially win the MVP  every year. The easiest way to prove this theory is seeing how well Ibanez has benefitted from moving to a hitter friendly park and hitter friendly lineup. He is even in the race for the NL MVP if he can shake off the post injury rust. It’s like the Teixeira argument; he just has better players around him to help him put those stats up. Now that Pujols is matched with Holliday, his numbers should be indisputable by seasons end.

I'm a dude that just hit 30 years old. Pretty much like everything that is funny, insightful, and has to do with the Warriors, A's, and Raiders. END_OF_DOCUMENT_TOKEN_TO_BE_REPLACED
This entry was posted on Wednesday, August 19th, 2009 at 12:09 am and tagged with 2009, AL, Albert Pujols, Baseball, batting title, Joe Mauer, Mark Teixeira, minnesota twins, MLB, MVP, New York, NL, Philadelphia Phillies, Raul Ibanez, Ryan Howard, St. Louis Cardinals, Yankees and posted in Sports. You can follow any responses to this entry through the RSS 2.0 feed.
« The Decline of Tiger Doin Work Roundtable
The Classic Firecracker in the Butt »

9 responses to “Early Predictions for the MVP”