Fantasy sports are always frustrating. A win feels mildly satisfying, but a loss can make you hate everything about the sport or want to quit fantasy sports altogether. I’ll be honest, many of my man crushes come from players I’ve had on my fantasy teams, and pure hatred for a player has also come from fantasy short comings. With the fantasy baseball championship round upon us, I find myself in the finals in one league and a battle for 5th place in my other league. I figured this would be as good a time as any to run through the fantasy MVP’s, and steals of the draft for the season. I’ll only focus on the league that I’m in the Championship for, which also happens to be the league that I’m in with the blog mates. Here was our draft results for your refrence (Chappy 81 – Salsa Valverde, MCeezy – Holy ShirtsandPants, Dyslecix – No Use For A Name)

MVP’s: Hanley Ramierez, Matt Holliday, and Joe Mauer deserve  Co-MVP honors, and were three out of my first four picks. 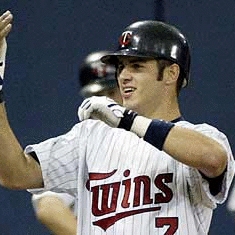 They are all ranked in the top twenty for the season, and undoubtedly helped my team get to the Championship round. Mauer should win the MVP award this season, but due to lame eastcoast media Jeter might skip away with the award much like Pedroia did.

Offensive steals of the draft: My team wouldn’t be where it is without Raul Ibanez (10th round) Carlos Pena (9th round), and Shin-Soo Choo (17th round). They were catalysts in my offensive power numbers combining for 86 of my teams 248 home runs on the season, which probably helped me win as nearly categories as the previous three mentioned players.

Offensive Bust of the Year: Milton Bradly. Although I didn’t pick him that high, I held onto him way too long. His season of below mediocrity explains itself.

Pitching and Steal of the draft: This year was always changing, but Felix Hernandez and Chris Carpenter were no doubt my horses. Chris Carpenter was the biggest steal I got on draft day as I picked him in the 19th round, and he ended up being the sixth ranked pitcher in Y! games.  He is also looksing like a lock for his 2nd Cy young award this season posting 16 wins and a 2.34 ERA.

MVP: Matt Kemp – This was a no brainer, as Kemp is the only player I had in the Top 25.

Steal of the Draft: Justin Verlander – I called this pick the steal of the draft before the season started, and his first few outings made me look like a fool.  However, to this point, Verlander has 16 wins and a 3.44 ERA to go with his MLB leading 245 Ks.  His slip in the draft is attributed to an injury riddled 08 campaign that produced some pretty ugly numbers.  So, getting a player of his caliber in the 11th round (124th overall) and seeing him ranked 27th in the fantasy ranks is a steal indeed!

Bust of the Draft: David Wright – Hard to call a guy who’s ranked #52 a bust, but when you chose him 4th overall, and you really wanted to take Braun, who ended up the 6th best fantasy player this year, it stings a little.  Actually a lot, seeing as how I don’t even want to keep the guy as one of my three keepers.  His average and stolen base totals were nice, but I was really expecting more than 10 HR and 60 RBI from my first round pick.  Could’ve been worse…. I could’ve had Jose Reyes or Grady Sizemore.

Honorable Mention: Mike Aviles – Tempting to include Nate McLouth (5th rd) or Scott Kazmir (8th rd) since they were picked higher, but Aviles’ complete lack of production gives him the nod.  I chose him in the 12th rd, two picks after Nelson Cruz, and basically handed him my SS spot.  1 HR and 8 RBI later, Aviles was done for the year, exiting with a stellar .183 batting average.

Co-MVP’s: Chase Utley & Ryan Howard – I remember logging on to our baseball draft at the start of the year and being sick that I was drafting at 11. Typically sitting at the backend of a draft can pay off and has its distinct advantages, however I typically want to avoid this draft spot in baseball for a variety of reasons. That despair quickly turned into optimism when big slugging Howard and his fabulous Philly counterpart Utley fell to 11 and 15 respectively. Any big baseball fan will be well aware of there numbers so I skip them, however offensively I have ridden them to a fantasy final for a 2nd time, and feel extremely good riding them the last two weeks for the title itself.

Honorable Mention: Jason Bay – Shocked he survived the entire turn back to me in the 4th round, his 35 home runs have been the perfect power addition to Utley and Howard. Although his batting average of .268 leaves much to be desired from a fantasy geek perspective, he easily deserves mention in anybody fantasy team MVP discussion.

Steal of the Draft: Andre Either – At the time I thought little of this pick in the 11th round, I knew the upside was there along several different categories but didn’t think much more about it. 31 home runs and 101 RBI’s later he easily goes down as my steal of the draft. By the way are you picking up on the trend here? My fantasy team this year was sporting some real power this year!! The real question I have now with Either is what’s his possible peak? Do I keep him next year over Jason Bay? Alas, a different topic for another day.

Honorable Mention: Heath Bell – In years past I’ve always discounted closers during my fantasy drafts, and by and large ignored them completely. However, over the last couple of years I have a new strategy with how to utilize them, and thus look for upside closers like Bell late in drafts. 37 saves later along 72 K’s he was a core aspect of my pitching staff all year long. With a price tag of a 16th round pick, he could easily have been my main steal of the draft as well.

Bust of the draft: Francisco Liriano – I’ll admit I was blinded by his pre-Tommy John career and thus most likely reached drafting him in the 5th round of the draft. Granted there isn’t a way to have forecasted such a terrible year, but I most likely should have looked else where drafting my first pitcher. In hind sight Adam Wainwright was the clear choice I dropped the ball on. As the baseball season winds down, Liriano can boast a brief stint in AAA, a demotion to the bullpen, and an ERA of 5.71 in only 119 innings. The word “bust” can’t describe my draft pick any better, and maybe it’s to understated, perhaps “Nuclear Implosion” is a bit better?

Honorable Mention: Cameron Maybin – Not much to say about this one. We drafted this year with the understanding that we were going to keeping three players for the following year, and Maybin was a gamble on the keeper front. Less then a month into the season it was readily apparent he couldn’t turn on MLB pitching and was getting over powered on a regular basis. Perhaps his upside will surface in the years to come, but this year wasn’t it for him. The cost of a 14th round pick was pricy for a player who I cut less than a month into the season.

Early Predictions for the MVP

Mauer has been my fantasy teams MVP this season, but does he have a case for the AL MVP this year? Currently ranked 3rd in Yahoo fantasy games, Mauer figures to be a top contender in the running for AL MVP. You can’t say that he’s been a huge surprise, because he’s always been an elite hitter consistently in the batting title race, but it’s his home run totals that have made his case much stronger for being the MVP this year. It’s pretty tough to argue with the man’s stats so far, .383 average (1st in majors), slugging .643 (1st in majors), 1.088 OPS (1st in majors), 25 homers (10th in AL), and 77 RBI’s on the season even after missing nearly the whole first month. It’s too bad the Twins are starting to fade back in the race for the central, but I feel he should win the AL MVP if he keeps his current pace. Who knows, a .400 batting average may not be out of reach either!

I don’t blame people for picking Mark Teixeira as he is having a great season with 30 homers and 86 RBI’s, but he hasn’t had the better overall season that Mauer has.

They are both top notch gold glovers on the defensive side at their positions, so that’s a wash. Besides, nobody picks the MVP based on their defense, because that’s what gold gloves are for. If I did for argument’s sake, I’d have to say playing catcher would have to be a little more difficult than first base. In evaluating an MVP, you have to include other factors like the ballparks they play in. The new Yankee stadium is obviously a hitter’s park, while the Metrodome is much more of a pitcher’s park. Maybe that doesn’t even out the home run totals, but when you look at the fact that only 11 of Teixeira’s homers are on the road, it has to be weighed in. The Yankees have scored sixty more runs than the Twins this year. I’d assume that that is why Teixeira has more RBI’s as he has more chances. Stats would support that as well as Mauer is hitting .403 with RISP, and Tex is hitting .258 with RISP. Who is more clutch for their team? Numbers say Mauer.

Many argue that the MVP should come from a team that is going to the playoffs. This definitely hurts my Mauer argument, but it’s unlike basketball where it’s basically a requirement to be on the best team.

Baseball’s voters don’t limit their view to the best teams as there have been 47 MVP’s that didn’t make the playoffs. It is one of the criteria, but it isn’t weighed nearly as heavily as football and baseball. If Kobe wants to try to take the MVP he can chuck up 50 shots a game, and surely he’ll average 35 per. Drew Brees can throw the ball 50 times in a game to put up crazy numbers (Wait, he already does that. Bad example.), but in baseball a hitter only comes to the plate once every nine players. He can’t control how many times he bats or if his teammates don’t do anything at the plate. So penalizing Mauer because his teammates are worse is unfair.

As for the NL MVP race, it’s pretty clear cut that Pujols is leading the way. He doesn’t look like he’ll win the triple crown, but it’s still not out of reach for him. He should be going for his fourth or fifth MVP by now, but for some reason the voters decided to pick someone that is more valuable to a team than him a few times. Most recently, I don’t see how Ryan Howard won the MVP over him last season. Not that Howards numbers weren’t incredible, but how can anyone really say that Pujols isn’t more valuable to his team than Howard?

The Phillies have three guys that can potentially win the MVP  every year. The easiest way to prove this theory is seeing how well Ibanez has benefitted from moving to a hitter friendly park and hitter friendly lineup. He is even in the race for the NL MVP if he can shake off the post injury rust. It’s like the Teixeira argument; he just has better players around him to help him put those stats up. Now that Pujols is matched with Holliday, his numbers should be indisputable by seasons end.