Things Are Looking Good In Sacramento 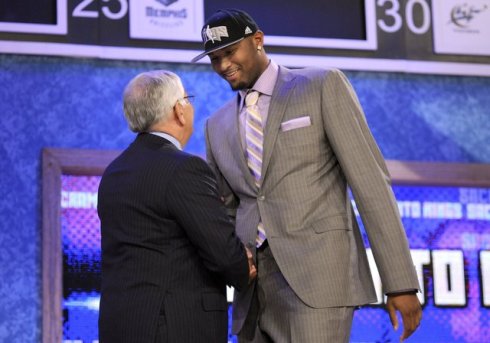 The Sacramento Kings have a pretty strong reputation when it comes to drafting. They’ve certainly had more Stojakovics, JWills, Tyrekes, and KMarts than they have Pervises, Abdul-Wahads, and Doubys. Either way, I don’t think I’ve ever seen the entire city, from management to the media to the fans, collectively on the same page. This is the same fan base that booed the selection of Peja Stojakovic in 1996. But this year, at every level, the sentiment was the same: get Cousins. The Kings did that, which wasn’t too much of a surprise due to the predictability of the first five picks, but it was the second round selection that really had fans buzzing. Hassan Whiteside was a lottery pick in many mock drafts, and a first rounder in the rest of them. Somehow, though, he slid all the way to number 33, and suddenly, a risky first round pick turned into a steal in the second round. The Kings have been trying to get bigger for 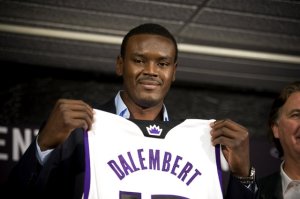 years now, and in a matter of a week, they can boast a frontline of Samuel Dalembert, Carl Landry, Jason Thompson, and DeMarcus Cousins. By the end of the night, they have another 7-footer, Whiteside, to add to their depth. Now set at the 4 and 5, there are two glaring holes on the roster: Point Guard and Small Forward. Now, I’m not convinced that Tyreke Evans can’t be a point guard in this league, and you can do worse than Beno Udrih, but the Kings desperately need a true point guard to run the offense. Out on the wing, a trio of Francisco Garcia, Donte Greene, and Omri Casspi is a pretty solid unit, but they need a guy who can consistently put up 15-20 points, rather than having to roll the dice each game trying to figure out which one of these three guys is going to show up that night. But this is all okay with me. Now that the frontcourt is set, the needs are clearer than ever for the franchise. The best part is, there’s plenty of assets, both financially and personnel-wise, for the front office to acquire some quality players to fill those holes. With the much anticipated draft in the books, let’s turn our attention to offseason frenzy that’s about to ensue – one that the Kings aren’t projected to be major players in, but can easily make some significant moves.

First, the Kings have about $15 million to play with. They’re not going to be a player in the Lebron sweepstakes, nor are they likely to land Chris Bosh or Amare Stoudamire, but they can go out and sign a proven NBA starter. Sacramento may not be the most attractive destination socially or geographically, but the Maloofs are one of the more player-friendly ownership

groups in the league, not to mention they probably have a few nice condos in Vegas to offer a potential free agent. While the Chicagos and Miamis are targeting the big names, Sacramento could easily make a solid play for a guy like Rudy Gay or perhaps even Joe Johnson. I don’t necessarily see it happening, but there’s no reason they can’t give it a shot. One other option worth exploring would be Ray Allen. Since Evans has shown the ability to get into the lane at will, it’d be a tremendous gain to get a guy who he can kick it out to on the perimeter. In addition to the cap space, the Kings have some solid trade assets. The aforementioned trio of Garcia, Greene, and Casspi won’t make anyone’s arm hair stand up, but they’d be a worthy trade piece for a team looking to dump some salary or an unhappy player. The Kings have also had a long running interest in free agent Nate Robinson, though he wouldn’t fill the PG or SF void. Kyle Korver or Mike Miller would be a nice addition on the wing. At the point guard spot, the Kings really need to make a serious play for a guy like Raymond Felton, Earl Watson, or Steve Blake. If not, maybe a package of Omri Casspi, Jason Thompson, and a first round pick would be enough to land Chris Paul. Okay, I’m getting a little ahead of myself. But with the additions made today through the draft, there’s plenty of reason for optimism here in the capital city.

7 responses to “Things Are Looking Good In Sacramento”