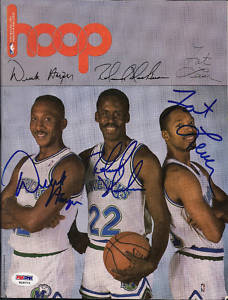 The Mavs are about the same age as I am, and they beat me to an NBA Championship. Even still, I think of losing when I think of the Mavericks, as a result of their first 20 years in the NBA. Their first coach, Dick Motta, took them from 15 wins to 55 in 7 years, but then he left and the team was in the cellar for the next 15 years. The bulk of those losing years were headed up by Richie Adubato, with Quinn Buckner doing a one year cameo and flirting with the all-time losingest record. Fortunately, the Kings were there to help the Mavs break losing streaks of 15 and 16 games. Sadly, neither of those were the longest streak of the year. They reached 20 consecutive at one point. I’ve been in attendance for a 20th consecutive WIN before, but I can’t imagine what they felt after a 20th straight loss.  That season has since remained the benchmark season for the franchise in my mind. But despite all the losing, they’ve had some pretty good players pass the through the tunnel at Reunion Arena. Here is my all-time Dallas Mavericks team, PRE-Dirk and Don Nelson……

Inactive List – Sean Rooks (gets the nod over Samaki Walker)

Let's Go Oakland....clap, clap, clap clap clap END_OF_DOCUMENT_TOKEN_TO_BE_REPLACED
This entry was posted on Monday, June 13th, 2011 at 9:10 pm and tagged with basketball, dallas mavericks, NBA and posted in Sports. You can follow any responses to this entry through the RSS 2.0 feed.
« Congrats Kidd and Dirk!
Elephants and Seals »