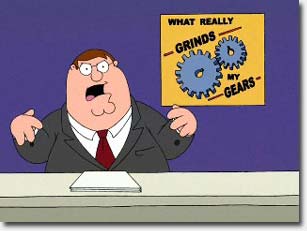 This could be a new installment that I’ll try out from time to time on the site, and it was inspired by none other than my favorite cartoon dad, Peter Griffin from Family Guy. Everyday we run across crap that is annoying or time wasting. Yesterday, I was about to put up a youtube clip of  catcher Greg Zaun having an inconcievably hard time throwing  the ball back to staff ace, Yorvi Gallardo. He threw three errant balls two that went about 25 feet, and one that sailed over the pichers head to 2nd base. None of the three were close, and it was pretty funny to see Zaun have that Snickers Betty White moment. Cmon Gregg! You throw like a girl!

What grinds my gears with this whole incident, is when I tried to put a clip up yesterday it worked fine, but since I was at work I didn’t post it right away. I wanted to proofread it before I posted it. When I previewed the post, everything looked good as far as the clip goes. A few hours went by, and I went back to the post when I had some down time at the office. I hit the preview button after editing it, and the video was already removed from youtube! I love how the NBA allows all thier clips to stay up, but what the hell NFL and MLB!?! Don’t you want more people viewing your sport, and getting some more publicity out of it? It’s not like youtube is making a killing off these random clips. I mean, how many people looked for Zaun throwing the ball!?! Couldn’t be more than 400-500. MCeezy’s clip of Buhrle’s Amazing Play was taken down because of copywright laws. It’s lame that all the baseball footage on youtube was filmed by a personal camcorder. Just look up Albert Pujols walkoff, and you’ll see what I’m talking about! Anyways, here’s the Zaun clip, until they take it down…

I'm a dude that just hit 30 years old. Pretty much like everything that is funny, insightful, and has to do with the Warriors, A's, and Raiders. END_OF_DOCUMENT_TOKEN_TO_BE_REPLACED
This entry was posted on Wednesday, April 28th, 2010 at 10:09 am and tagged with family guy, Greg Zaun, Gregg Zaun, Grinds my gears, laws, MLB copyright, rant, youtube and posted in Sports. You can follow any responses to this entry through the RSS 2.0 feed.
« Top Five Defunct Sports Franchises
Former Warriors Owner Franklin Mieuli Dies »