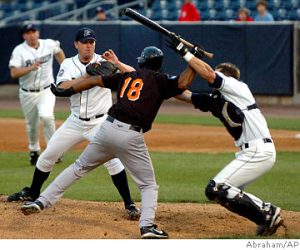 It seems as though everyone thinks baseball is on the decline, and that’s pretty tough to the latter with very few intriguing story lines for the casual fan this season. A couple weeks ago we saw the TV ratings come out that were very low, but the A’s were surprisingly up +48% as MCeezy quickly pointed out to me. We’ve seen attendance head south with half the teams drawing under 30,000 per game. The proclaimed best player in baseball just hit his 600th homer, but being a cheater and liar, so nobody seemed to care. The umpires are blowing calls left and right, and replay is still out of the question for some inconceivable reason. The worst part is even the umpires have said they wouldn’t mind it. In the YouTwitFace Era, we need instant gratification. We want everything now, and sitting through long baseball games everyday isn’t always that appealing. There are so many other options out there, it’s hard to keep anyone’s attention for very long anymore. How does baseball win back its viewers? Speed up games, and move into the YouTwitFace Era. Maybe even think about realignment to get people fired up about beating teams within their state/region. Maybe throwing out the whole AL and NL thing wouldn’t even be a terrible idea. I’d love to see a division filled with the California teams (A’s, Angels, Dodgers, Giants, Padres), I can already hear the smack talk between me and my friends. There’s no question that the DH causes games to be longer adding another hitter to the lineup. The AL games take close to a fifteen minutes longer to complete than NL games, so axe the DH. Maybe limiting the time a batter can step out of the box or putting a pitching clock up when runners aren’t on base (they already do that in college). There are tons of solutions, but baseball is so old school that they just don’t conform to the times. I will always love the game regardless of whether it conforms to the times or not, but if they don’t do something, they are going to be battling the NHL for the third most popular sport. One thing I’ve always liked about the NBA and NFL is that they do make an effort to make the game better for us, the fans. Hell, the NFL is looking into putting a mirco chip into the football to see if the ball crosses the goal line or first down marker, and why not use technology to their advantage! Have you ever heard someone regret starting to use the latest technology? Yeah, that’s what I thought…

There’s a ton of ways to get more fans interested in baseball instead of being heavily overshadowed by the Brett Favre and Lebron James decisions over the summer. First, in an effort to bring back the casual fan, I’d allow every memorable highlight go on youtube. I think not allowing millions of people enjoy the best plays/moments of the sport while they are working away in their cubicles is as big a travesty as Bob Davidson’s call that robbed the Marlins of a walkoff hit. I know that if they didn’t take the clips down so fast, I’d be posting random plays from the many unique things that you only see in baseball (there’s one every night). It’s one of the easiest things the league could do, and I already ranted about it, so I won’t keep rambling.

The next step would be to find ways to shorten the games. I feel like players take more time than ever between pitches, and really, watching a guy scratch his junk or hock up their chew for two minutes between each pitch is about as fun as listening to Justin Bieber. I like the idea of putting in a pitching clock, and don’t give guys more than a minute between pitches when a runner isn’t on base. It seems to be working well in the SEC, so that’s proof enough for me to think it would work in the MLB. The idea is not to rush the pitcher, but for us, and our ever shortening attention spans! We need something to stop daring us to channel surf when there is a slow moving pitcher is on the mound.

I’m not overly thrilled about getting rid of the DH, but if you can’t play in the field, I don’t feel like they deserve to be there? I’m an AL guy, but since chicks don’t dig the long ball quite like they used to, do we even need the DH that much anymore? Without PED injected monsters, most of the guys won’t be healthy enough to last into their 40’s, so if we don’t have these “older guys” in the league, everyone else on the roster should be able to play a position somewhere. Since we are moving from the home run era, and back to pitching and defense who needs the DH! I’m somewhat enjoying the small ball era so far.

It’s not speeding up the game, but instituting instant replay would be a major breakthrough for the sport. Nobody wants to spend three plus hours watching a game, only to have a blown call at the end decide it. Having the wrong team win the game never leaves anyone feeling good. Even the team that won, usually doesn’t get the same good feeling of a hard fought victory. They should do it somewhat like the NFL, and give both coaches challenges that can be used on non-balls and strikes calls. I highly doubt it would be abused. Or even limit them to one challenge, and if they win their challenge they get another one for getting it right. We have been in a technology boom since the mid 90’s, so why are we stuck in 1950 with baseball technology. The human element is as overrated as 3D movies.

Lastly and maybe most importantly, I’d get rid of Selig. Put someone in charge that was born after 1900, and is somewhat up with the times. Selig has run baseball into the ground with the strike, allowing PED’s, and pretty much made the worst choice in almost every scenario like the All-Star game. Speaking of the All-Star game, I’d like to see the fans vote for who finishes the game instead of starting. Like say, put all the players that the fans want to see in the game in the 6th and 7th innings. It’s hard for me to say this, but David Stern is a better commissioner than Selig . I still don’t understand how it’s taken 16 months and counting for Selig’s committee to review the A’s stadium situation. I think I could’ve reported something to him if you gave me over a year, alas, it seems like the A’s are stuck in the Coliseum forever… Sure, we know that Selig speaks for the owners, but I’m sure the owners want to make more money, and the way it is now, baseball’s popularity will only decline in the years to come if it doesn’t make some changes.

There are lots of young stars coming up that aren’t getting marketed as much as they should be. I’m actually fine with baseball the way it is if they don’t change anything, because I feel like baseball’s decline in popularity is making it into a sport for the “hardcore” fan. Kind of like soccer or hockey in the US, not wildly popular, but there are “hardcore” fans that follow them intensely. They say baseball is our national pastime, but I think the NFL took that title awhile back, and even the NBA gets more attention. I was really rooting for Cuban to win the bidding war for the Texas Rangers, so he could get crazy with the commissioner as an owner, and say or do the wild outlandish things that he’s done as the Mavericks owner. He’d probably even side with the players union from time to time, but he didn’t win, and baseball will remain the same. It’s probably good for the A’s that Cuban didn’t win. I don’t want to see the Rangers with a $200M payroll killing the West every year. I really hope they make a movie or 30 for 30 out of the whole Rangers sale process leading up to the auction, because it sounds like there was some solid drama in it. Baseball needs a real leader, to progress this sport to make it better for fans. I don’t necessarily agree with the changes we see in the NFL or NBA all the time, but I’ll give them credit for seeing if it works Selig never even gives us that.

I'm a dude that just hit 30 years old. Pretty much like everything that is funny, insightful, and has to do with the Warriors, A's, and Raiders. END_OF_DOCUMENT_TOKEN_TO_BE_REPLACED
This entry was posted on Sunday, August 8th, 2010 at 2:55 pm and tagged with All-Star Game, Baseball, big changes, blown calls, Bud Selig, Instant replay, least popular major sport, losing popularity, low, Mark Cuban, MLB, old school, pitching clock, popularity, realignment, sucks, TV ratings, what's wrong, youtube clips and posted in Sports. You can follow any responses to this entry through the RSS 2.0 feed.
« That’s The Bizness
Let the Chris Carter Era Begin! »

7 responses to “Baseball Needs Some Juice”