Rice Less Than Impressive on His Nationwide Debut 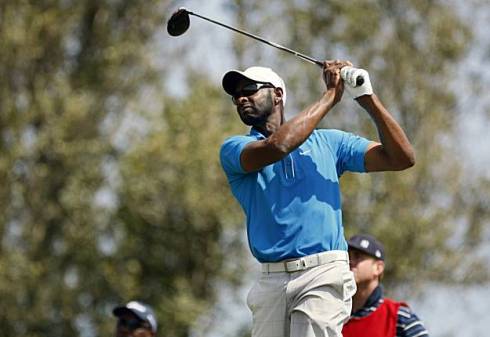 Jerry is Keepin it Classy

We debated earlier this week on what the over/under for Jerry Rice should be in his first professional golf tournament at a very tough TPC Stonebrae course in the Bay Area. We had set the over/under at 85 eventhough Rice was reported as a scratch golfer, we assumed he’d struggle a little in his first event, and weren’t shocked by his opening round. Yesterday he shot an 83, which I was happy about becuase I picked the under, but other than that it was a less than impressive showing. He played like an ameteur, recording five bogeys, and four double bogeys, but wasting 20 years playing that silly pigskin game might have cut into the 47 year old’s time to work on his swing so we can give him a pass.

“My score is up there,” Rice said, shaking his head. “I wanted to at least shoot my jersey number (80). When so many bad things happen, you start to press.I felt like I had to hit it close and had to get birdies. … I feel like the wheels completely fell off today.”

Rice has always been a classy guy, and I’m sure he had some nerves out there that made him shank a few more shots than he would on a normal round. To his credit he took the high road, and didn’t seem to be shaken keeping his composure when he made a bad shot or two unlike that guy named Tiger. He shot nine over on the first 8 holes, and then settled down shooting only one over for the next nine, but got a double bogey on the 18th. The score put him in a tie for 153rd of a field of 155. Now that he knows what to expect maybe he’ll shoot lower today. Looks like he’s only two over through six holes so far. That’s already a big improvement over yesterday’s front nine.

So police reports were released regarding the incident revolving  “Big Ben” Roethlisberger at an Atlanta night club last month, and it was ugly.  According to the reports, the accuser, a 20-year old woman who is a college student, was escorted to a hallway by Roethlisberger’s bodyguards in which Roethlisberger soon followed.  Supposedly Roethlisberger exposed himself to the woman, she quickly informed him that his actions were unacceptable.  She then fled to the bathroom.  Roethlisberger followed then proceeded to have sex with her.

If you want to read up on the story, there are plenty of sites for that.  This post isn’t to inform you of breaking news, because I’m sure you’ve all heard the details of the report.

This post is just me giving you my opinion.  Roethlisberger needs to be punished.  I know he wasn’t convicted of anything, but these accusations aren’t to be taken lightly.  Think about what might have happened that night.  He essentially raped this young woman, and walked away.  Treated it like just another night.  This is horrible beyond comparison.

I’m all for giving people the benefit of the doubt, but I hope the NFL investigates this to the best of their abilities.  This entire situation is a disappointment.