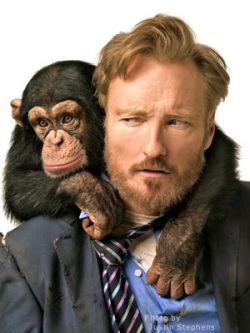 Our favorite funny man will be returning to his late night throne. We here at Doin Work have a special connection to Conando, because he is our generation’s best late night show host. Conan O’Brien has agreed to terms with TBS, and will be starting his late night show in November at the 11:00PM slot. This will move George Lopez’s show to midnight. Make what you want out of him pushing someone back a timeslot after he had the same thing happen to him, and caused a huge uproar, but in my eyes Conan can do no wrong. Most had predicted he would go to Fox, but he ended up going to TBS. Lopez welcomed him to the network last night on his show saying that he would happily move time slots to accommodate Conan, and that they would be the best late night duo out there in a pretty weak list of options. Personally, I thought wherever Conan landed he would instantly give the station he went to the best late night show. I’ve been a huge fan of his for the past decade, and probably watched late night TV two or three times a week when he was on. Now I’d rather just watch a rerun of Family Guy or The Office, so it will good be good to have a little Coco back in my life next winter. Conan had this to say about getting the new show, “In three months I’ve gone from network television to Twitter to performing live in theater, and now I’m headed to basic cable. My plan is working perfectly.”

I can’t say the Lopez Show really piqued my interest at any point in its existence, so moving it back an hour won’t be making me stay up any later to watch it. I’m not a fan of George’s comedy, but I do like him as a person. He used to come into my old workplace a lot (Pebble Beach) and would hand out money to people, and make fun of my bosses. He once tried to give me $100 for giving him a ride up to his car after his round. I told him it wasn’t necessary, and he said everyone has to eat, so I accepted. At the AT&T Pro-Am tournament he regularly throws wads of $20’s into the crowd making it rain on the 18th green before he posts his scorecard. The guy is plain unselfish, and is the kind of guy that wouldn’t mind giving the spotlight away to Conan.

I'm a dude that just hit 30 years old. Pretty much like everything that is funny, insightful, and has to do with the Warriors, A's, and Raiders. END_OF_DOCUMENT_TOKEN_TO_BE_REPLACED
This entry was posted on Wednesday, April 14th, 2010 at 9:36 am and tagged with 11PM, 12PM, Conan O'brien, generous, George Lopez, Late Night Show, TBS and posted in Comedy, News, TV. You can follow any responses to this entry through the RSS 2.0 feed.
« Texas Stadium Demolition
Sharks Need to Swim, Not Sink »