Crack a Bud Light and Light Up a Stogie 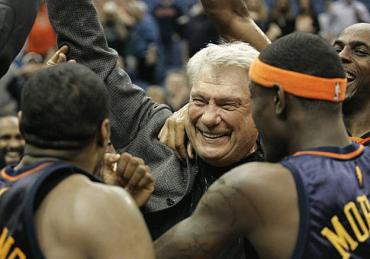 Our fearless, and sometimes heavily buzzed coach, Don Nelson, got his all-time wins record today. He surpassed Lenny Wilkens for all-time wins as a head coach in the NBA with 1,333 victories. You can guarantee that Nellie is going to party like it’s the 70’s(that’s when he started), break out a Hawaiian shirt, crack a Bud Light, and light up his victory stogie. This was the last noteworthy milestone that the dubs will probably make this season, unless Curry snatches that ROY award away from Tyreke (27 points, 14 assists, eight rebounds and seven steals tonight btw). Or maybe if they hit the lotto in the draft. That’s not what this post is about though.

I wanted to thank Nellie for his couple stints with the Warriors. If it wasn’t for him, we’d probably have zero playoff appearances in the last two decades. He might not be the most celebrated coach of all time, because he never had the “superstar” that could win it all with him. I’m still happy for him though, and even happier that he got the record this year instead of having it loom over the whole off-season. It will be interesting to see if the W’s keep him around. I guess it all depends on how the hunt for a new owner goes. My heart says that I should want him to stay, but maybe his time is up in the Bay Area. I doubt the next owner will let do whatever he wants like the current management does. I’d go as far to say that a new owner would make him play guys like Randolph 30 minutes a game just to see what he’s got in the mental department. We know we have a lot of talented players, but can any of them develop or stay healthy? From what I’ve observed, it might be hard for them to learn under Nellie, and his always infamous doghouse.

One other problem I have with all this winning (4 of their last 6), is that we are beating all the teams that we are trying to take ping pong balls from! At this rate we’re going to end up with the 7th or 8th pick. Didn’t they hear the word? Wall, Cousins, Favors, and Turner have declared for the draft? Tank the rest of the year boys, we NEED a top four pick! Hopefully Nellie will kick back now, and we can tank the rest of the season in style.

I'm a dude that just hit 30 years old. Pretty much like everything that is funny, insightful, and has to do with the Warriors, A's, and Raiders. END_OF_DOCUMENT_TOKEN_TO_BE_REPLACED
This entry was posted on Thursday, April 8th, 2010 at 12:26 am and tagged with 1333, Don Nelson, Draft, golden state warriors, lottery, record, wins and posted in Sports. You can follow any responses to this entry through the RSS 2.0 feed.
« Doin MLB Predictions
Rich Eisen Vs. Football Prospects »