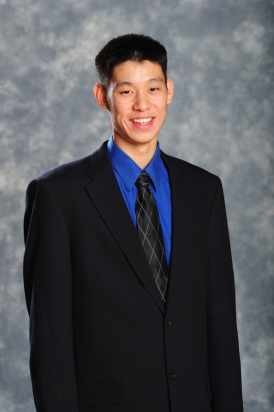 If you haven’t heard of Jeremy Lin by now, you’re probably not a basketball fan. The Harvard grad, turned D-leaguer, turned Warriors back-up PG, turned Knicks starting PG has been the talk of the league over the week. Back in early 2010, Jeremy Lin burst onto the scene in the Summer League scorching John Wall over and over. To say Mceezy and I were excited when he joined the Warriors that 2010 summer was an understatement not that we expected him to do much, but just the fact that he made the team was impressive. I’m surprised it took me this long to write about him since I did try buy his jersey for my girlfriend who’s last name happens to be Lin, and her parents are also from Taiwan, but never did because I didn’t think he’d make it. He sure showed me!

I always had my doubts about him, but he is proving to everyone that he does belong in the league. I think the biggest thing is people don’t expect an Asian kid from a Ivy league school to succeed in somewhat of a racial profiling, but he sure is. It’s rare that Asian’s are the big news in the sports world, and for a week I didn’t have to go to Weird Asian News to get my fix. It feels like when Tiger broke into the “white” golfing world. Lin is breaking into the “black” basketball world. Would he get any press if he wasn’t Asian? I doubt it.

Whether he has lasting power or not remains to be seen, but you have to believe he’s going to keep the starting job for awhile based on how bad Douglas and Shumpert have been in the same starting role. It’s not that he’s just starting it’s that he’s lighting up his opponents.  Even though he played the Nets, Jazz, and Wizards, he did face two solid point guards in Wall and Williams, and still put up impressive numbers. Sure, the devils advocate would say he let Wall and Deron go off, but D’antoni never cared about defense anyways, and in the end the Knicks are 3-0 when he plays over 25 minutes.

When I watched him play twice this week he reminded me of someone like Jose Calderon or Andre Miller. Most of Lin’s moves are fairly predictable, but he takes advantage of what you give him. If it’s an open lane, he’ll drive and won’t shy away from the contact. If someone is open, he makes the pass in a not so flashy way, basically making the “smart basketball play”. It’s strange because you shouldn’t be overly scared to face him, but at the same time you can’t sleep on him either or he’ll make you pay. He still needs to work on his jumper, but it’s amazing he’s hitting over 50% of his shots from the field. Should be fun to see the Yellow Mamba take on the Black Mamba tonight to see if he can keep it up!

I'm a dude that just hit 30 years old. Pretty much like everything that is funny, insightful, and has to do with the Warriors, A's, and Raiders. END_OF_DOCUMENT_TOKEN_TO_BE_REPLACED
This entry was posted on Friday, February 10th, 2012 at 11:25 am and tagged with basketball, harvard grad, ivy league school, jeremy lin, NBA, new york knicks and posted in Sports. You can follow any responses to this entry through the RSS 2.0 feed.
« Pebble Beach Stories Part VI: Tiger Woods
Jeremy Lin Valentine Day’s Cards »